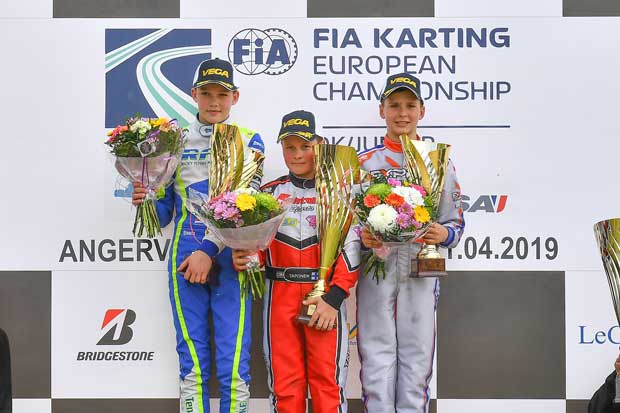 Finn driver Tuukka Taponen has dominated the final of the first round of the FIA Karting European Championship at Angerville, France in the OKJ class. Ten Brinke and Day completes the podium. 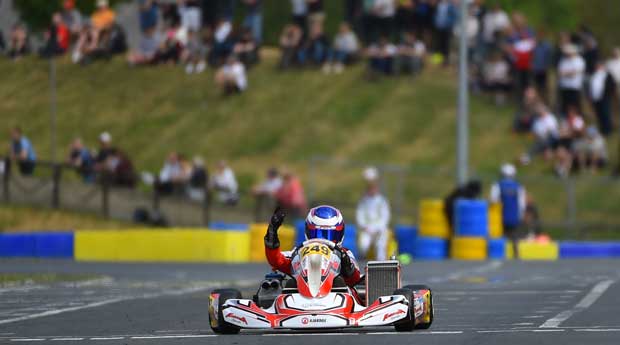 An early crash at the start between James Wharton (FA Kart/Vortex/Vega) and Maceo Capietto (KR/Iame/Vega) caused a big moment of confusion at the first turn with both drivers retiring from the race together with Samuli Mertsalmi (Tony Kart/TM Racing/Vega) who retired at turn 2. Dani Briz (FA Kart/Iame/Vega) had to went off to avoid the crash with Wharton and Capietto, this caused promoted the driver from DPK Racing to the last place. Meanwhile in the lead of the race, Tuukka Taponen (Tony Kart/Iame/Vega) escaped quickly from Tymoteusz Kucharzyk (Parolin/TM Racing/Vega) who took the second place. Kucharzyk was unable to keep the pace of Taponen, so the Polish driver had to defend from Thomas Ten Brinke (FA Kart/Vortex/Vega) who overtook his team mate Conrad Laursen (FA Kart/Vortex/Vega). Behind them, Maxwell Dodds (KR/Iame/Vega) and Cristian Bertuca (Birel Art/TM Racing/Vega) made contact and had to retire as well. As the race was on, the gap of Taponen was that big that the focus of the race was the battle for second place. Conrad Laursen after overtaking Ten Brinke on lap 13, tried the move on Kucharzyk for the second place. The Danish driver made effective the manouvre on lap 16, but Ten Brinke stole the place to his teammate two laps later. Laursen drop more positions and had to retire after a crash with Evan Giltaire (Sodi/TM Racing/Vega). This let Jamie Day (Exprit/Vortex/Vega) to take the third position. The UAE driver despite had to deal with the pressure from Catalan Josep Maria Martí (Tony Kart/Vortex/Vega) who finally could not get into the podium. Taponen after 21 laps crossed the finish line with a lead of 6 seconds from Ten Brinke and Day. Martí finished fourth just in front of Ugo Ugochukwu (FA Kart/Vortex/Vega) who completes the top5. The next round of FIA Karting European championship will be held in the Belgian circuit of Genk during 16th to 19th of May.

Preguntas? Escríbenos staff@mag3.media
TKART
Legal
Síguenos
© 2020 Sorridi Editore Srl. All Rights Reserved P.IVA IT04797440965
Powered by Mag3
Our website is made possible by displaying online advertisements to our visitors.
Please consider supporting us by disabling your ad blocker.
Más historias