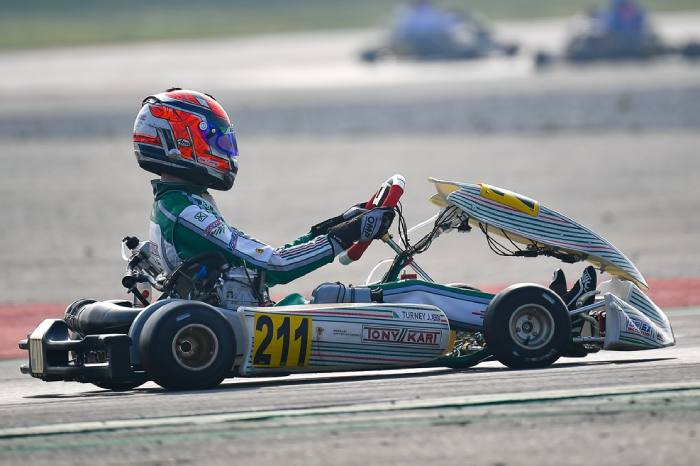 On the occasion of the first event of 2021 season at the Adria Karting Raceway, our team is third in OKJ category with Harley Keeble.

Excellent signals are coming from the first official engagement of the 2021 season for our Tony Kart Racing Team. On the stage of the Adria Karting Raceway, the WSK Champions Cup is the first occasion to see the new – but also the “already known” – official drivers on track, at the wheel of the tested Tony Kart Racer 401R (KZ2, OK and OKJ categories) and Tony Kart Rookie 2020 (MINI category), as usual powered by Vortex engines.

In OKJ class, Harley Keeble fights for gaining the success in the final, signing the best lap of the race and finishing on the third step of the podium. The British driver collects a record streak of four victories in the qualifying heats (in addition to a fastest lap), equaling such results also in the pre-final. James Egozi hits the top 10 in his “first time” in the category, delighting with a four-position comeback; it wasn’t the only one, since the American also performed well in the heats and in the pre-final, the latter ending in seventh position.

Having been promoted to OK category this year, Tuukka Taponen did not disappoint expectations and, on the contrary, was immediately competitive against his more experienced rivals: second position in the qualifying heats, a victory in the heats and a third position in the pre-final (with the record for the fastest lap) as well as fourth in the decisive final. With the title of vice-world champion, Joseph Turney confirmed himself as one of the fastest drivers of the weekend, seventh in the final, in which he was the victim of a few collisions. The British driver stands out for a second place in the qualifying, a victory in the heats and, again, a second place in the pre-final.

A negative weekend for our world champion Callum Bradshaw, at the start of the final where even though he made a good comeback, was never able to exploit the full potential of the material at his disposal. Unlucky, on the other hand, Alfio Spina, who had to stop in the final; the Italian, at his debut in the category, grew steadily in all the three days, up to a fifth place (with a +6 in the figures of the gained positions) in the pre-final.

In KZ2 category, Pedro Hiltbrand‘s performance was always on the rise, gaining a good fifth place in the final. The Spaniard had started the weekend with a seventh place in the qualifying session, recovering several positions in all the heats, where he also achieved a fast lap and a second place, followed by a fourth place in the pre-final. Simo Puhakka finishes behind his team-mate, moving up not less than six places. The Finnish driver also distinguished in the qualifying heats with a second place as his best result. No less impressive is Gilles Stadsbader, third place in the final among the drivers of our Racing Team and able to recover 10 positions (compared to qualifying) at the end of the various heats. At his debut with our colours, Josef Knopp shows encouraging performances in view of the next appointments of the 2021 season.

In the MINI, Jimmy Helias was also one of the favourites for the top step of the podium but, due to a collision caused by another competitor, he ended the final race early. It’s a pity because the Frenchman’s run was one of the best: fourth in the qualifyings, two second places as best result in the heats – to which a fast lap must be added – and fourth also in the pre-final.

The Tony Kart Racing Team is still engaged at the Adria Karting Raceway from February 24th to 28th for the dispute of the first round of the WSK Super Master Series.