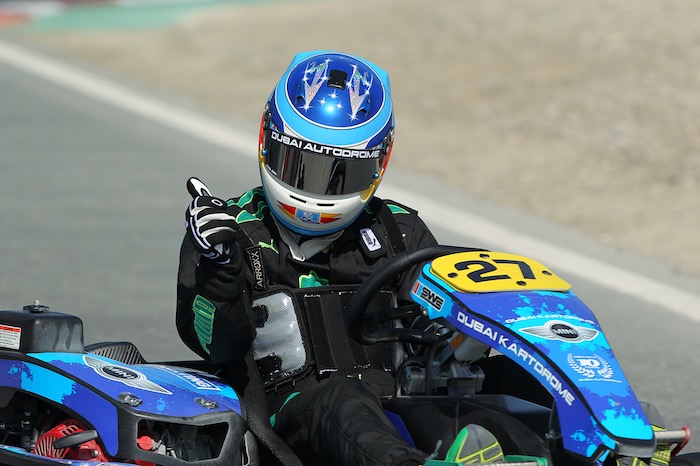 Two-time Formula One World Champion driver Fernando Alonso will lead an all-Spanish kart team, FA Racing, alongside former Formula One driver Pedro de la Rosa, Spanish karting ace Alberto Albilares and Spanish GT Champion Ángel Burgueño in the fourth and final round of the 2019 Dubai Kartdrome Endurance Championship Powered by Motorsport Wheels coming this weekend (13-14 December).
Up to 38 teams are expected to challenge the 24-hour endurance race on the Monaco Circuit Configuration at Dubai Kartdrome, with many international squads flying into Dubai to take part in the renowned karting event which is now celebrating the 15th edition.
Alonso is a regular visitor to Dubai Kartdrome and has competed in previous Endurance Championship rounds (2014, 2017), with his team finishing in the top ten. This year he returns with the goal of getting FA Racing on the winner’s podium. 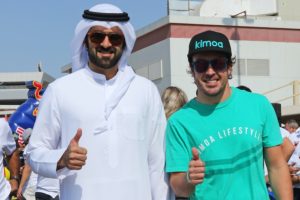 Dubai Kartdrome Manager David Bright said, “We’re delighted to welcome Alonso and his team back to the Endurance Championship for the third time. Their professionalism and passion for the sport is second to none, affirmed by the fact that they are willing to swap their million-dollar race machinery for go-karts and simply enjoy racing.”
“This also demonstrates the world-class level of racing at Dubai Kartdrome which has attracted top racing talent from around the globe.”
The all-star Spanish team will be up against some strong local competitors, including the defending Pro champion, Bin Drai Karting Team and current Pro championship leader Emirates Racing. 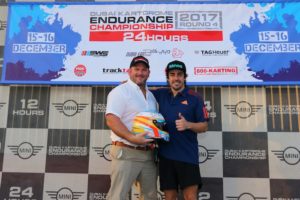 Experienced international teams will also by in the mix, with reigning Nations Cup champion LD Russia an expected favourite, along with the fabled return of the event’s most winning team, Batelco, which is now returning under the banner of Racing BH.
In the Corporate category, defending champion Team Emirates has a narrow lead over LD Russia going into the deciding round, with everything to win or lose in the final 24-hours of racing.
Bright added, “We are looking forward to watching all of the teams compete on track in the final round and I am hoping to see Alonso make the podium; I know he won’t accept anything less.”
About the Dubai Kartdrome Endurance Championship
Since 2005 teams from around the world have come to Dubai to challenge this extreme endurance race series. Each round of karting is as tough as it gets, requiring tremendous stamina, speed, concentration and team work simply to finish a race, which can take 12 or 24 continuous hours.
The championship is run over four rounds, which each round having a different objective. Round One is 12 hours of endurance racing, Round Two goes for 600 laps and Round 3 is run for 700 kilometres. Round Four is the grand finale, pushing teams for a grueling 24 hours on track.
There are two main categories of racing, Pro and Corporate, as well as a Nations Cup for teams with drivers of all one nationality.
About Dubai Kartdrome Outdoor Circuit
The 1.2km International Circuit at the Dubai Kartdrome features 17 corners to test a driver’s skills, as well as a tunnel and bridge to add to the excitement. This challenging configuration affords maximum safety to all drivers and spectators and is equipped with a complete set of flood lights to offer perfect viewing for night time racing.
Since 2004 the venue has hosted many local and international karting races, as well as offering corporate events and Arrive & Drive karting for guests.