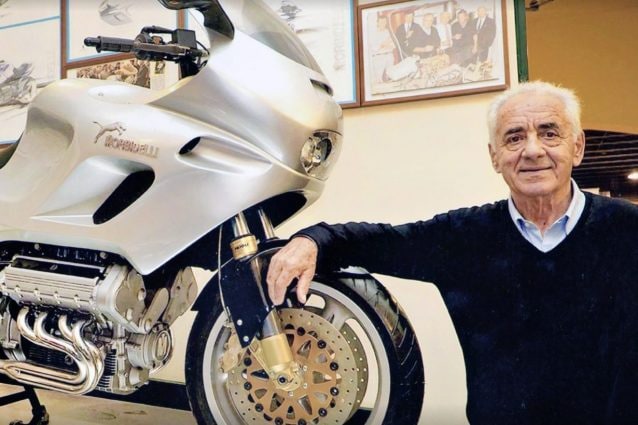 Giancarlo Morbidelli, founder of the historic Italian motorcycle manufacturer who made the history of the World Championship during the 1970s with his racing bikes, died yesterday, Monday February 10th 2020, in his hometown of Pesaro.

Already an enduro rider in his youth and always passionate about engines, Giancarlo’s adventure as a manufacturer began in the 1960s.

What at first seemed like a simple hobby, started in a workshop located in a corner of his woodworking machinery factory, would develop into a real racing department in just a few years, capable of winning four World Drivers ‘Championships between 1975 and 1977 with Paolo Pileri, Pier Paolo Bianchi and Mario Lega, battling against some the giants of the world motorcycling industry, as well as three constructors’ titles.

Thanks to Giancarlo’s passion and unwavering determination, the Morbidelli name would  go on to become synonymous with pioneering technical solutions for both motorcycles and 2-stroke engines.

A success that did not fail to also leave its mark in karting, engraving the name of Morbidelli in the history, especially, of the shifter category. Its engines, in fact, had great luck among the gear-box karts, both in their twin-cylinder and single-cylinder versions, the latter entering production after the Federation made single-piston configuration mandatory.

The editorial team of TKART participates in a very emotional way in mourning also for the friendship that binds us to Giancarlo’s son, Gianni, an F1 driver that TKART has proudly boasted in his staff as a special tester for several years. In addition to him, our condolences and thoughts, together with those of the readers of TKART, go to all family members and especially to his wife Augusta and daughter, Letizia.