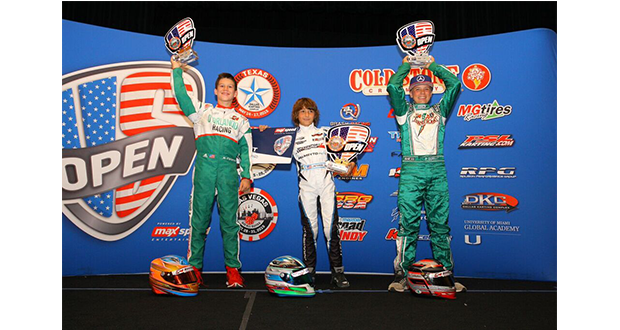 Nicholas d’Orlando shined in the bright lights of Las Vegas as he took home a Rotax US Open Series podium finish, showing once again why he is one of the best drivers in Mini Max. Running up front all weekend long, it came down to the final race to crown the US Open Mini Max Series Champion.

[dropcap]N[/dropcap]icholas kicked off his race weekend with an impressive pole position qualifying effort on Thursday, and followed that up by putting his No.115 KoeneUSA prepared Tony/Kart in second spot in Heat #1, while earning fastest lap honors in the process. Nicholas would start Friday’s race day off right finishing second in both heats #1 and #2 to Tyler Gonzalez. After some further adjustments were made in attempt to roll in Gonzalez, Nicholas would finish the 4th and final heat in the 3rd spot. The adjustments proved to find the necessary top end speed at end of the straights that he needed but proved to be a little more challenging thru the corners.
A confident Nicholas would head into Saturday’s final as one of the drivers to beat. He knew Gonzalez would be tough competition, but it was the need for a solid finish ahead of points series contenders Jak Crawford and KoeneUSA teammate Payton Durrant that would seal another championship. Nicholas hoped for a little bit of that famous Las Vegas Lady Luck to go his way. Unfortunately, it

[one_half_last]
it was not in the cards as engine failure before the green flag flew left Nicholas watching the feature race from the infield and a disappointing way to.“It was a pretty tough way to end a race weekend,” said Nicholas. “We had a good fast kart, on a track that I’ve never raced before. We made some adjustments to find more speed and we found it. My kart was fast all weekend. Unfortunately, parts break and you can’t control that. It is very disappointing but that is part of racing. I am proud of how hard we worked, we did all we could to win but we just came up short.”
DRC would like to extend thanks to their team at KoeneUSA (www.teamkoeneusa.com), including Mike Maurini, Martijn Koene, and his mechanic Matt Long for their continued hard work, support and dedication. Furthermore, a special Thanks to the support of their sponsors at adidas Motorsport (www.adidasmotorsport.com), Kool Nerd Clothing (www.koolnerdclothing.com), Focused Project Management (www.focusedpm.net) and Iona Preparatory School (www.ionaprep.org).

Davide Forè: Jarno Trulli was such a great talent!