TUBE DIAMETER
Crossbars and stringers are all 32 mm in diameter, a common choice on KZ chassis

CRG launches the new and improved Zuera B Gold Line, the latest intepretation of its classic Road Rebel, and wins the top two spots of the KZ World Championship podium

On September 13 (2015), CRG, one of Italy’s historical manufacturers, returned to the top spot of the CIK-FIA World KZ Championship podium, on the legendary Le Mans circuit in France.
The star of this great victory was Dutch driver Jorrit Pex, who beat rivals to the finish line aboard the new Road Rebel Zuera B Gold Line kart with TM engine.

CRG’s triumphant “world campaign” was completed by the second place finish, achieved with Italian driver Paolo De Conto. This outstanding 1-2 sweep proves, beyond every reasonable doubt, that the success driven by Giancarlo Tinini is anything but happenstance. The team confirmed once more team that winning is in its DNA and the new chassis, an innovative rivisitation of a CRG classic, immediately showed its exceptional potential.

TKART wanted to uncover all the secrets behind it, so we took a trip to the CRG headquarters in Desenzano del Garda right after the World event and took a close look.

The Road Rebel is homologated for the KF4, KF3, KF2, KZ2, KZ2, and ICE categories. We focused on the model that competed in the KZ World Championship, the Road Rebel Zuera B Gold Line, where B stands for the 2015 version and its revisitation of several key aspects compared to the 2014 homologation. 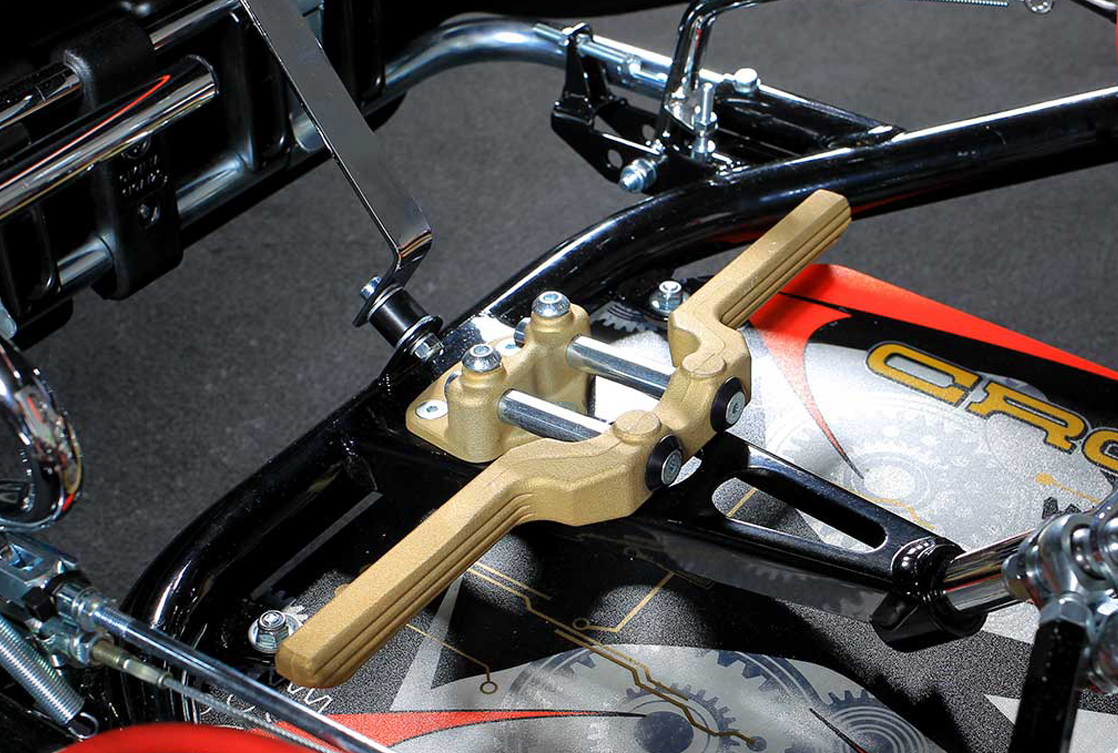 FIRST-SECOND AT THE ’15 KZ WORLD CHAMPIONSHIP 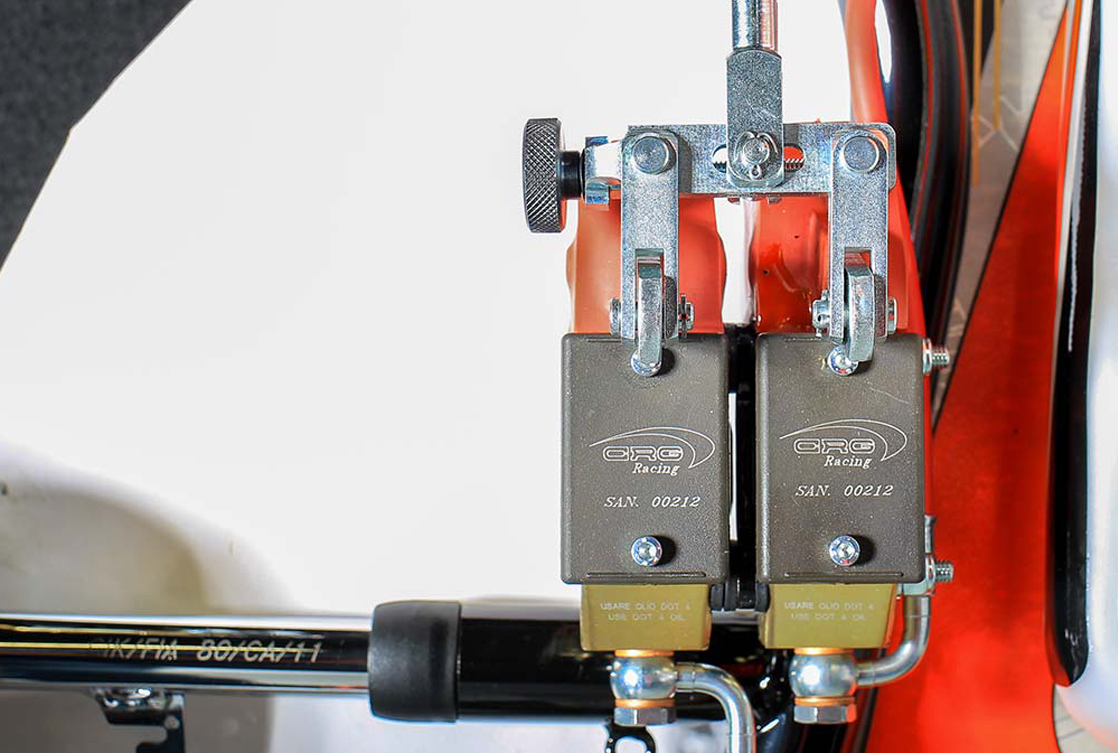 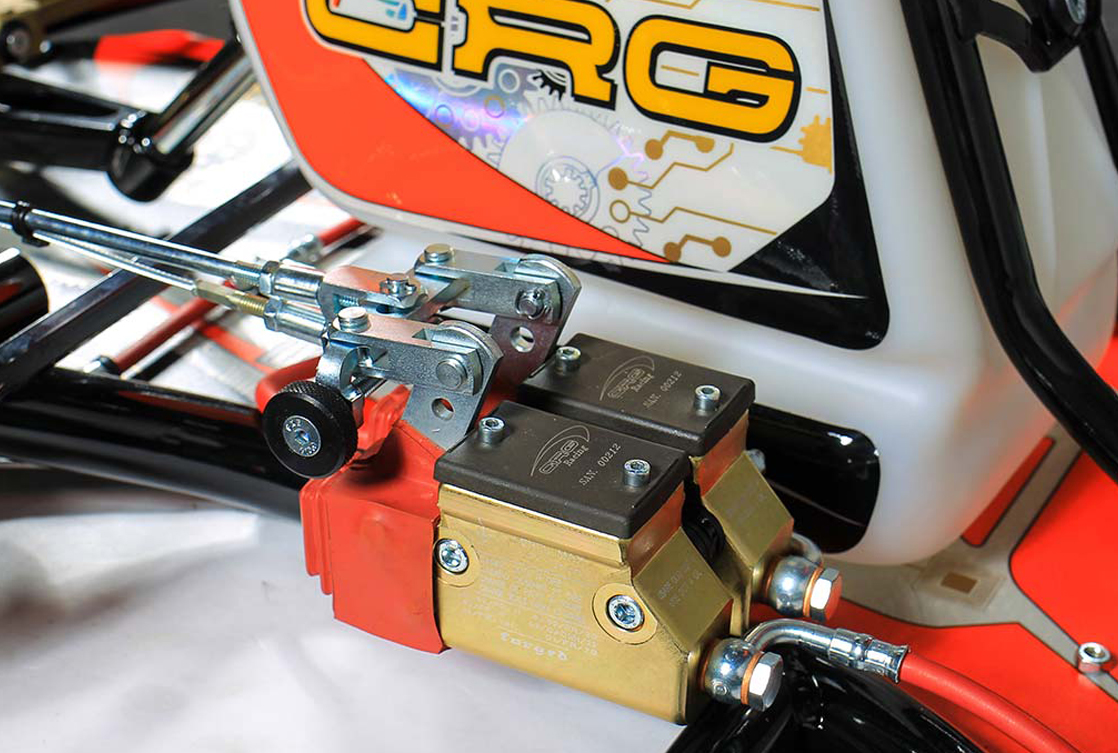 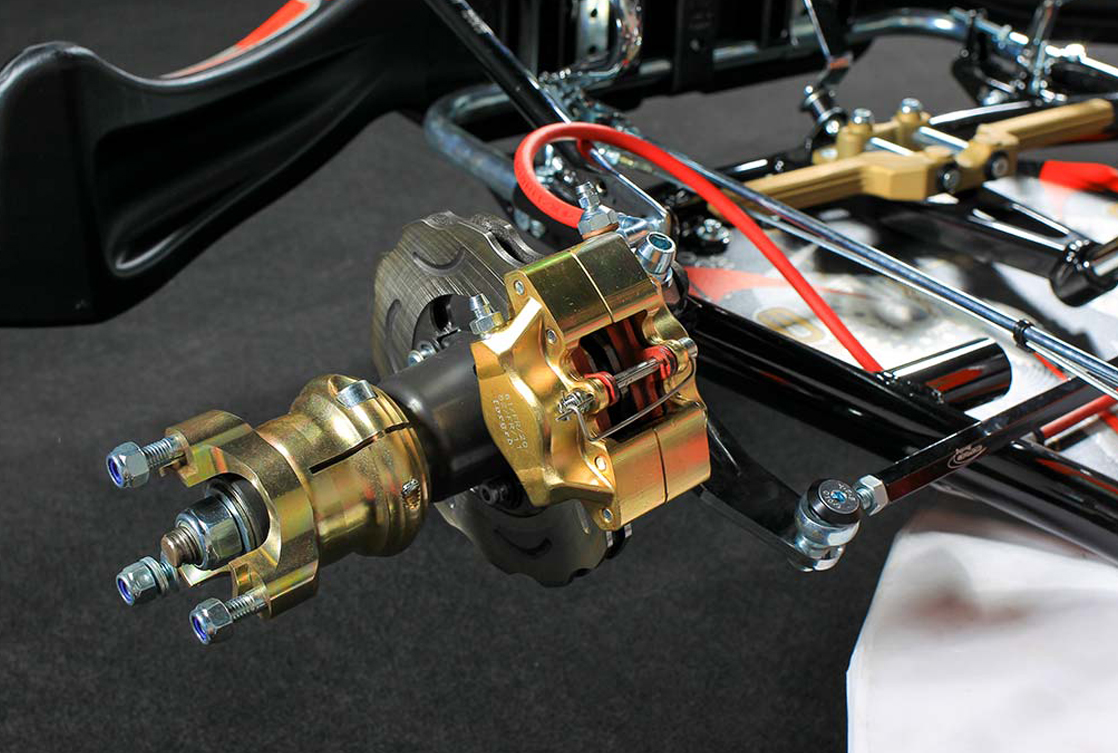 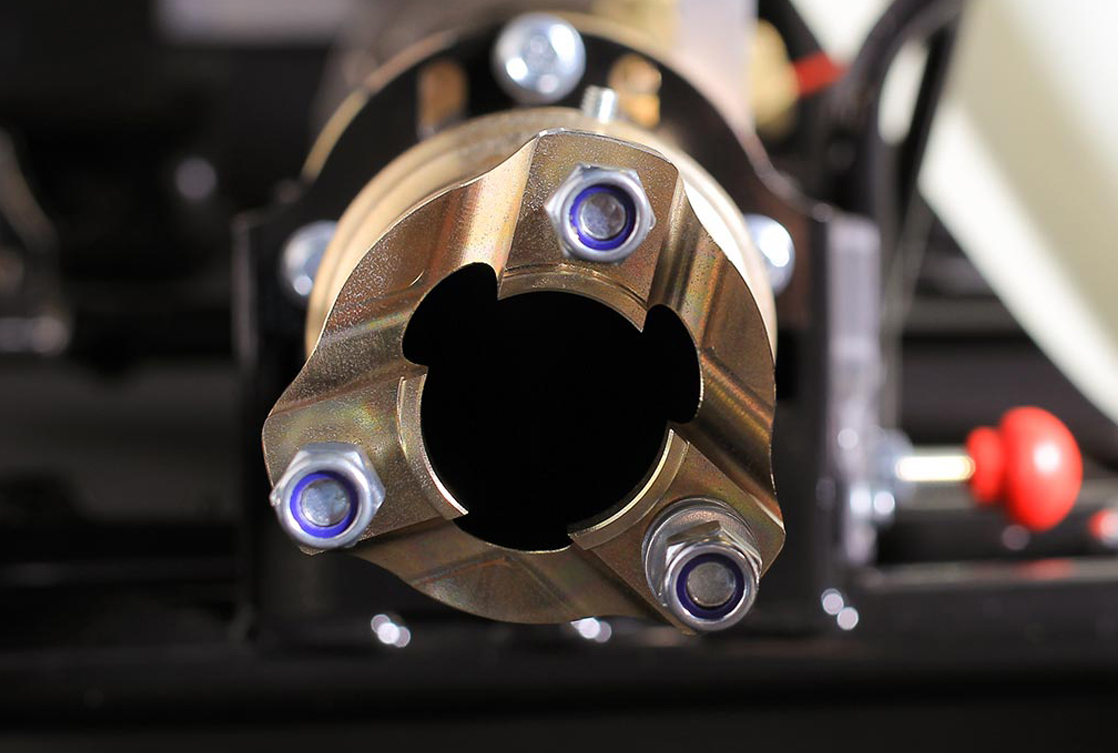 Overview and close up (below) of the new wheel hubs, processed with three “chiseled” sections on the contact area that meets the rims 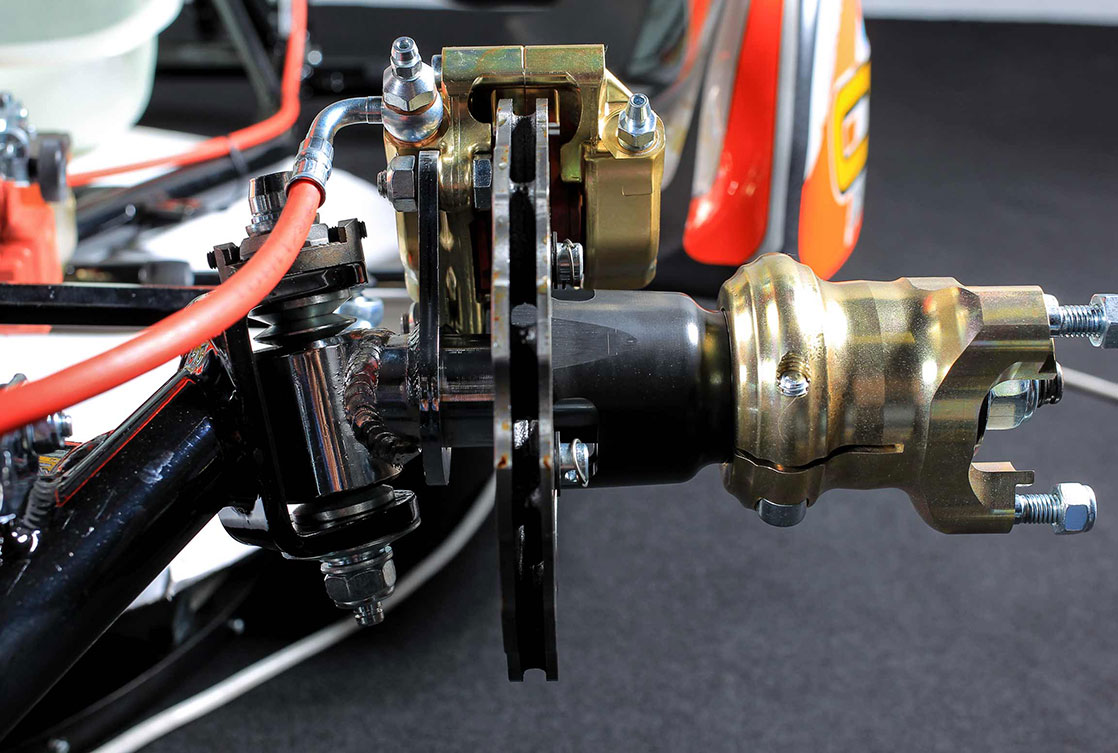 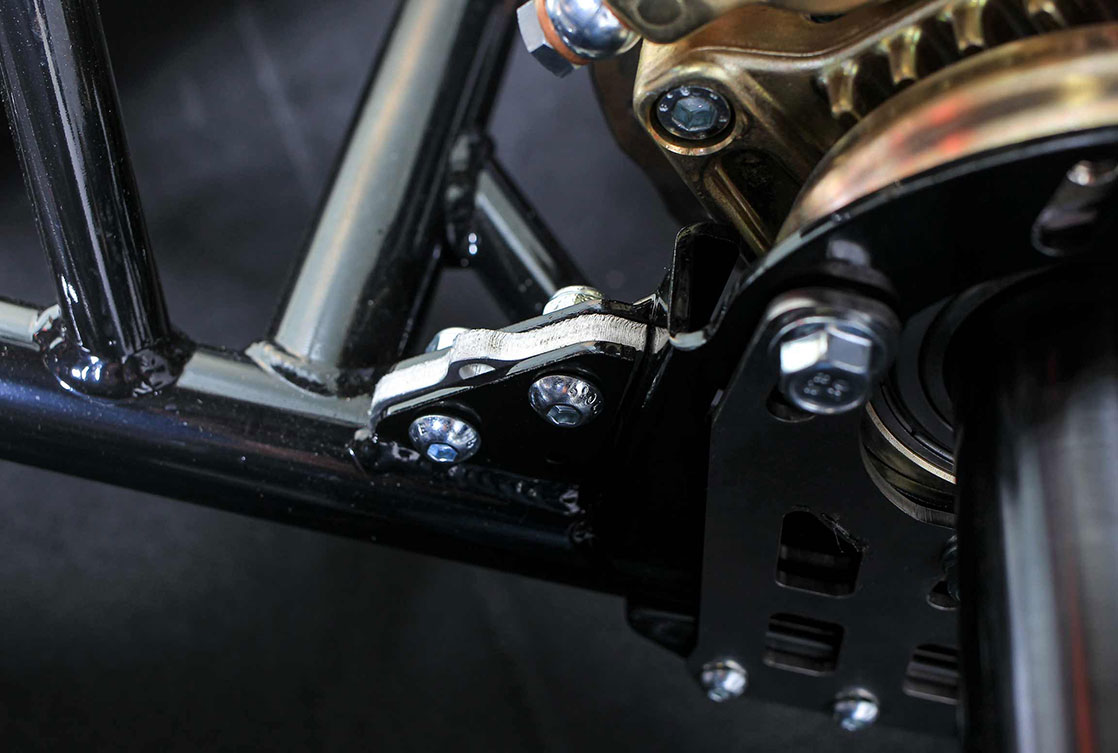 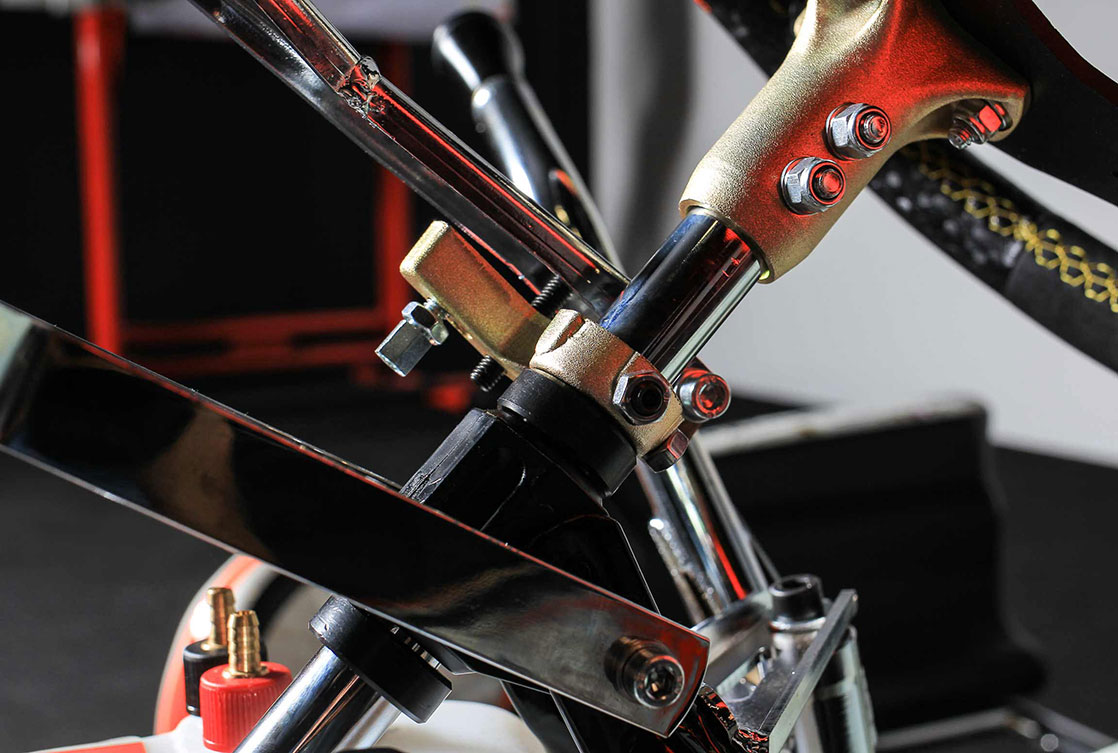 Close up of the stub axle with brake and front hub. The hub, in particular, is fruit of an innovative manufacturing process that “carves” its zone of contact with the disk in three different points. This allows for greater flexibility between the two components and frees up the rear end of the chassis - a feature that is especially important in competitive contexts, when there is a lot of grip on track from tires.

Another absolute innovation is the small metal insert designed to be added in front of the left bearing cassette, on the caliper side. When the component is inserted and locked down, the chassis becomes more rigid and has more grip while braking. Vice versa, by removing the insert, you give the rear end greater freedom of movement.

Like all Road Rebel “Gold Line” accessories, the steering wheel is also gold. thr new steering system features a rivisitation of the “RX geometry”, meaning the measures and angles that govern the interplay between the stub axles, the tie-rod, and the steering column lock plate. The goal was to make driving easier and reduce the impact of potential driving mistakes.

The biggest change, though hard to see from the oustide, regards what CRG calls “RX geometry” – meaning, the angles that define the unit formed by the stub axles, the tie-rod, and the steering column lock plate. The new solution makes for easier driving and limits the impact of mistakes, like loss of time and speed. And while it was engineered to improve customers’ driving experience, it also makes life easier for expert professionals, as CRG factory driver Felice Tiene confirmed when we asked his opinion.

The other big change that characterizes the new Road Rebel Gold Line is more visible and regards accessories, which, as the name implies, are rigorously gold in color.
The most innovative modification regards the new hubs, now featuring a chiseled surface that dips in three spots. This change in the contact zone with the disc brake yields a more fluid interplay between hub and rim, making the rear end of the kart more responsive, especially on a track with high-grip conditions. 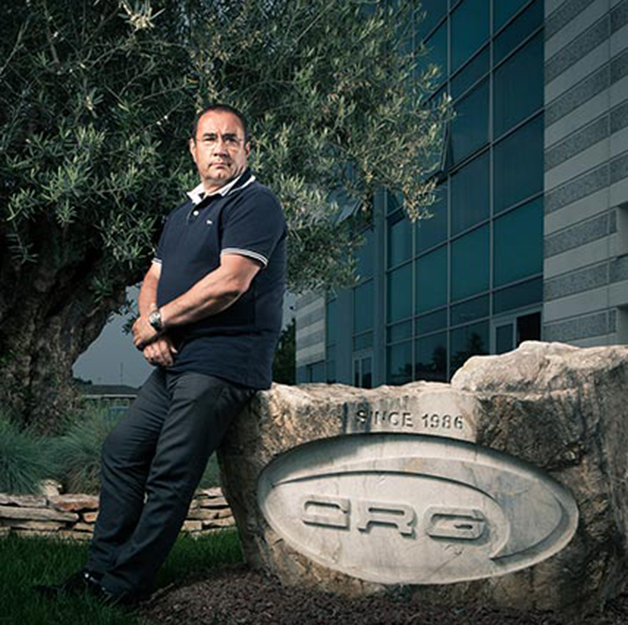 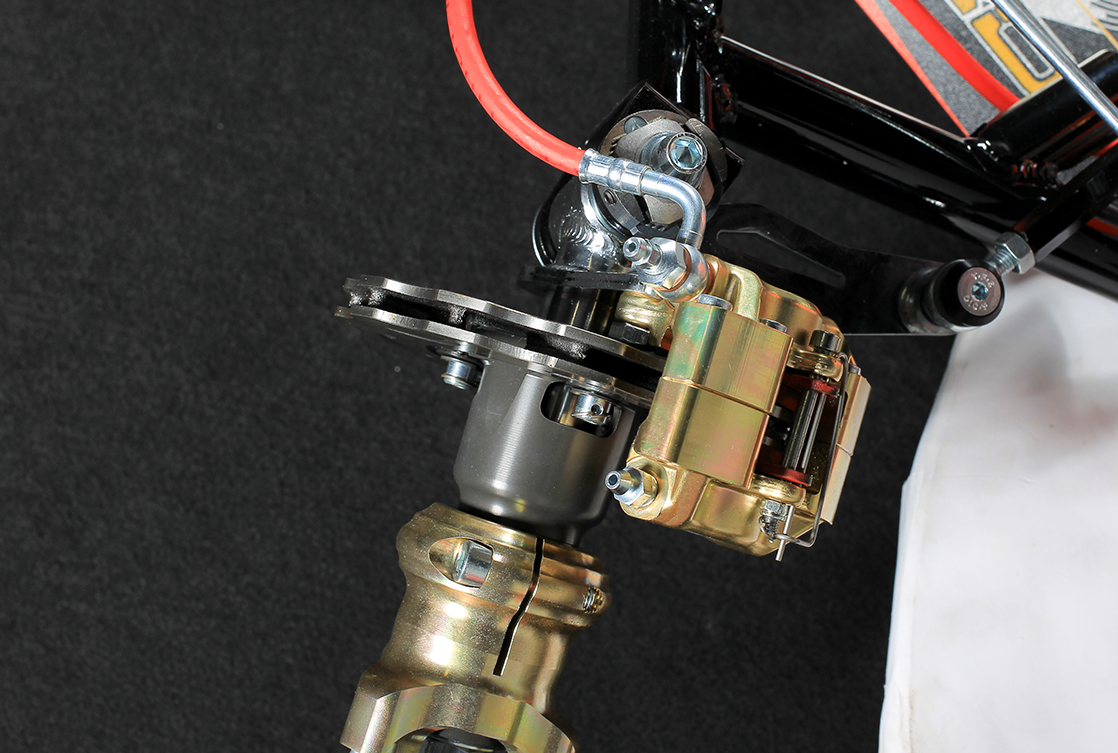 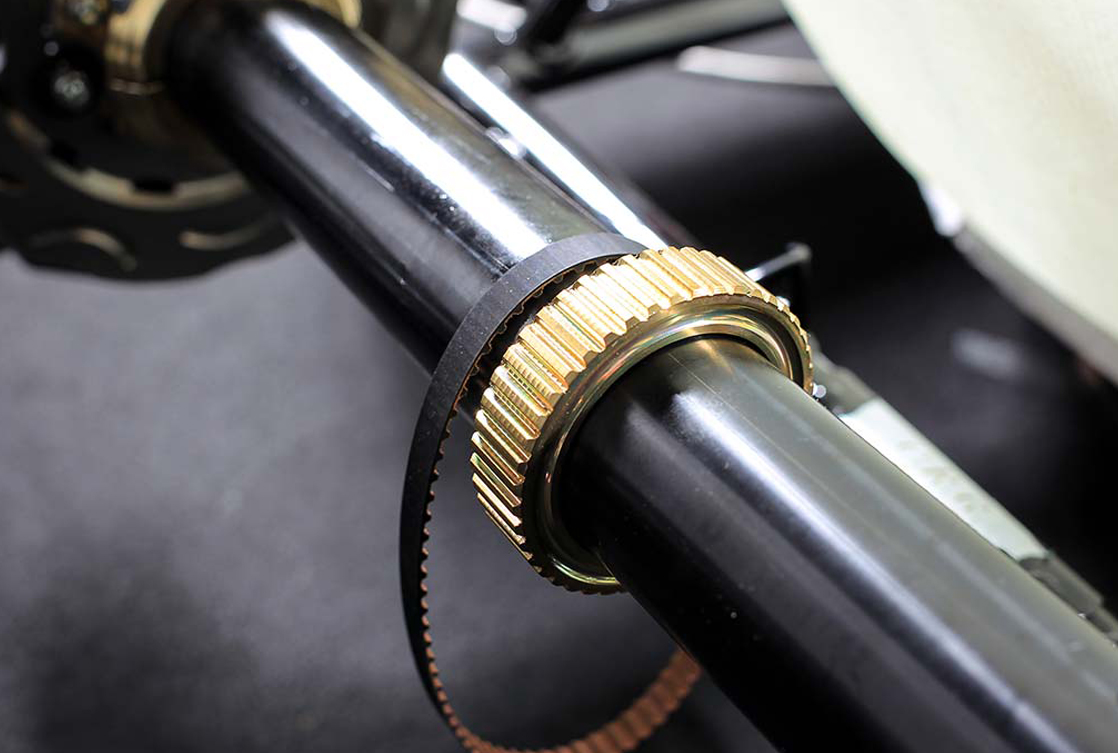 Above, a top view of the front brake caliper. Below, a detail of the pulley mounted on the axle. Of course, strictly gold like all components 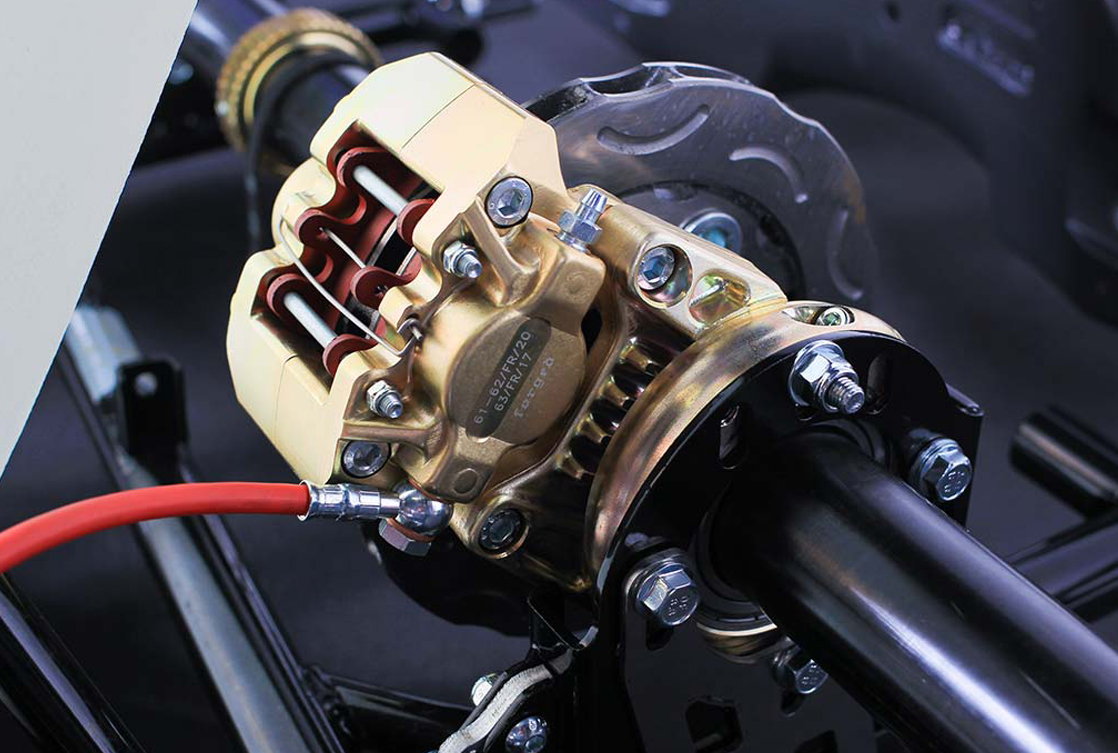 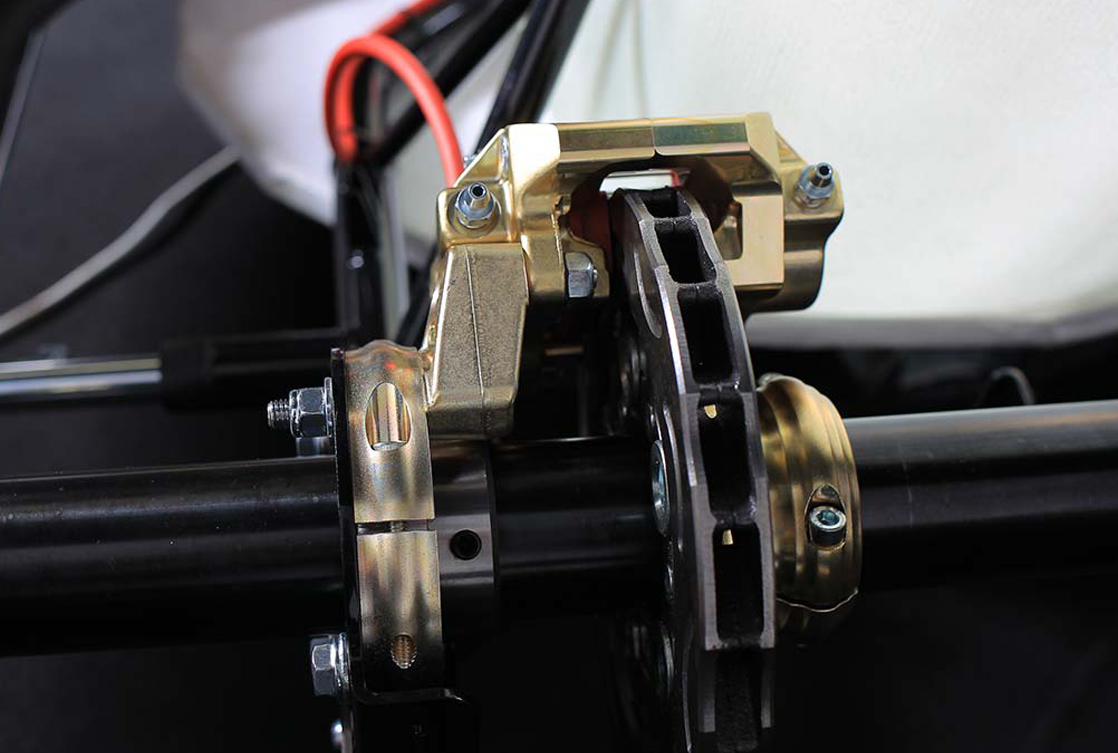 The new rear brake calipers: the modified plate with cooling extensions optimizes heat dispersion for the assembly and the brake system as a whole 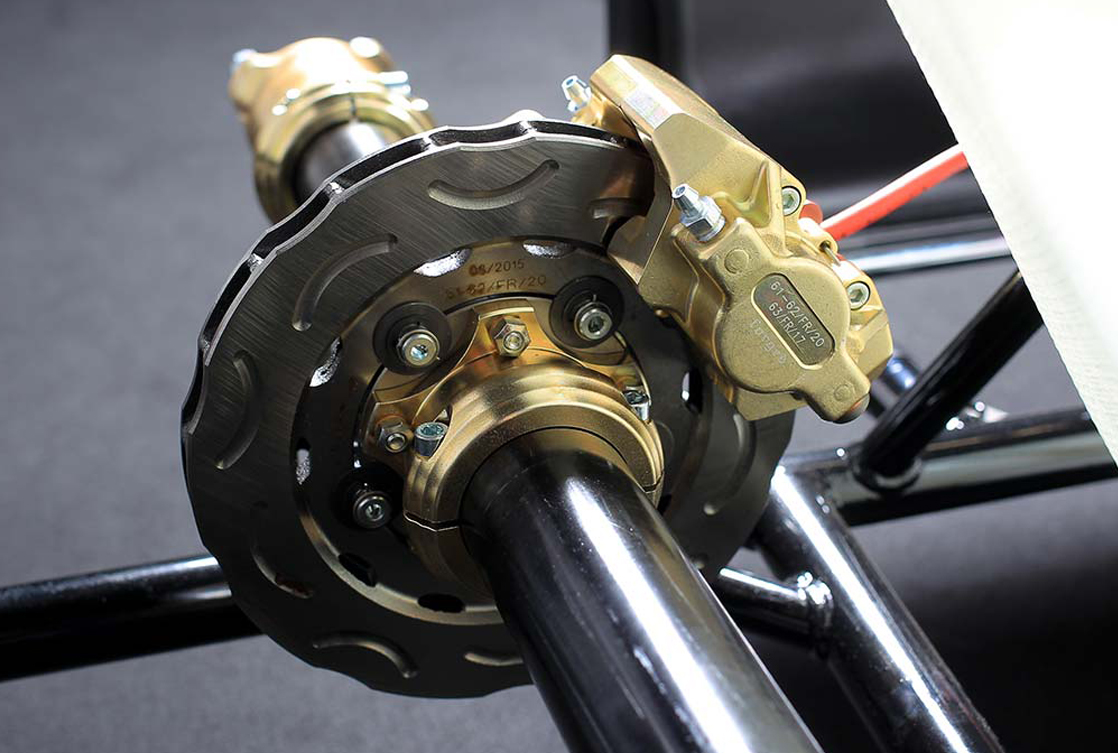 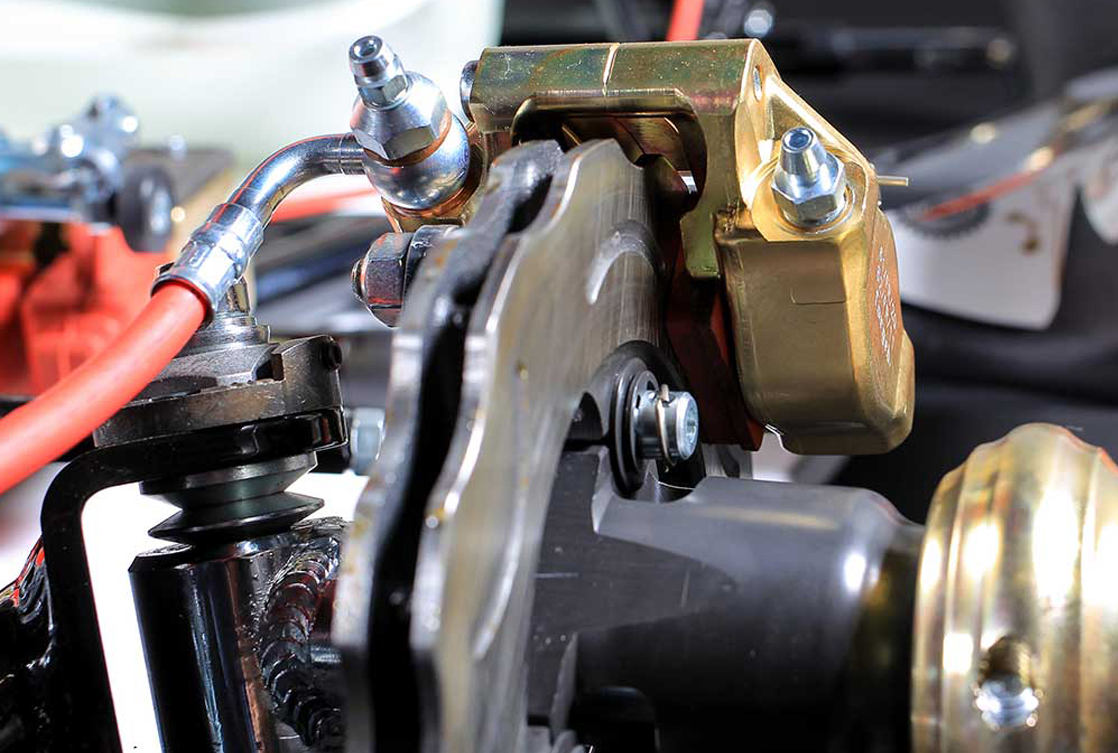 Other close-ups of the rear brake caliper and disc. The whole assembly has been enchanced in terms of heat efficiency, for more reliable performance

CRG was founded in 1986 by Calogero and Roberto Vanaria and Giancarlo Tinini, based on their shared experience in Kalì Kart. In the ’90s the company switched to industrial production and launched Maxter engines. Since 2003, Maxter and CRG are controlled by the Tinini Group holding.

They can interest you...
The Expert Advices
Paolo De Conto: when a champion says ‘enough’
First Analysis
Black Mirror, the new 60 Mini kart homologated by CRG in 2020
Tech Focus
The CRG system to adjust the kart’s wheelbase
Under Review
The return of the CRG Heron chassis - update 2020
Editorial
Jonathan Thonon: overturning, on the track, while going at full speed
Under Review
CRG Road Rebel, the chassis of champions - 2020 update
Under Review
KR2. The world champion direct drive chassis
Editorial
Giancarlo Tinini, the man who made Max Verstappen great
Under Review
DR30-S10: the updated Daniel Ricciardo chassis for direct drive karts
Under Review
KR1, the new chassis designed by Dino Chiesa for the shifter categories
First Analysis
CRG Heron Plus: the 2000 European Champion kart with Lewis Hamilton
Under Review
Mercury R - OK, the latest Kosmic development for the non-shifter categories
Special
Top kart drivers of the 80s and 90s
Under Review
RK-30. The KZ "Kubica" chassis - Updating 2019
Champion Advice
How to drive in La Conca with a KZ kart. Davide Forè explains
SUBSCRIBE or TRY FOR FREE 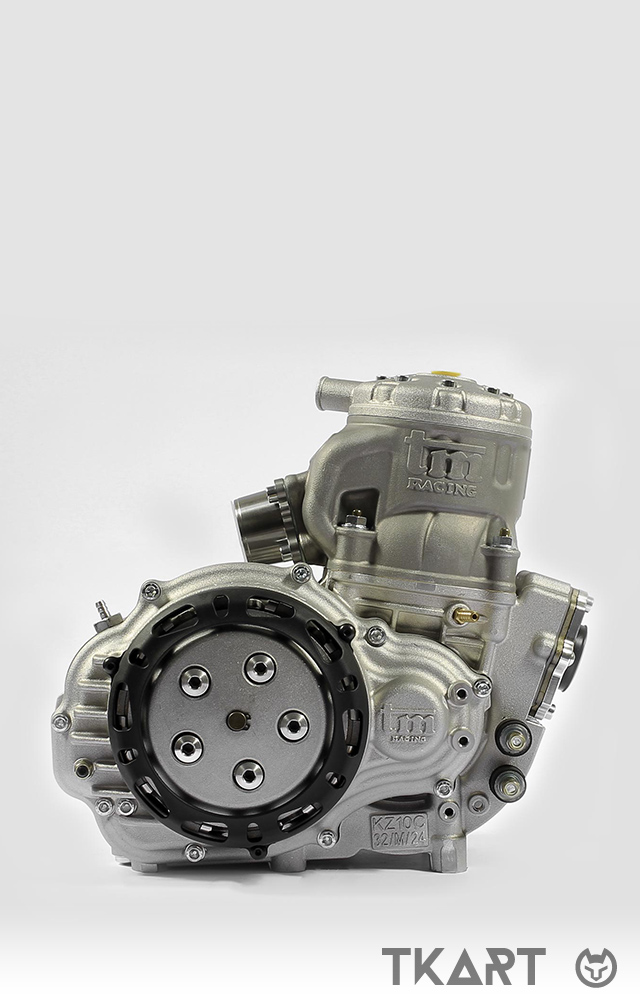 The official CRG season starts this weekend with the 1st round...

Extension of entries for the 2018 European KZ Championship