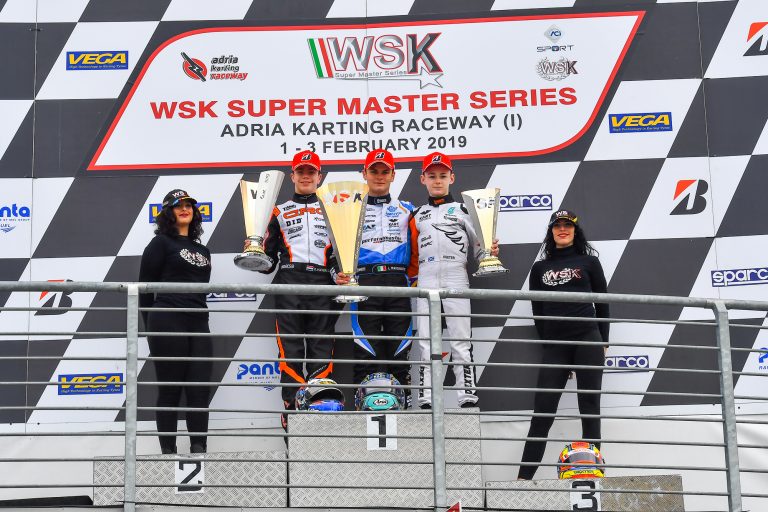 After yesterday heavy rain conditions today the Adria Karting Raceway was able to live dry races in the OK class.

In pre-final A, Dutchman Dilano Van T’Hoff from Forza Racing dominated the race over Dexter Patterson (KR Motorsport) and Gabriele Mini (Parolin Racing Kart). In pre-final B, another Dutchman Kas Haverkort from CRG Keijzer Racing dominated after a great comeback from ninth-place of the grid. Luca Griggs from Lennox Racing Team finished in a stable second position ahead of Russian David Rozenfeld from Kosmic Racing Department.

Kas Haverkort started so well from second place in the final, taking the lead at turn one and leading the field until lap 7, when it was the 2017 Junior World Champion Dexter Patterson who took the lead after a great pace.

Patterson was leading until the reigning world champion Lorenzo Travisanutto from HTP Kart Team appeared to steal the lead to the British driver. Travisanutto immediately put increased the gap over Patterson who was overtook by Kas Haverkort.

Patterson lost as well the podium position with his compatriot and Red Bull Junior driver Harry Thompson (Ricky Flynn Motorsport) who overtook Patterson and Haverkort for a second position at the checker flag.

But a post-race scrutineering dropped him to 5th position. A shame for Thompson who was the protagonist of an incredible comeback of 22 places.

The race did not went well for rookie stars Gabriele Minì (Parolin Racing Kart) and Kirill Smal (Ward Racing) who had to retire due to some crashes.

The WSK Super Master Series will be back on track in three weeks in South Garda Karting (Lonato).

Once in a Lifetime… Competing in karts on the snow

The formulas to run in the 2019 championship