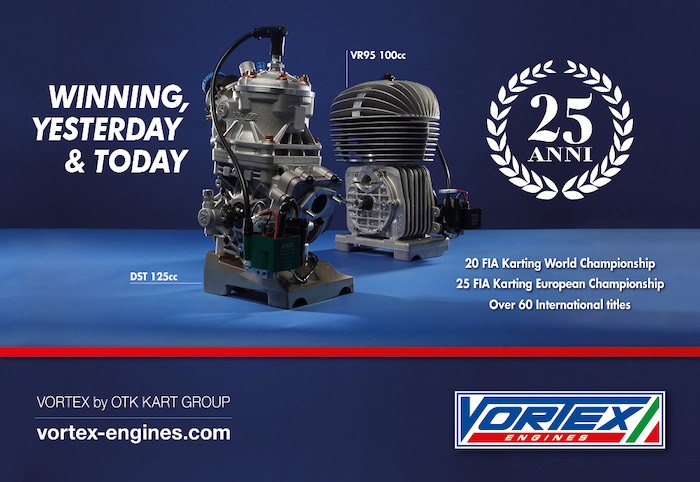 A quarter century of great karting and lots of engines. With this big satisfaction, we at Vortex want to celebrate the anniversary of our first 25 years of history as engines manufacturers for racing karts.

It is the year 1995 when a well-known reality as tuners within the karting scene decides to challenge the “giants” of international karting of the time and go beyond the simple tuning, becoming in all respects a company able to create top racing engines internally.

The first Vortex engines making their début on the track are the VA95 models, dedicated to the ICA-J and Formula A categories, and VR95, dedicated to the Formula Super A and whose letter R indicates the rotaryvalve mechanism. In 1996 we gained the first world titles, conquered by Johnny Mislijevic in FSA and by Jean Christophe Ravier in Formula A, where we celebrate the encore immediately the year after, thanks to the victory of James Courtney.

In 25 years, the international titles won are over 100, with 20 world championships, including the last one dating back to last year with the DJT engine in the OKJ category, and 25 European championships.
We won throughout the era of 100cc. air-cooled and then water-cooled engines, the increase in engine capacity to 125 cc., the abolition (and the return in 2016) of direct drive … With our engines, the drivers who wrote the history of karting such as Marco Ardigò and Davide Forè conquered lots of victories over the years, as well as rising stars of motorsport such as McLaren F1 driver Lando Norris, Logan Sargeant and Enaam Ahmed.

But the successes collected in the most prestigious competitions are only a part of Vortex’ mission, always engaged in the promotion of a karting philosophy accessible to everyone, with a careful focus on costs control, but without giving up performances and fun.
On these basis the Rok Cup project comes to life in 2003: a universe including a whole range of reliable and performant engines from the mini to the shifter and whose single-brand Rok Cup championship, organized by Vortex directly, is now well-established all over the world.

A commitment, for which we use the same latest generation technologies, the same numerical control machines and the most advanced software, as well as the same top-quality materials both in the realization of engines for professionals and those for all karting fans.
Our engines, able to give satisfaction and emotions to all drivers in all contexts, are marked by the manufacturing precision, the ease of driving, the performance and reliability: from challenges with friends on the karting tracks all over the world, to the most important events of the international calendar, when the titles writing the history of karting are offered as a prize.

All of this is what makes us proud to be Vortex. This is what we have been working hard for in our first 25 years of life. And this is what drives us to go on, with passion and devotion, for all the years to come.

Kosmic Kart in Finland for the World Championship