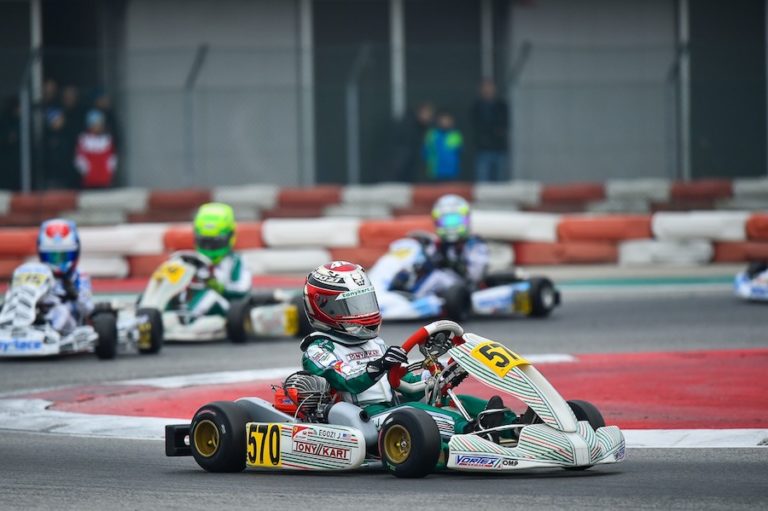 Competitions are finally restarting, and the Tony Kart Racing Team is getting ready for the double appointment of the WSK Super Master Series on the Adria Karting Raceway circuit: from June 29th to July 5th all the categories, from the MINI to the KZ, will get on track.

After more than 4 months from the last event, just before the forced stop of all the activities on the track, the Tony Kart Racing Team is now looking forward to the next race meeting at the Adria Karting Raceway and, hopefully, the gradual return to normality.

The appointments are the third and fourth round of the WSK Super Master Series, exceptionally taking place in one week only, from June 29th to July 5th. Of course, this event, where both finals of the championship will be run, will be an important test bench and we are happy to go on with a season started with great satisfaction, until the break. Tests and training of the latest few days gave us good results: both our drivers and Racer 401 R chassis powered by Vortex cannot wait to get back on track and fight for the victory.

Regarding the OK category, our main target is beginning again from where we were: our Joseph Turney and Pedro Hiltbrand are leading the Championship rating, thanks to a victory each in the first two rounds. Our trio in the Senior class is completed by Lorenzo Travisanutto who, after the excellent recovery in Final in Lonato, still has good opportunity to climb the rating.

In Adria we will line up our drivers in KZ2, coming from a good first round. Simo Puhakka was extremely fast during the previous race, while the new entry Paul Evrard is getting more and more familiar with our material.

Under our awning in Adria, also the big group of the drivers engaged in OKJ will be present, with Karol Pasiweicz trying to do his best to be the protagonist again, leading the group together with Aiden Neate, Harley Keeble and Maxim Rehm. The WSK Super Master Series will bring back to the track Eron Rexhepi, who exploited the forced break to recover from an injury which stopped him for long. With him, another new entry: the Finnish skilled driver Tuukka Taponen, winner, last year of the first round of the European Championship ending 4th in the final ranking and current champion of the OKJ Finnish Championship.

Finally, Jimmy Helias, Kai Sorensen, Andres Cardenas, James Egozi and Jules Caranta will start again fighting for the first positions in the MINI category, always at the wheel of the new Rookie 2020 with which they played a leading role during the first stage of the season.

The double appointment in Adria can be followed on all WSK Promotion social channels. The official website will supply detailed results of the qualifying and the heats, besides the live-timing of each session. Saturday and Sunday the coverage will be enriched by the live-streaming, available on Facebook too, for the Finals of both rounds and the prize-giving of the Super Master Series.