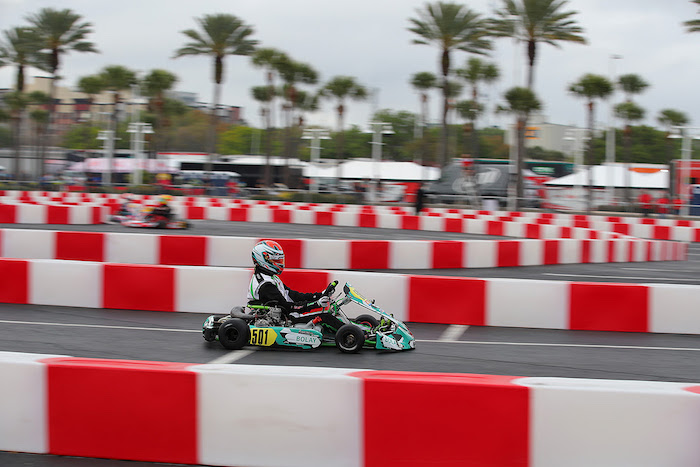 “It was a perfect time to highlight how well our chassis work since we have our March Madness Chassis Sale going on as we speak,” explained Farshad Bagheri. “Congratulations to Rene Martinelli for his third podium result in as many races as well as to Colin Warren who battled with some of the top ROK Senior drivers in the country to stand on the podium in P3.”

The largest contingent of TB Kart USA drivers came from the gearbox categories as four competitors entered ROK Shifter Master while two entered ROK Shifter. Rene Martinelli led the way in the Master Shifter category as he never ran outside the top-three all weekend long. Battling hard throughout the heat races and prefinal, Martinelli worked his way into a position to challenge for the win, ending his weekend in third. Pete Licciardi’s best result of the St. Petersburg event came in heat race two where he was able to finish in the fourth position as he drove to sixth in the prefinal, improving from his seventh-place result in the prefinal. Farshad Bagheri showed great speed on new tires during Friday’s qualifying session putting his TB Kart entry third on the time charts but first corner contact in heats one and the prefinal hurt his chances at a win. Bagheri ended his Florida Winter Tour campaign with a 14th place effort while Edgardo Ortiz Romo finished 15th.

Austin Garrison and Zachary Hollingshead improved throughout the weekend as Garrison turned his sixth-place qualifying effort into a prefinal victory on Saturday afternoon. Looking to utilize the main event pole position to his advantage, wheels spinning off the line relegated him down the running order as Garrison claimed the fifth position when the final checkered flag flew. Hollingshead had a tough go in heat one due to contact but finished heat three and the prefinal inside the top-ten. Carrying that momentum into Championship Sunday, Hollingshead put two TB Karts in the top-ten with a tenth-place result.

ROK Senior driver Colin Warren saved his best run of the Florida Winter Tour for the final on track session of the series. Qualifying 11th in ROK Senior, Warren went third, 18th and fifth in the three heat races. Sunday the young gun got his elbows up and battled with some of the country’s best to claim the third and final podium position.

Jed Perkins solidified his TB Kart in the top-five of the 206 Senior division qualifying fourth and having three heat races with top-five results. Trouble in the prefinal relegated him back to tenth, and he was unable to drive his way forward in the main event, eventually settling for a ninth-place finish. Jorge Ruiz ended his Florida Winter Tour in 12th.

Vortex Mini ROK driver Steve Miller had a good showing in St. Petersburg as he continues to gain speed and experience along the way. Progressing forward in most on track sessions, Miller was able to race himself forward from an 18th place qualifying position to a 12th place finish on Championship Sunday, his best finish of the 2020 FWT program.

With the Florida Winter Tour now complete, TB Kart USA will continue on with their March Madness Chassis Sale until the end of the month. With a guaranteed 15% off of any new chassis, customers have the opportunity to receive a 25% discount. Contact TB Kart USA for more information.

For more information on TB Kart USA, how to become a dealer or their national level race team, please contact Farshad Bagheri at 727.204.7633 or via email to FBagheri@TBKartUSA.com. TB Kart USA can also be reached online at www.TBKartUSA.com or by searching TB Kart USA on the Facebook, Instagram and Twitter social media platforms.