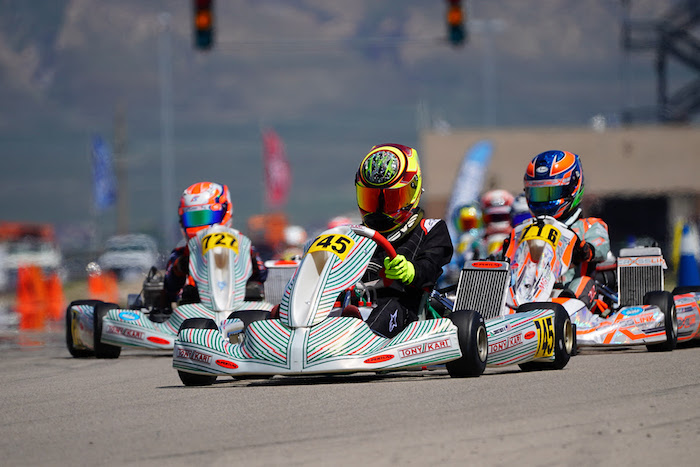 Expanding to eleven competitors for the Superkarts! USA (SKUSA) Pro Tour finale this coming weekend at New Castle Motorsports Park, Team Supertune will have a major presence in three of the series premier divisions. With five drivers set to do battle in X30 Junior, an additional five will see action in Mini Swift while one will enter the Micro Swift ranks. Taking on the ultra-fast and draft friendly track, the team will be once again aiming for the top step of the podium.

“This is the most number of drivers that we have ever run in our program, but I have experience in large programs in the past and am working hard to ensure that we are prepared heading into the weekend,” explained Cruttenden. “Our drivers are extremely talented and if we are able to work together, we have a chance to have a career weekend for the team.”

Five drivers enter the X30 Junior class as Supertune’s Freddy Slater leads the way as the championship point leader. SKUSA Great Lakes Pro Kart Challenge winner John Burke will look to carry the success from last weekend into this coming weekend while the brother duo of Cole and Carson Morgan join the Indianapolis based program. Frontrunners at both the regional and national level, the Morgans will be plugged into a winning program and have a chance to stand atop the podium blocks. The fifth and final driver in X30 Junior will be Mackenzie Cresswell as the quintet of drivers aims to end the Pro Tour strong.

In the Mini Swift category, it will be championship point leader Kai Sorensen that leads the team into Indy but three Supertune drivers sit in the top four in points and all have a chance at the championship. Enzo Deligny and Anderson Leonard enter the fray second and fourth overall, as they will be joined by the likes of Xander Reed and Lucas Szabo.

While Freddy Slater enters the X30 Junior class, younger brother Alfie Slater will carry the Supertune flag in Micro Swift. Competing in only one Pro Tour event this season, the youngest of the Slaters scored a podium result and will look for the win in New Castle.

For more information on Supertune, race team opportunities in 2019, OTK product sales, or engine and dyno services, please contact Ben Cruttenden at 317.900.3141 or via email to Ben@Supertune.us. Supertune can also be found through their social media accounts at Supertune USA.

Kosmic Kart At The Final Stage Of The European Championship

Competitiveness in Zuera for Tony Kart