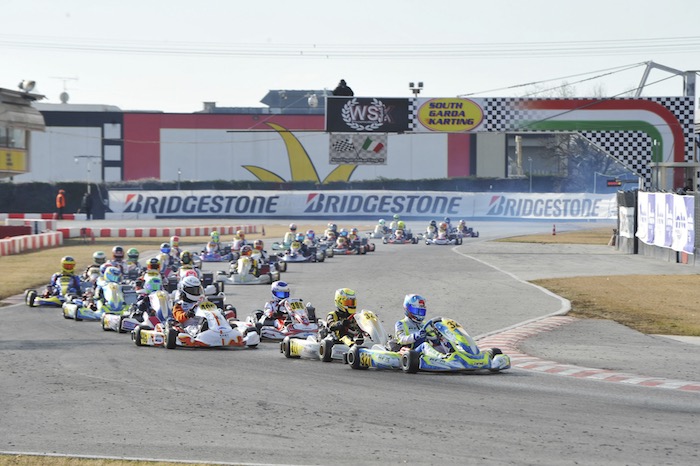 WSK is heading to La Conca, Muro Leccese.
The round of WSK Super Master Series held in Lonato (above, a view of the track during the races of last weekend) had an important effect on the classifications. OK, OK Junior and 60 Mini are at the turning point of their campaign and in two weeks time they will get again on track in Muro Leccese (Lecce, Italy) for the third round, before the closer that will take place in Sarno (I) on March 24th. KZ2 will contest its second and closing round in Sarno instead. Classifications are shaping up and the turning point is going to be crucial, as it can highlight the possible title winners. The fight is on and the increasing point-scoring scheme in the next two rounds will make it even more interesting.

Bas Lammers leading KZ2.
Team Sodikart had a positive weekend with the French Adrien Renaudin winning KZ2 Final and the classification lead going to the Dutch Bas Lammers (in the pictureabove), both on Sodikart-TM-Bridgestone. The latter had the upper hand in qualifying heats, won Prefinal A and came second behind Renaudin in the Final. Lammers is currently leading the classification at 91 points, but Renaudin chases him at 89, which can envisage for an interesting fight in the closing weekend in Sarno. The title quest will also include Marijn Kremers (BirelArt-TM), who was second in Prefinal A and third in the Final race, and now stands third in the classification at 67 points. Paolo De Conto (CRG-TM) won Prefinal B but was not happy with the fourth place in the Final and now stands three points short of Kremers. Alex Irlando (BirelArt-TM) is also resolute to improve his position, as he currently is fifth at 45 points.

New challengers for OK leader Travisanutto.
Lorenzo Travisanutto (KR-Iame-Bridgestone, above) kept the lead of the classification in OK thanks to the victory in Prefinal A and the second place in the Final. The Scot Dexter Patterson (KR-Iame) set the pace in the Final and bounced back from the little points scored in Prefinal A. The two stand respectively at 151 and 128 points, but behind them the competition is quite fierce: Dino Beganovic (Tony Kart-Vortex) has been successful in qualifying stages at South Garda Karting, won Prefinal B and came third in the Final, which allowed him to make good progress in the classification reaching P3 with 94 points. The British driver Taylor Barnard (KR-Iame) heads back home from Lonato happy for the second place in Prefinal B and the fourth in the Final, which earned him the fourth place of the provisional standings at 78 points. The Dutch Kas Haverkort (CRG-TM) slipped down to P5 instead with a total haul of 70 points.

Antonelli climbs on top of OK Junior.
OK Junior has been the most lively category of this early season and the classification of the first round held in Adria has been literally turned upside down. Andrea Kimi Antonelli (KR-Iame-Vega, above) is now leading the classification despite an unexpected drawback, caused by the the breaking of his rear bumper, during the Final at South Garda Karting. The victory in the heats and Prefinal B launched Antonelli to the top at 94 points, but the Dutch Thomas Ten Brinke (FA Kart-Vortex) is only 4 points short of him. The Brazilian Rafael Camara (BirelArt-TM) had a tough weekend and could not collect any point at all in Lonato. He, therefore, is stranded at 89 points and slipped down to the third place of the classification. Jamie Day’s (Exprit-Vortex) title chances boosted up thanks to the victory in the Final that placed him fourth in the standings at 81 points, while the Dutch Robert de Haan (Energy-TM) is fifth at 69 points.

A positive momentum for Al Dhaheri in 60 Mini.
From the United Arab Emirates to Europe to lead 60 Mini: the successful moment of Rashid Al Dhaheri (Parolin-TM, above) continued in Lonato where he claimed all the points up for grabs winning heats, Prefinal A and Final. The young Middle-East driver is leading the pack at 176 points, while the Belgian Ian Eyckmans (Parolin-TM), who ended the Final in P2, is second at 116 points. The Jamaican Alex Powell (Energy-TM) has also been shining at South Garda Karting and now is third at 85 points, the driver from Singapore Akshay Bohra (Parolin-TM) won Prefinal B and stands fourth in the standings at 71 and the Italian Andrea Filaferro (Tony Kart-TM) is fifth at 69.

Fourth and last round of the WSK Super Master Series in...

Birel ART – Kremers in the international top four in KZ2