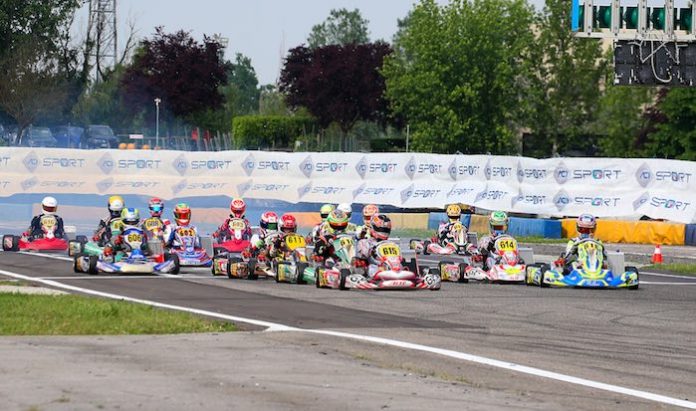 SENIOR ROK. MOLINARI AND LOCATELLI GAIN THE VICTORIES
Giorgio Molinari check out a great pole in qualifying, preceding Gaglianò by less than a penny, hounded by Locatelli, Croccolino and Mira.
In the two Saturday heats Molianri is confirmed with two successes, both obtained before Locatelli. The second row in the start of race-1, behind Molinari and Locatelli, is earned by Moncini and Mira ahead of the third row, all Tuscan, composed by Croccolino and Biagioli. Gaglianò sees himself relegated to the fourth row due to some problems in the heats. The young Bernardi completes the fourth row.
The games of race-1 are decided to start with Molinari who shoots perfectly, maintains the leadership and places two record rounds, sowing the rest of the group, led by Locatelli.
The fight for the podium is enlivened by a dazzling Croccolino, able to pass Cordera and Moncini quickly, taking Locatelli in the wake. Six laps from the end, when the confrontation between Locatelli and Croccolino is about to get underway, the cold shower arrives, with the stop of the young Tuscan who opens the road to third place in Moncini.
In the last passages Molinari administers the tires looking at Locatelli and Moncini, who follow him on the podium. Cordera is fourth thanks to a good comeback and Mira manages to hold off a Biagioli that is anything but compliant.
To frame the performance of Ortenzi, eighth after starting from the back of the grid. 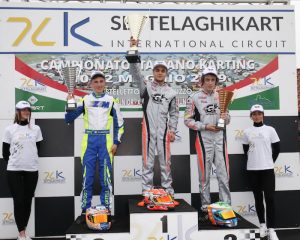 Race-2 is much more uncertain than race-1, with Ortenzi and Vecchiatini taking off from the front row and Moncini, Cordera and Locatelli moving immediately into their wake.
Cordera immediately takes the lead and Ortenzi, second, is good in the early stages of not being overwhelmed by the pressure exerted by the other Rokkers. At the fifth pass, Locatelli takes the second place, right in the moment in which the winner of race-1, Molinari, flies out and gets stuck in Biagioli.
Croccolino and Gaglianò make their way between Bernardi, Zuccante and Mira, until they reach the foot of the podium. Four laps from the end, Locatelli breaks the points and passes Cordera, who joins his rival without wasting time and goes on to take a good second place.
The third step of the podium is for Gaglianò, very good in his comeback, after the unlucky race-1. Croccolino remains off the podium and is once again the fastest on the track and one of the brightest Rokkers of the weekend.

JUNIOR ROK. RAGONE MAKES 2 OUT OF 2
The poleman Ladina fails to confirm himself in the two heats that serve to define the race-1 grid and slips into the fourth row. If Ladina falls to rise sharply in the qualifying races (Manches) is the very young De Palo, author of two successes in front of Ragone.
Colombo and Chiurato disputed positive manches and went back, earning positions close to the leaders.
The first rounds of the first final are all for Lazio’s De Palo, effective at the start and not at all intimidated by the more experienced Ragone, Ladina and Colombo.
In the middle of the race the match between De Palo and Ragone is decided in favor of the latter, who takes the lead and puts a small but precious margin between himself and the pursuer.
De Palo closes second, without ever giving up the leader, proving to have magnificently cashed the jump from the Mini Rok to the Junior. Passage occurred only a few weeks ago.
Ladina crosses the finish line in third position but must give way due to a double penalty, caused by as many infractions (irregular start and nose out).
On the podium there is a gritty Zaffarano, good at making its way in the early stages of the race between Colombo, Chiurato and Simion.
The second race of the Junior Rok is very lively and takes place in the name of balance.
The Australian Maynes Rutti and Donno take the lead but are soon reabsorbed by the rest of the group, in particular by Simion, Colombo and De Palo, with the latter taking the lead after a brief duel with Simion.
Ragone does not take long to get back up, taking the leader’s shoulders and after a brief phase of study he shoves De Palo and gains a small advantage that leads him to the second victory of the day.
De Palo confirms himself as the number one antagonist of the winner and goes up once again on the second step of the podium, ahead of Simion and Zaffarano. 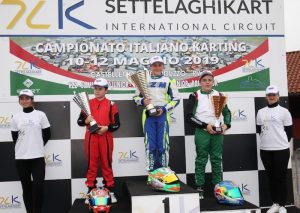 Campionato Italiano ACI ROK – Molinari and Ragone are the...