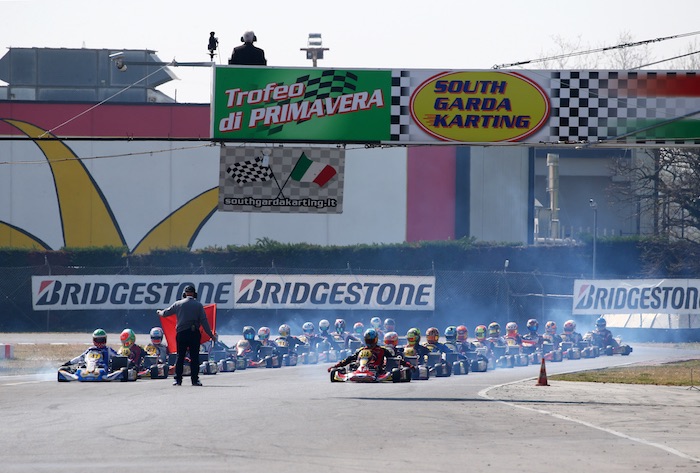 The 30th Spring Trophy ended in Lonato with a good success in terms of participation, spectacle and organization as 550 drivers enlivened this event in the two rounds that took part at the South Garda Karting Circuit.

KZ2. The 30th Spring Trophy KZ2 was won by Massimo Dante (Maranello-TM), who replied to the initial win of William Lanzeni (Vemme-TM) in round one. Dante has been the quickest since qualifying practice this time around and won the Final leading Lanzeni and Marco Tormen (Praga-TM), as the latter confirmed the third place he claimed in the first round. Dante ended equal on points with Lanzeni, but won the Trophy since he had a better time in qualifying. Tormen ended third.

KZN Under (up to 35 years). In KZN Under, Roberto Cesari (Top Kart-TM) won also the final round after claiming the victory of the first round. He still ledMarco Vannini (Maranello-TM), while the third place went to Nicolò Zin (KR-Tm) in this occasion. The victory of the Spring Trophy went to Cesari, whileVannini was second. The third place in the classification went to Matteo Dondi (Intrepid-Tm), who ended the closing round in fifth place.

KZN Over (36+ years). Riccardo Nalon (Parolin-TM) dominated KZN Over. He won both the opener and closer. Roberto Profico (Tony Kart-TM) andCristian Griggio (Maranello-TM) had an incident when fighting for the remaining places of the podium. The second position went to Marco Pagani(Parolin-TM), who proceeded Ricco Roger (Tony Kart-TM). In the Trophy, the winner Nalon is followed by Pagani, while Profico is third despite retiring from the race.

60 MINI. The Austrian Kiano Blum (Parolin-TM) won the sprint to the line in the second round after coming third in the first one. He had the best of the Dane Lauritz Sachse (Parolin-TM) and the Estonian Mark Dubnitski (BirelArt-TM) in this occasion. The Final classification of the Spring Trophy rewarded Kiano, while Emanuele Olivieri (Energy-TM) and Paolo Russo (Evokart-TM) are respectively second and third thanks to the P4 and P5 obtained in the second round.

ENTRY LEVEL. The category open to the youngest drivers has been quite lively and had a hectic finale. The victory was eventually handed to the Romanian Andrei Sutu (Parolin-Lke). The Spring Trophy was won by Giacomo Giusto (TBKart-Lke), who leads Nicolò Carrara (Tony Kart-Lke) andPietro Bagutti (Energy-Lke) in the final standings.

Categories ROK contested the opener of the Rok Cup Trophy North Area. The victory of Mini Rok went to the French Edgar Anpilogov (Parolin-Vortex), who had the upper hand on the Slovenian Mark Kastelic (IPK-Vortex) and Mattia Prescianotto (IPK-Vortex).

The Junior Rok final was dominated by Diego Stifter (Red Speed-Vortex), who was followed by Pietro Ragone (Tony Kart-Vortex) and Rocco Mazzola(Intrepid-Vortex). Senior Rok saw the victory going to Giorgio Molinari (Exprit-Vortex), while Nicolò Cuman (Tecno-Vortex) and the Pole Maciej Szyszko (KR-Vortex) followed him respectively in second and third place. Expert competed together with Senior and the victory went to Tino Donadei(Evokart-Vortex) from Piergiuseppe Di Landro (BRM-Vortex).

Complete results are available at www.southgardakarting.it

The season of Newman Motorsport is really getting going

Wave of success for Parolin at Lonato, with a double podium...

Answers to your questions on OK engines