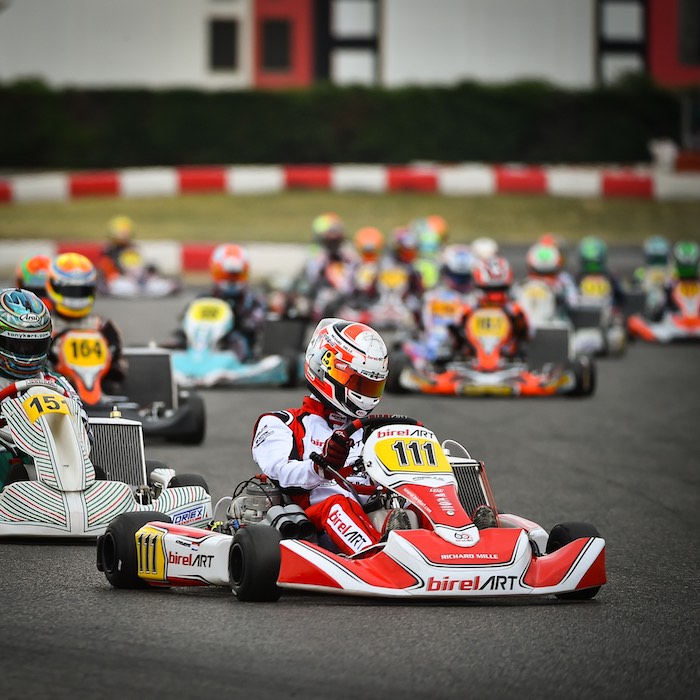 Birel ART Racing showed very convincing performance levels at the Lonato circuit in the WSK Euro Series, both in KZ2 with Marijn Kremers and Riccardo Longhi, as well as in OK with Luigi Coluccio and OK-Junior with Rafael Camara. Kremers was able to shine up until the end of the Final with a superb 2nd place that earned him a 3rd place finish in the WSK Euro Series.

The third round of the WSK Euro Series was an important event for the gearbox karts on the South Garda Karting track, where the KZ World Championship and the KZ2 International Super Cup, two world-wide FIA ​​Karting competitions, will take place. The WSK Promotion meeting took place in beautiful and increasingly warm weather with lively races where incidents tempered the ambitions of some drivers.

“We had the satisfaction of showing a very good level of competitiveness,” said Luca Filini, Team Manager of Birel ART Racing. “Our top three drivers in KZ2 were very close to the pace of the best. Kremers proved it by going back to 2nd place while Longhi and Irlando lost ground in racing incidents. We are undeniably on the right track and we will still be working hard until the world meeting in September. Coluccio saw his good progress in OK stop during a Prefinal incident, while Rafael Camara had a good performance in OK-Junior.”

Kremers on the podium and 3rd in the KZ2 standings

Marijn Kremers started strongly with the 2nd fastest time of the 80 KZ2 drivers present at Lonato. With three 2nd places and a fastest lap in the Qualifying Heats, he was making the most of the potential of his Birel ART / TM kart with Bridgestone tyres. Kremers improved again in the Prefinal and fought with great conviction to reach the second step of the Final podium by narrowing the gap with the winner in the final laps. This excellent result allowed him to make a spectacular jump from 8th to 3rd place in the final standings of the WSK Euro Series.

Also very fast since the beginning of the competition, Riccardo Longhi was fighting in 6th position of the Final when a collision dropped him to the back of the pack in the last third of the race. He still managed to finish 6th in the WSK Euro Series. Alessandro Irlando ensured two great heats before facing setbacks. However, he managed to finish in the top 10 of the Final as well as the overall classification.

Too many incidents in OK

Luigi Coluccio was one of the protagonists of the OK category. In 8th place of the 51 participants after the Qualifying Heats, he could logically anticipate a good qualification for the Final. Unfortunately, a puncture in Prefinal B caused him to progressively lose ground and he could not finish the race. Andrea Rosso was 12th in the Prefinal after Qualifying stages which were not always simple, but he was eliminated on the first lap of the Final after a contact. Nikita Artmonov qualified thanks to good consistency in the heats, but he was also forced to retire in the Final.

Good start in OK-Junior for Camara

Rafael Camara had three good Qualifying Heats in the top three after his very good 4th fastest time among more than 70 drivers. He then had some problems before being able to react in the Final and reach 12th place, while Cristian Bertuca qualified on the 12th row for the Final.

Podium in Germany, but lack of success in England