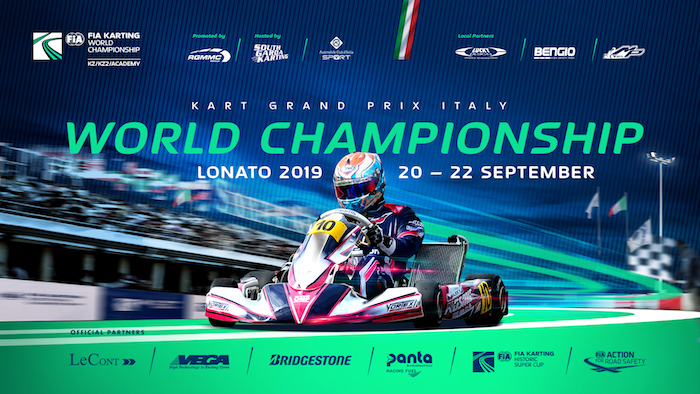 The “Kart Grand Prix Italy” is about to get underway at the South Garda Karting circuit. This is going to be the biggest event of the year and will be the FIA World Karting Championship KZ and the International Super Cup KZ2, in a joint event with the Academy Trophy for the emerging youngsters and the Historic Super Cup with historic karts exhibitions featuring karts of 60s to 90s.

A total of 261 drivers coming from 52 countries are present in this big event. The most important and successful International drivers will be in Lonato as the main constructors and teams.

A LOT OF CHAMPIONS AT THE START IN KZ

The highest category, KZ, counts 48 drivers coming from 21 different Nations and a lot of champions among these, as the drivers that recently won the world title like the two-times World Champion Paolo De Conto on CRG, who secured the KZ title in 2016 and 2017, Marco Ardigò on Tony Kart, who is likely to be at his last participation after winning it 3 times back in 2007 and 2008 in KF1 and in 2014 in KZ, the multiple-times Champion Davide Forè, who will have another go at the title on Intrepid after winning it in 1998 and 2000 in FSA and then in 2004 and 2006 in FA, Jorrit Pex on KR who claimed the World title in 2015 and Pedro Hiltbrand on CRG who was crowned OK World Champion in 2016. A lot of strong drivers will challenge them starting from the Super Cup KZ2 2017 Champion Alex Irlando on BirelArt, the winner of the European Championship Adrien Renaudin on Sodikart, the European Champion Fabian Federer on Maranello Kart, Lorenzo Camplese on Tony Kart, Jeremy Iglesias on Formula K, Riccardo Longhi on BirelArt who will be at his debut in KZ, Francesco Celenta on Praga, Simo Puhakka on Tony Kart, Mirko Torsellini on KR, and Sodikart’s Anthony Abbasse and Bas Lammers, the European Champion Rick Dreezen on KR and the winner of the 2018 Super Cup KZ2 Matteo Viganò on Tony Kart. A lot of excellent drivers are gearing up to produce a great spectacle in this edition of the World Championship.

The entry list of KZ2 is also high-quality. A total of 126 will gather in Lonato from 28 different Countries aiming to secure the title of this FIA Karting Championship. The main contenders are the new European KZ2 Champion Emil Skaras on Energy Corse and Emilien Denner on Sodikart and his teammate Paolo Besancenez. They will be joined by several Italian drivers like Simone Cunati on CRG, Giuseppe Palomba on BirelArt and Francesco Iacovacci on Maranello Kart, that have been the three main protagonists of the Italian ACI Karting Championship and closed the season in this order. Among the underdogs, Paolo Ippolito will be at the debut on CRG, the always quick Giacomo Pollini on Formula K, William Lanzeni on CKR, 2013 Junior Champion Alessio Lorandi on Parolin and a lot more drivers that will try to come to the fore to take the win.

51 DRIVERS AT THE THIRD ROUND OF THE ACADEMY TROPHY

A total of 51 drivers from 46 Nations will get on track to contest the third and closing round of the Academy Trophy. This race is going to be crucial to name the winner of the title reserved to the emerging youngsters of this category. The Academy Trophy, that reached this year its 10th edition, is a single-make International FIA Karting series ran in three rounds where the 12 to 14 years old drivers chosen worldwide by the corresponding ASNs challenge each other on par in terms of technical package that benefits from the support of OTK Kart Group for the Exprit chassis, Vortex engines, Bridgestone tyres and OMP clothing.

The 2019 classification after the first two rounds in Wackersdorf (D) and Sarno (I):

Among the karts that will make it to the track at the South Garda Karting in Lonato, the first winner of an international event: the McCulloch that dominated the scene from 1959 to 1961. Regarding the makes, all the historic brands will be present like Italkart, Tony Kart, the Tecno-Parilla winner of the World Championships from 1964 to 1966 with Guido Sala and Susanna Raganelli, the 1968 World Champion Robardie with Thomas Nillson and in 1969 and 1970 with François Goldstein, the Birel 1973 World Champion with Terry Fullerton and 1974 with Riccardo Patrese, 1975 World Champion BM again with François Goldstein and 1976 and 1977 with Felice Rovelli, the Swiss Hutless that won the World Championship with Peter De Bruyn in 1980, the Kalì Kart World Champion in 1984 with Joern Haase and Gabriele Tarquini and in 1985 with Mike Wilson and Piermario Cantoni, and the DAP that was World Champion in 1987 with Alessandro Piccini and that was also used by Ayrton Senna and many more rare karts.

The new web site of the TCR DSG Endurance is on...

Great performances at the first round of the FIA Karting European...