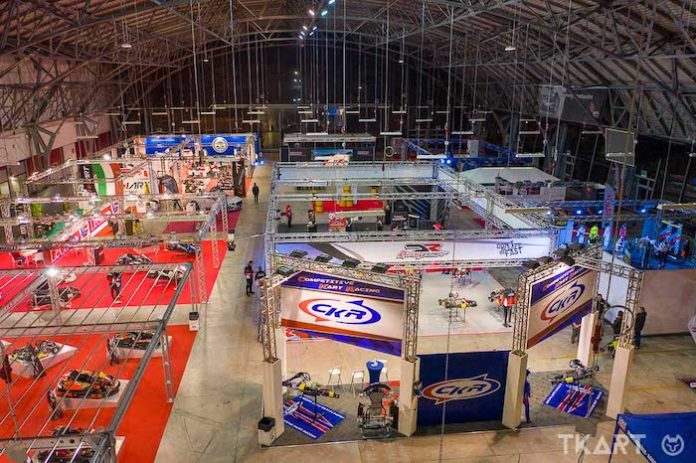 The second edition of the Adria Karting Expo is now in the books and the feedback was excellent: the exhibition dedicated to the world of karting, born from an idea by Danilo Rossi, was joined by many of the most famous karting players at international level. The event, which lasted three days (one more than the first edition), took place in the multi-functional Adria International Raceway complex.

After arousing great curiosity in the first edition of 2018, this year the event recorded a significant increase in visitors, thanks to the promotion that led over 700 people to register in the days preceding the event to obtain the VIP Pass to be shown at entrance.

In addition to the actual exhibition, the numerous activities planned for the weekend were also a source of attraction, all aimed at giving enthusiasts a taste as much as possible of the karting world.
The Arena, for example, hosted test sessions on rental karts, with experiences specifically tailored for kids, while the Adria Karting Raceway, host of international competitions WSK and CIK-FIA, saw the most savvy enthusiasts aboard kart racing made available by the partners.More specifically, Easykart offered the opportunity to try out the new KZ Junior, while Rotax Italia brought its Rotax Mini, Rotax Junior, Rotax MAX and Rotax DD2 engines to the track.

The core of the event was, in any case, the exhibition pavilion where the most important players in international karting showed off all their novelties.

The main protagonists and true leitmotif of the 2019 edition of the Adria Karting Expo were the new 60 Mini karts, presented by the Companies in view of the first single CIK-FIA homologation for this type of vehicle in force since 2020. Many manufacturers took up the challenge, to the delight of the visitors who were able to admire up-to-date (and preview) vehicles now technologically advanced.

Among the companies, there were also many that targeted karting operators, such as Go Track Barriers, Pixel Motorsport, SMS Timing and Tecpro Barriers. Enriching the scenery and offering an exceptional glance was the area dedicated to historic karts, which brought together an extremely varied selection of vehicles, some of which date back to the era in which the kart began to be regulated.

The new world champion KZ has not shaken off the burden of exhibiting the CRY30 S10 with which Marijn Kremers crossed the finish line first in Lonato. At the BirelART stand, however, there is also much more: a new Easykart category, the new brand created in collaboration with Charles Leclerc, the new S11 models, the Mini 2020 and many new features also in the Rental range.

With a large stand, CRG gave space to all the product lines: racing, with the new Mini, Rental, with the Centurion range and the important news regarding the E-drenaline and promotional electric model, which materializes in CRG FS4 for Briggs and Stratton. CRG also took the opportunity to give a gift to its fans: the Lonato company chose to bring the KF European kart with Max Verstappen to the fair

A lot to see also at the Danilo Rossi stand, among the updates throughout the DR brand with the new homologated Mini, the Modena Engines engines and the commitment in Formula4 and Formula Regional. To the delight of the most nostalgic was also present the CRG with which Danilo won the 1997 World Championship in Salbris.

IPK confirms itself as a real hotbed of novelty. The manufacturer, present with the brands Prague, Formula K and OK1, has made several updates to its chassis components such as pedals, bearings, engine stops, as well as new graphics for Formula K and Prague, with the new logo that from now on then he will identify the brand. Even for IPK it was impossible not to present the new 60 Mini: let’s see it together with Francesco Celenta.

The now famous hand-made radiators and accessories such as the crown guard and the carbon cylinder cover need no introduction. The real novelty that New Line unveiled at the Adria fair, however, was the new 2020 radiant mass.
In the New Line stand, space was also given to EM Technology branded products.

At the top of international competitions with Gabriele Minì and James Wharton, Parolin Racing kart was present at Adria with its rental and racing frames. The manufacturer that is dominating the category could not be missing the new Mini 2020, now equipped with the same Eurostar Dynamica fairings as the bigger “brothers”.

Among the protagonists of the Adria Karting Expo there is also Rotax, one of the main players in karting worldwide, who made its engines available to anyone who wanted to test them on the Adria Karting Raceway track.

The range of the historic tire manufacturer is constantly updated: durability, reliability and performance far beyond the parameters required by the Federation, both on dry and wet surfaces, with an eye also to aesthetics thanks to a now much larger logo. Vega also presented a preview of the solutions developed for the tires of the newly created Mini 2020 category regulated internationally by the FIA.

Together with Tommaso Stefanello, owner of AMV, we see all the novelties of the brand famous for its wheels, which continue to gather various successes all over the world.

In the futuristic WSK hospitality, located at the entrance of the fair, the enthusiasts were able to know all the details of the 2020 season, in which the Italian promoter, as for several years now, will not be engaged only in the kart (the race 2020 calendar was recently announced) but also in single-seaters with the Italian F.4 Championship powered by Abarth and the second season of the Formula Regional European Championship, represented, at Adria, by Tatuus T.318 by Igor Fraga, third in the championship this year with the DR Formula team.

ALSO AT THE ADRIA KARTING EXPO

Confirmed the presence of the Veneto producer CKR, always very active on the competition fields and returning from an excellent world championship in Lonato. Always the protagonist of the classes with the gearbox, the brand has recently re-launched its single-speed efforts in the X30 categories.

Gian Paolo Masotto tells us about the latest news from EKS and 0039, the brand dedicated to components and accessories. Also on display is a Superkart project and the new Mini chassis, with KG fairings and the new Italfreno system, equipped with a particular pump driven directly by the rod connected to the pedal.

Even the brand founded by Jorn Haase proposes a 60 Mini with attractive graphics. In the stand, hidden behind the products of the Corsa Racing and Runner brands, there is also a real gem: the world champion kart with Gianniberti in 1993.

As always, the goal of the technical clothing manufacturer MiR is to try to meet every kind of need with regards to comfort, while remaining at the forefront of safety.

Fiberglass, Fibergray, Carbon and the now highly appreciated Modulate: Nek Racing Seats, one of the most interesting accessories manufacturers, showcased visitors all its range of products that appeal to both the beginner and the professional. Each of the four lines is offered in the Standard, Hard and Hard + versions, the latter featuring a “belt” made of patented material that runs along the contours of the seat

Radiators, curtains, pipes, fittings and pumps: at the AF Radiators stand there was everything needed for the cooling system.

One of the most important manufacturers of lap-timers and data loggers was present at the fair to illustrate the advantages of its flagship product: the Alfano 6 2T

The karting graphic specialist could only wink at the spectacular hulls of the new 60 Mini 2020s.

Joakim Ward, team manager of the Ward Racing team, always engaged in the WSK and CIK-FIA international races, illustrates the philosophy behind his new project, this time, however, in the rental field: Caroli Kart.

We could not miss Gatel, a reference point when it comes to structures designed for race weekends and used by the most prestigious racing teams.

One of the most interesting alternatives regarding the 4-stroke kart engine. Two engines are available: the Automatic, in the Junior and Senior versions, and the four-speed Shifter. This last model also gives life to the Rookie for Shifter Class, a category that is part of the Dutch championship in which the youngest can start to try their hand at karting with the gearbox

Jesolo, in addition to its frames, also highlighted the program Karting Operazione Trionfo

The exhaust manufacturer brings a touch of color with the line of customizable terminals that support the products conceived for performance .

The team engaged in the GT classes, already collaborator with Nicola Larini and with Jacques Villeneuve in the EuroNASCAR, launches into a new project aimed at the very young drivers who want to start taking their first steps in karting, using the support of DR Racing and with a program that also includes WSK races.

The German manufacturer Rexon motors has exhibited its two “Prima Ballerina” engines dedicated to the OK and OKJ classes. The strong side of the two engines is the presence of two balancing shafts, guaranteeing vibrations reduced to the minimum, with a gear-driven transmission mechanism inserted in a crankcase machined from solid.

Lots of technology at the service kart drivers even on the Unipro stand, with the Unigo 7006 data logger, Unistop stop-watch and pressure gauges. Unit with infrared temperature sensor 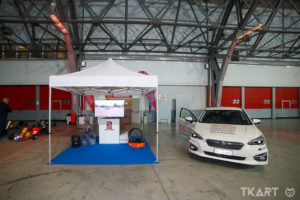 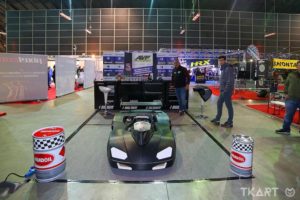 The Double Footer solution is aimed at rental kart operators: through a specially made ECU, the software cuts the power as soon as it senses that the brake and gas pedal are pressed at the same time. This prevents premature wear of components and also helps users improve their driving. 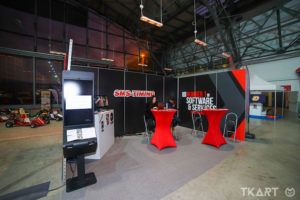 Easykart – try the new KZ Junior at the Adria Karting...