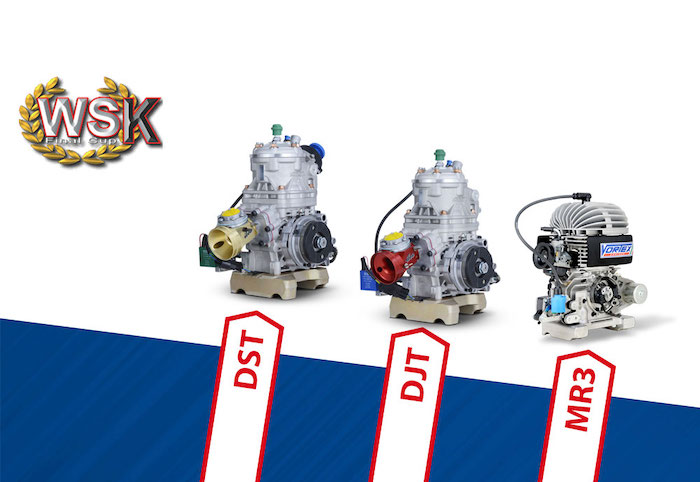 OK
The Vortex engines are great protagonists in the weekend of the WSK Final Cup at the Adria Karting Raceway conquering all three steps of the final podium. The drivers succeeding in this are, in this order, Pedro Hiltbrand, Joseph Turney and Lorenzo Travisanutto, all of them Tony Kart Racing Team drivers and, of course, all three powered by the DST Vortex engine. Pedro Hiltbrand, especially, performs a real masterpiece by recovering from the tenth position and signing the best lap too. Besides the Final, our engines stand out since the beginning of the weekend with the conquest of the pole position by Travisanutto, who continues his pace winning two heats and the prefinal and centring four best laps.
Vortex monopolizes the first three positions in the qualifying heats also in this case: behind Travisanutto, actually, Joseph Turneygains two heats and a second place in prefinal, and Jopsep Maria Martì, also ended second in prefinal.
Relying on the OTK Kart Group’s engines, other drivers stand out brilliantly: Thomas Ten Brinke (Ricky Flynn Motorsport), fourth in Final after recovering 5 positions, and Kirill Smal (Ward Racing), who before getting the ninth place of the decisive race, conquers two second places in the heats and two best laps. Excellent comeback also for Laurens Van Hoepen (Ricky Flynn Motorsport), who makes the most of the Vortex DST engine to overtake 12 opponents and complete the top ten in the Final.
Very good performance for Danny Carenini (Autoeuropeo Motorsport), Luigi Coluccio (Kosmic Kart Racing Department) and Norton Andreasson (Ward Racing), all playing a leading role in a fantastic weekend, where, out of 19 Vortex registered engines, 16 of them reach the final.

OKJ
Also in the Junior category, the pole position is signed by a driver powered by Vortex: Nikita Bedrin (Tony Kart Racing Team), who after this brilliant performance, continues his race with a victory, a best lap and a second place in the heats, a second place in prefinal and, finally, another second place obtained in the decisive race.
Just outside the podium, instead, is Ugo Ugochukwu (Ricky Flynn Motorsport), always among the first also in the heats where he gathers a second and two third places. Right behind him, ending fifth, is Artem Severiukhin (Ward Racing), author of an amazing 7 position-comeback, performed after centring two best laps in the heats.
Two best laps like those signed by his teammate William Siverholm, who, successively, recovers an unlucky prefinal with an incredible comeback of 15 positions in Final.
Finally, among the drivers pushed by our engine and firmly in top ten in the heats, we find also Miron Pingasov and Alexander Gubenko (Kosmic Kart Racing Department), Conrad Laursen (Ricky Flynn Motorsport) and Kacper Sztuka (Speedkart).

60 MINI
The Mini MR3 engines prove to be among the fastest and reliable of the whole youngest category: Jules Caranta (Tony Kart Racing Team) after the fifth place in the Qualifying, gets a second place in the heats and recovers until the seventh position in prefinal. His teammate James Egozi is the author of the eighth place in Qualifying, while Jimmy Helias, Tony Kart Racing Team, is the best in the Final among the drivers powered by Vortex thanks to an eight-position comeback.