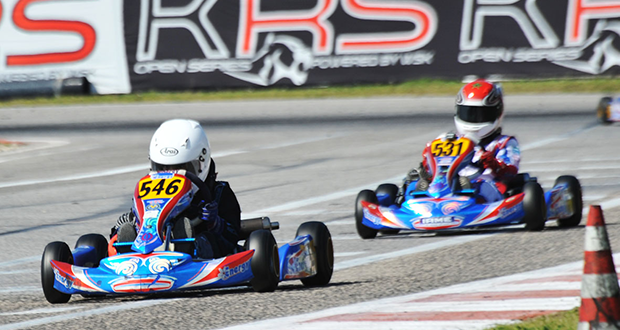 AFTER THE SECOND ROUND OF SARNO OF THE WSK SUPER MASTER SERIES ARDIGÒ (I – TONY KART-VORTEX KZ), POLLINI (I – CRG-TM KZ2), HILTBRAND (E – CRG-PARILLA OK), SHVETSOV (RUS – TONY KART-VORTEX OKJ) AND MINÌ (I – ENERGY-TM 60MINI) LEAD THE STANDINGS.
ON 3RD APRIL THE THIRD ROUND IN MURO LECCESE (I).

[dropcap]T[/dropcap]HE RACE FOR THE WSK STANDINGS.
After the first two rounds in Castelletto and Sarno, the WSK Super Master Series is approaching its third event in Muro Leccese. All is ready for the race of 3rd April at La Conca, before the grand finale of Adria on 22nd May.
KZ – THE LEADER IS ARDIGÒ.
Thanks to his victory in KZ in Sarno, Marco Ardigò (Tony Kart-Vortex-Vega) took over the head of the standings, beating by only two points Anthony Abbasse (Sodi-TM) into second position. Behind them, Paolo De Conto (CRG-Maxter) and Bas Lammers (Sodi-TM) are waiting for the event in La Conca
KZ2 – POLLINI TAKES OVER LEADERSHIP.
Giacomo Pollini (CRG-TM-Vega) believes in his potential: thanks to his victory in KZ2 in Sarno he overtook Stan Pex (CRG-Vortex) in the standings and now he is the new leader with an advantage of 38 points. Alex Irlando (Energy-TM)

[one_half_last]
thanks to his consistency, is in third position.
OK – HILTBRAND LEADS THE STANDINGS.
Pedro Hiltbrand (CRG-Parilla-Vega) scored another podium position and keeps the leadership. Nicklas Nielsen now trails by 24 points, with Lorenzo Travisanutto (both on Tony-Vortex), now in third position, who definitely joined the battle for the final victory after his success in Sarno.
OKJ – SHVETSOV IS THE NEW LEADER.
The OKJ standings turned upside down after Ivan Shvetsov’s (Tony-Vortex-Vega) victory: he is the new leader, 3 points ahead of David Vidales (Energy-TM). Sami Taoufik (FA-Vortex) lost the leadership dropping back to third position.
60 MINI – MINÌ FIRST.
Gabriele Minì (Energy-TM-Vega) dominated the 60 Mini in Sarno and grabbed the leadership. Francesco Pizzi (Energy-Iame) trails by 5 points while, after scoring a podium position last weekend, Leonardo Bizzotto (CRG-TM) is now third.
[/one_half_last]