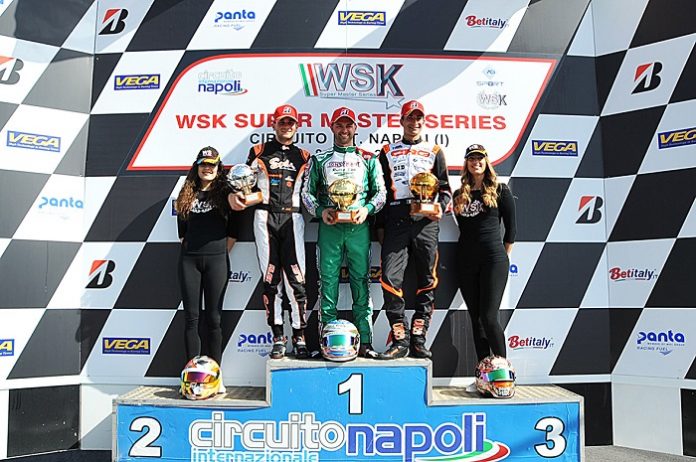 Podium party at the WSK finish line.
Last Sunday another edition, number 9, of the WSK Super Master Series ended: the Naples International Circuit of Sarno (SA) hosted the thirtieth race that took this title, in the history of the 13 seasons of WSK Promotion . The organization of Maglie (LE), committed since 2006 in International Karting, has celebrated on the podium its prominent drivers, emerged in this season at the end of the four appointments on the calendar. The kings of the categories KZ2, OK, OK Junior and 60 Mini have finally been able to hold in their hands the classic WSK globe, the trophy delivered to the first three classified in the final ranking.

Unexpected triumph for Marco Ardigò in KZ2.
Perhaps not even himself, the Brescian Marco Ardigò (Tony Kart-Vortex-Bridgestone), expected to return so quickly to the victory of a WSK Series. Beginning in the season started at the Muro Leccese stage, Ardigò proved to be first effective (second place conquered in Puglia) and immediately after winning, going to success in the first of two appointments in Sarno. Two counts on the ballot of the standings, and here is the surprise of being in full swing for the final victory, promptly arrived at the final appointment on Sunday. The KZ2 has been more exciting than ever, presenting at the start of the season the young and winning Alex Irlando (Sodi Kart-TM) at the top of the standings, then overtaken by the most experienced Treviso player Paolo De Conto (CRG-TM), jumped in the lead after having won at the La Conca World Circuit. In a final anthology, the ranking was in dance between the three until the last race, which behind Ardigò was ranked in the order Irlando and De Conto (pictured above, the podium KZ2). Equally good, behind them, the Czech Patrik Hajek (Kosmic-Vortex) and the Finnish Simo Puhakka (Tony Kart-Vortex).

The German Hannes Janker (KR-Parilla-Bridgestone) took off from the hare, a surprise leader in the OK class since the start of Adria, at the beginning of February, before being ousted by the Danish Nicklas Nielsen (Tony Kart-Vortex) at the before the two stages of Sarno. A great performance over the last weekend was what Janker needed to finally return to the lead: this is what the German did, winning everything until the triumph last Sunday in the Final. Nielsen, second but a little disappointed, still earned a good result, followed by third place in the English positive Jonny Edgar (Exprit-TM). Excellent final for the Swedish Noah Milell (Tony Kart-Vortex), climbed to fourth place, while the Spaniard Pedro Hiltbrand (CRG-TM) confirmed a positive fifth position.

On the woolen thread Minì triumphs in OK Junior.

The surprise of the year in OK Junior is the Palermo Gabriele Minì (Parolin-Parilla-Vega), from the start of the season to the attack of the Russian Kirill Smal (Tony Kart-Vortex) at the top of the standings. Disastrous for Smal last weekend, until the withdrawal at the start of the Final. But the Russian had resoundingly lost the leadership after the outcome of the Pre-Final, which in an exhilarating head-to-head had already led to the Minì command. Finally, a final 5th place in the Final was enough to triumph in the standings, in front of the equally effective Brazilian Gabriel Bortoleto (CRG-TM), who is also constantly competitive in the season. Final in growth for the Estonian Paul Aron FA (Kart-Vortex), that the victory in the Final in Sarno has projected to third place in the standings. Behind Smal, fourth, with an excellent final performance, the British Taylor Barnard (KR-Parilla) concluded 5.

Martinius Stenshorne (Parolin-TM-Vega) finally managed to keep the lead in the 60 Mini standings up to the end, during the 4 WSK trials. At the top of the rankings since the first stage of Adria, the promising young Norwegian has been caught up by fearsome opponents, such as the Bolognese Andrea Antonelli (Energy-TM) or the Polish Tymoteusz Kucharczyk (Parolin-TM). The two exchanged between them the second position in the standings, but without being able to overtake Stenshorne, which with the final victory in the Final on Sunday was successful. Polish Karol Pasiewicz (Energy-TM) defended well among the leaders, who finished fourth, followed by Swedish Joel Bergstrom (IP Karting-TM), a good fifth.