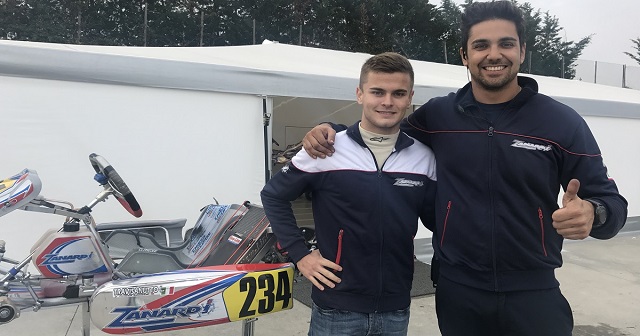 TRAVISANUTTO AGAINST ALL ODDS IN OK.
In the OK, as well as in the Junior, there were significative surprises in the intermediate standings: the Italian Lorenzo Travisanutto (Zanardi-Parilla-Bridgestone), who won effortlessly his two heats, is the new leader, followed by the Polish Karol Basz (Kosmic-Vortex), who won the third race. Next to the two drivers, in the Prefinal A and B respectively, the Danish Nicklas Nielsen and the Spanish David Vidales (both on Tony Kart-Vortex): they managed to finish their races always in the top three positions. Jack Doohan (FA Alonso-Vortex), the leader after yesterday’s qualifying, placed fifth and tomorrow he will start on second row of the Prefinal B.

LORANDI RULES IN KZ2.
The WSK appointment is the ideal training ground for the Italian Alessio Lorandi (Tony Kart-TM-Bridgestone), who is about to finish his season in GP3 at Yas Marina, in the Arab Emirates. He did his best in Adria in KZ2: he won the three heats he took part in and, of course, he will be tomorrow’s pole-sitter in the Prefinal. The Italian Francesco Iacovacci managed to stay close to Lorandi, placing always second: he will start from the front row. Third and fourth position on the grid for the French Adrien Renaudin (Sodi-TM) and the Russian Ivan Chubarov (Croc-TM).

SMAL IS THE LEADER IN THE OKJ HEATS.
In the heats, the two fastest drivers of yesterday’s qualifying – the British Jonny Edgar and Dexter Patterson (both on Exprit-TM-Vega) – won but had also some trouble in the other races, which made them lose a few positions. So, the intermediate standings was more favourable to more consistent drivers such as the Russian Kirill Smal (Energy-TM) and Luca Bosco (Tony Kart-Vortex) from Nice: they finished the stage in the first two positions and tomorrow they will start from the pole positions of the two Prefinals. Edgar finished third and he will fill the second slot – next to Smal – in the Prefinal A. Fourth position for the driver from Singapore Alex Kattoulas (Exprit-TM), who will occupy the position next to Bosco in the Prefinal B. Patterson only managed to finish in 14th position, which means that he will have to start from the 4th row on the grid of the Prefinal B. 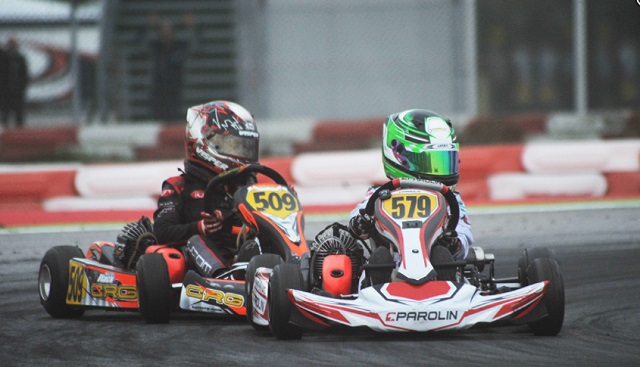 STENSHORNE LEADS IN THE 60 MINI.
The Norwegian Martinius Stenshorne (Parolin-TM-Vega) put in an almost flawless performance: three victories and a second place, a result which allowed him to gain the pole position of the 60Mini Prefinal A. Next to him the Italian Andrea Antonelli (Tony Kart-Vortex), who won once. In the Prefinal B, the pole sitter will be the Italian Alessandro Cenedese, who won twice and scored two second positions. First row also for the American Nikita Johnson (both on Parolin-TM): thanks to his consistent performance, he will start from a very good position.

THE WSK FINAL CUP WAITS FOR ITS FIRST WINNERS.
Tomorrow, at the end of the Finals, we will know the names of the winners of the first out of two rounds of the WSK Final Cup, which is taking place at the Adria Karting Raceway. The final results are still very uncertain, given the unpredictable output of today’s heats which was far from what we expected after yesterday’s qualifying. The 213 drivers who are challenging each other on the 1302 metres of the track in Adria (Rovigo, Italy), are going to fight hard to score as many points as possible in this first round of an event which will finish next weekend with its second and last round.

THE FINAL DAY LIVE IN STREAMING.
There are going to be great battles on track tomorrow, and WSK Promotion is ready to give the event a full media coverage thanks to the live streaming which starts at 10:30am on the official website www.wsk.it. The streaming will cover all the races scheduled for tomorrow: the Prefinals and the Finals of all the categories.

The provisional standings of the WSK Open Cup after the 1st...