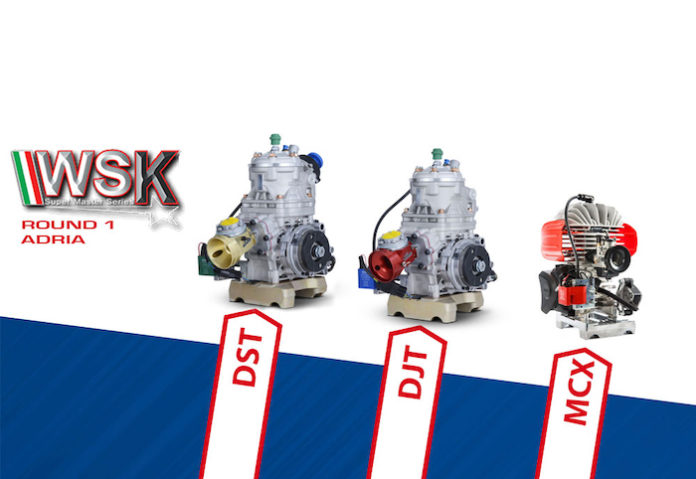 OK
Pedro Hiltbrand (Tony Kart Racing Team) is the one awarding the first round of the WSK Super Master Series at the end of a hard-fought Final. The power of our Vortex DST engine is crucial throughout the Qualifying Heats to allow Pedro recovering 26 positions in the rating; the engine is supporting him in his comeback in the final, where he starts at the fifth position and finally takes the lead.
Great protagonist of the weekend in Adria is Joseph Turney (Tony Kart Racing Team) too: running for the final success after the victory of two Heats and the pre-final, in the last race on Sunday the Englishman, who started from the pole position, managed to be in the lead for 17 laps, but unfortunately loses positions due to a contact, closing sixth.
Also Thomas Ten Brinke (Ricky Flynn Motorsport) is standing out, reaching the second position in the Final before being forced to withdraw. This is a pity, because the Dutchman had the right stuff to do well, as he proved with the second place gained in pre-final.

OKJ
Vortex DJT engines are 13 in the line up of the OKJ Final. Among them, the kart driven by Ugo Ugochukwu (Ricky Flynn Motorsport), who ends on the second step of the podium after being in the lead. For the American, who is starting from the sixth position in the final, the excellent weekend counts also a victory and a second place in the heats.
The other engine of ours getting close to the victory is the one of Karol Pasiewicz (Tony Kart Racing Team): afterwinning the prefinal, he then ends 4th in final after being in top positions for most of the race. Throughout the weekend, the Pole proves to be one of the fastest drivers of the group, being the best one powered by Vortex in qualifying, with the fourth position, and scoring four best laps, a victory and two second places in the Heats.
Alexander Gubenko (Kosmic Kart Racing Department), closing 9th after recovering 10 positions, completes the list of the rivers powered by Vortex engines in topten.
The other victories of the weekend marked Vortex are conquered by Artem Severiukhin (Ward Racing), who wins two Heats and scores two best laps.
In Final B, the DJT engines of Freddie Slater (Ricky Flynn Motorsport) and Flavio Olivieri (Newman Motorsport) conquer the podiums with a second and a third place respectively.

MINI
At its first race, the new Vortex MCX engine immediately centres a podium thanks to the third position reached by Jimmy Helias (Tony Kart Racing Team), conquered at the end of a brilliant comeback from the ninth position. The Frenchman makes the most of our engine’s performances throughout the weekend, without ever finishing a heat out of the top ten. The debutant Kai Sorensen (Tony Kart Racing Team) also reaches the top ten in the final: eighth at the finishing line after collecting a second and third place in the Heats. Amazing comeback by James Egozi (Tony Kart Racing Team), who manages to overtake 13 drivers in the decisive race.

The video footage of the WSK Super Master Series rd.2 –...