Home Events Victory and title at the WSK Final for Stanek 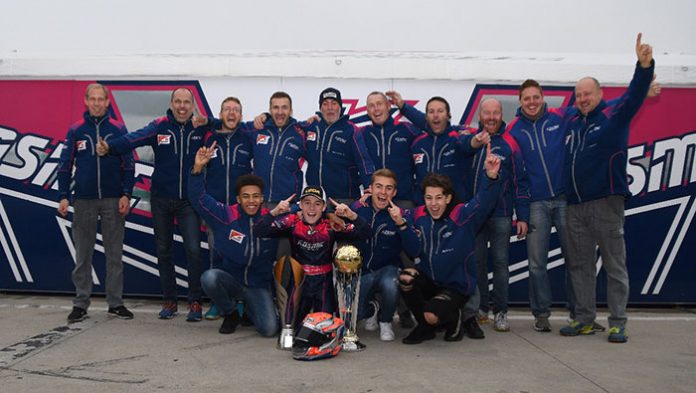 It was a complete triumph in OKJ class for the Racing Department, with Stanek winner and champion of the WSK Final Cup.

OKJ. The deserved victory in OKJ class of our Roman Stanek gave us also the opportunity to win the WSK Final Cup’s title. Roman and the Racing Department has been working for the success since the heats, closed at the fourth place.
The run for the success continued with the third position in B prefinal and came true with a great performance in the final. On third lap, Roman took the lead of the race and kept it with more and more gap, until he crossed the chequered flag, gaining victory and title.

OK. We were the protagonists also in this class. Karol Basz won two heats (out of two) while Noah Milell has been really competitive, even though he lost some time due to a penalty in the first heat (B-C).
In the prefinal Basz and Milell still confirmed to be at the top, ending third and fourth place, respectively, and in the final they have both obtained good scores with Milell gaining the fifth position and Basz the seventh one. Thanks to such score, Karol places fourth in the Final Cup’s ranking.

KZ2. The Final Cup’s weekend was positive for both our drivers, Alex Bengtsson and Oliver Rasmussen, who came sixth and seventh place respectively in the very final, with Oliver obtaining the ninth position in the absolute ranking, preceding his teammate.

WSK Final Cup, first round on next weekend in Lonato

Marcus Armstrong and Job Van Uitert to fight for the title...