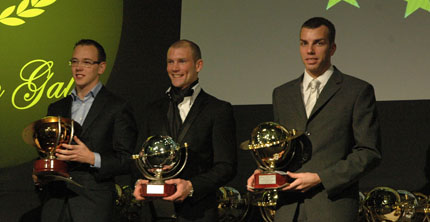 The last date of the 2011 WSK season coincides with the first WSK event for 2012. And it won’t be on the track, but at the Centro Fiera del Garda in Montichiari (close to Brescia) in Italy “at the same time” – WSK releases – “as the annual Kart and Race expo, which will take place between the 13th and the 15th of January.” In fact, January 13th is also the date of the WSK Gran Gala, which will award the best drivers and teams of the WSK season that ended with the Final Cup in Ortona (Italy) this past October 30th.

Indeed, all the “creme de la creme” of International karting will be there to celebrate the success conquered over three events (WSK Euro Series, WSK Master Series and WSK Final Cup ) and in most cases to place the bets for the new WSK season, for which official dates and tracks have already been issued – beginning with collective tests on February 5th at the La Conca Circuit in Muro Leccese (Lecce, Italy). CLICK HERE to view the 2012 WSK Schedule.
And the great novelty will be the “Driver of the Year” award: all WSK championships and categories will be taken into consideration to decide the driver who more than anyone deserves recognition for his skills at the wheel.