Home Events The world final of the 2012 Red Bull Kart Fight at the... 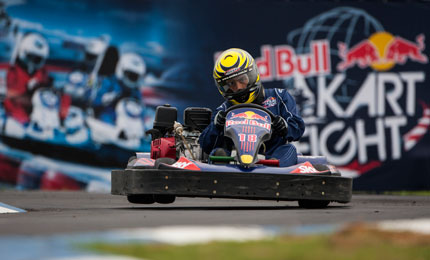 The International Final of the Red Bull Kart Fight will take place on Saturday, December 8 and Sunday, December 9 at the Motorshow in Bologna (Italy).

The initiative we have already talked about (CLICK HERE to read the last news) has  has offered kart lovers age 16 and over and without federal affiliation to battle across 20 countries for a chance to race in their national final and from there to win a ticket to the decisive World battle in Bologna, which will decree the name of the world’s fastest amateur driver also thanks Birel, partner of the initiative .
The Red Bull Kart Fight international final will be just one of the many feature events included in the intense weekend schedule of the Red Bull Speed Day, which will see the Red Bull Formula 1 bullets alternate with Rally cars, going through Nascar. The title of international champion will be assigned after a program that goes from free practice and timed qualifyings (Saturday, December 8) to Race A and B and the super final (Sunday, December 9) and will go to one of the 20 national finalists listed here below.  Happy racing to all!

THE NATIONAL TITLE WINNERS OF THE 2012 RED BULL KART FIGHT

ROK Cup 2020: a new calendar is being defined

MICHAEL D’ORLANDO HAS A STRONG SHOWING IN ROUND...