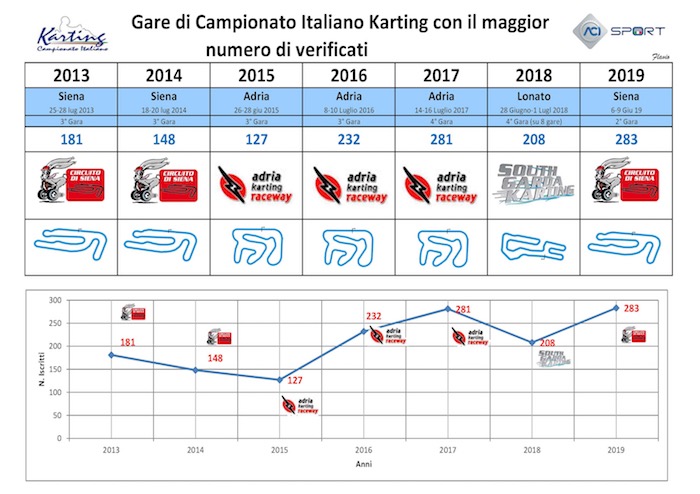 The Italian ACI Karting Championship 2019 edition ended with a great success, for quality and quantity of teams and drivers. This year the record of 1123 participations was reached in an Italian Championship played on 5 races with 8 categories: Castelletto di Branduzzo, Siena, Sarno, Adria and Val Vibrata. The average per test was 225 drivers, with a peak of 283 drivers in Siena, a new record from 2011 to the present.

The KZN proved to be the balance in the disputed tests, counting 106 drivers in Siena in the two categories, Senior and Over, increasing attendance on the Tuscan circuit to a total of 283, then 78 KZN in Sarno with a total of 248 riders and 69 KZN in Val Vibrata with a total of 196 pilots. However, the two tests that did not have the participation of KZN are also good. Without the KZN, there were 208 drivers in the first race in Castelletto di Branduzzo and 188 in the fourth round of Adria.

On April 5th in Triscina the opening of the Italian ACI...

The provisional turnout for the second round of the Italian ACI...

The third round of the Italian ACI Karting Championship got underway...