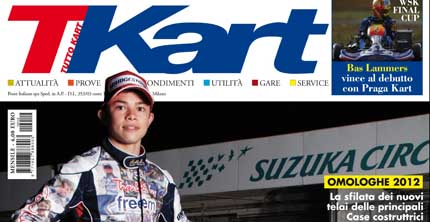 For the second consecutive year Nyck De Vries wins the CIK-FIA World karting championship. One last high note from a kid who on kart has been amazing everyone and not just for his speed. In a long interview the Dutch driver tells us all about  what karting is for him, his life, and what now awaits him in the world of cars. And this issue is packed with lots of other hot contents…

First of all, we interviewed Nicolas Todt, Jean’s son and owner of  ART Grand Prix, and he tells us all about how he wants to make his entrance in the world of karts immediately as a star, also thanks to Armando Filini’s expertise. And, of course, we also give you detailed coverage of all the newly homologated chassis and unveil all the karting secrets that will run through 2012.
What’s more, we asked ourselves how much we could learn from a day with a karting champion and found out by going on track: following Davide Forè’s guidelines, entrepreneur and kart lover Massimo Fasana managed to hone down two seconds. And, as always, you’ll also find the faces and stories of the “folks from the paddock,” lots of updates in “News of the World” and reports about races of all levels: from the regional (including a special on CSAI “zones”) to the international ones that have produced the final champions for 2011.

All you have to do now is run to the news kiosk and get your hands on all the karting you can.