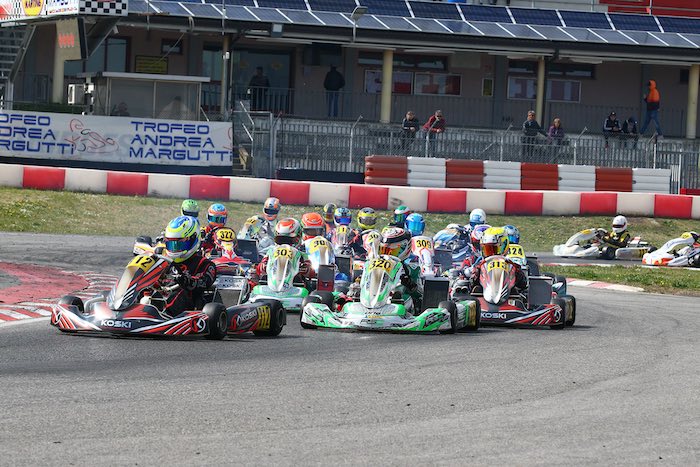 The 31st Andrea Margutti Trophy is behind the corner. The event organized by Parma Motorsport is part of the FIA Karting international calendar and will take place from February 27th to March 1st 2020 at the South Garda Karting in Lonato.

The entry list is already quite long in all the categories, namely the National Mini, OK-Junior and KZ2, while Junior and Senior will run the first of the three rounds of the Iame X30 Trophy. Entries will be accepted until February 20th, 2020.

KZ2 is particularly crowded and counts 64 drivers in the provisional entry list. Among these, several top drivers decided to be present like the multiple champion Davide Forè, that will compete for Renda Motorsport on Birel Art-Vortex, after winning the Margutti Trophy back in 2015. Among the champions, the Croatian driver and Trophy winner in 2013 Kristijan Habulin will compete on TB Kart, while Giacomo Pollini will be on Formula K-Tm after winning the trophy in 2016. Maranello Kart and Team SRP Racing will field a big squad led by Fabian Federer, who won the trophy in 2012. Team Modena Kart will make its debut on Birel Art chassis fielding the reigning Italian champion Simone Cunati and Luigi di Lorenzo. Mirko Torsellini will also be present on KR-Iame. CPB Sport is all set to field several drivers on Sodikart, starting from Jean Nomblot and Lorenzo Giannoni, who won the recent Trofeo delle Industrie. 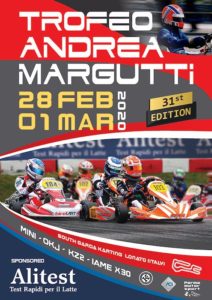 In OK-Junior a lot of emerging talents can aim for the win and have the chance to shine. Among these, several foreign drivers will be fielded by Haase Racing, Solgat, Koski Motorsport, SRP, TB Racing Team that will field Kiano Blum and a lot of other drivers. Several drivers will make their debut switching from Mini in this occasion.

A lot of protagonists will make it to the track also in Mini. In this category Team Driver Racing will field a big squad that includes also the young Japanese Berta Kean Nakamura on KR-Iame, who has already been among the protagonists of this early season. The competitive Russian Gerasim Skulanov will be fielded by Team Formula K while the Thai Enzo Tarnvanichkul by Baby Race. Team Gamoto also has good chances to fight for the top in the Andrea Margutti Trophy with its big squad.

In the Iame X30 Trophy, Junior is all set to make its debut at the Andrea Margutti Trophy. The presence of Italian drivers is predominant in this class. Among these, last year’s protagonists will play their cards to shine: 2019 winner Federico Rossi will compete for Team Pacitto, his main rival Nicholas Pujatti for Team Driver, and the third in last year’s standings Andrea Barbieri for TB Kart. The winner of the ACI Karting Italian Cup Alessandro Silvaggi will also be present.

X30 Senior will be quite crowded. Team Autoeuropeo will field Danny Carenini, who came second in the X30 Italian Series in 2019 and the third classified Vittorio Maria Russo, who won the Andrea Margutti Trophy in 2017. Among the many drivers fielded by Team Driver, an eye will have to be kept on Enzo Trulli. The X30 ACI Karting Italian Junior Champion Francesco Pulito will make his debut in the higher category in this occasion. Federico Albanese will compete for Gold Kart Racing and the Pole Maciej Szyszko for Team ACR.

Never so many drivers at the opening of the 28th Autumn...

Interview with Giovinazzi, between karts, F1, and…