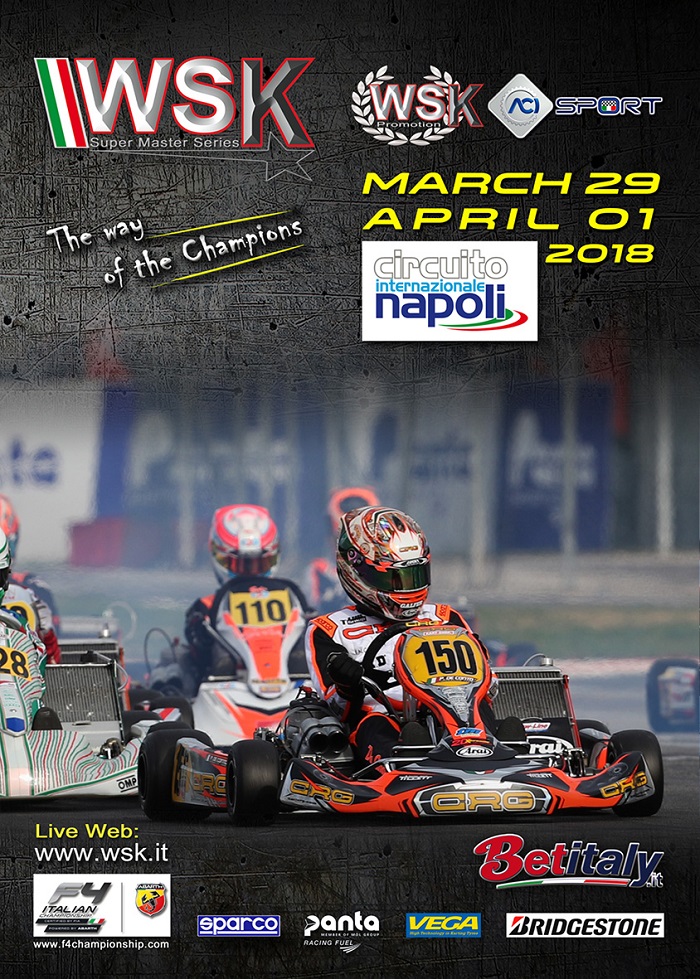 The sprint to the line for the classifications of WSK Super Master Series is coming fast.
The beginning of Spring sees WSK Super Master Series drivers getting ready for the fight, eying the closing stages of the Series with the double round to be held at the International Circuit Napoli of Sarno (I): next weekend, from March 28th to April 1st, the replay of the second round will hopefully take place in different weather conditions compared to the abundant snow fallen in Lonato (Brescia, Italy) last March 4th, that forced organizers to cancel the race. One week after that, the fourth and closing round of the 2018 Series will take place on the same track of Sarno, that will crown the new champions of the WSK 2018 classifications.

Racing action from Sarno in live streaming
The double round in Sarno will also feature a double live streaming appointment, as both racing weekends will enjoy the usual live streaming coverage from the website wsk.it. The images from the racing field will be available during the two consecutive racing Sundays of April 1st and 8th covering, as usual, from Prefinals and Finals.

An eye on the classifications in Sarno.
The Italian Paolo De Conto (CRG-TM-Bridgestone) is the new leader of KZ2 with 132 points. Behind him, some very respectful rivals: the Italian driver from Locorotondo (Bari) Alex Irlando (Sodi Kart-TM) is second at 101 points and is called to bounce back in Sarno. He is followed by Marco Ardigò (Tony Kart-Vortex), who is third 3 points shy. The German Hannes Janker (KR-Parilla-Bridgestone) is leading OK at 144 points, but his rivals closed in on him in Muro Leccese (Lecce): the Brit Jonny Edgar (Exprit-TM) is second in the standings at 128 points and leads the Dane Nicklas Nielsen (Tony Kart-Vortex) in third at 122 points. The Russian Kirill Smal (Tony Kart-Vortex-Vega) did not have much of luck at the La Conca World Circuit last Sunday, but he retained the lead of OK Junior at 157 points. The Brazilian Gabriel Bortoleto (CRG-TM) and the Italian Gabriele Minì (Parolin-Parilla) promise sparks though. The two are the closest to Smai in the classification and stand equal on points at 121. The Norwegian Martinius Stenshorne (Parolin-TM-Vega) and the Italian Andrea Antonelli (Energy-TM) will challenge each other in 60 Mini, as they are respectively first and second in the provisional standings at 150 and 136 points. The Czech Tymoteusz Kucharczyk (Parolin-TM) is third and ready for the charge at 108 points.

Qualifying heats day at the third round of the WSK Euro...