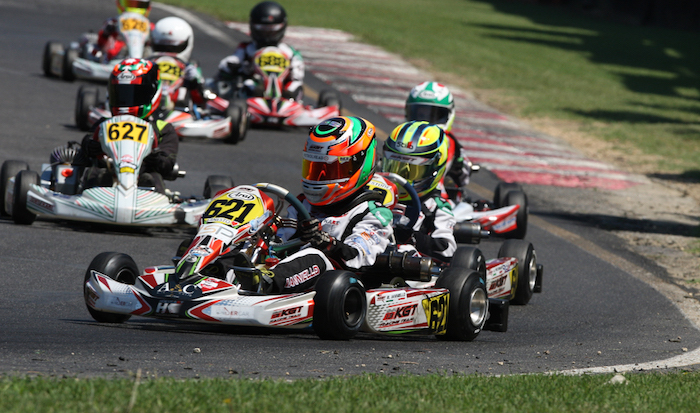 Bicciolo already had the title in the pocket of the Rok Expert on the eve of the event and raced for the honor of signing, in view of the more demanding appointment of Adria, with the Rok Cup Italia.
In the other categories, the rookie of the Mini, Pecoraro, the excellent Junior outsider, Bellandi and the reigning Senior champion, Zuccante, won. But who are the champions? Let’s find out their names.

MINI ROK. IANIELLO AT THE PHOTO FINISH
The pre-final smiled at Ianiello, who, from pole position was marked by his rival in the championship, Pacini, who came second.
In the final the brawl was all between the two contenders for the title, Pacini and Ianiello. The former presented himself as a leader with the disadvantage of having to discard a result, while Ianniello left for the last round with the knowledge that he could forfeit all the useful points, since he had already missed an event (useful as a waste).
The challenge between the two Rokkers developed between overtaking and overtaking with Pierozzi and Pecoraro chasing each other at a distance, being able only to watch the evolution of the two challengers.
Between overtaking and a disturbing maneuver, Ianniello and Pacini, ended up out of play in the sixth step. The contact between the two has given way to success in Pecoraro and given the place of honor to Pierozzi.
Ianniello, after being able to start again, returned to the command of the race but was relegated to third place due to the nose off seat. Despite the 5 second penalty, Ianniello climbed to the third step of the podium and made the Rok Centro 2019 title his own.
Pacini crossed the finish line fifth, seeing the area title fade by 21 points.
Pecoraro won the first race of his still short career and took the crown of Rookie 2019 in the lead.

JUNIOR ROK. CHIURATO CONFIRMS THE EXPECTATION, BUT WHAT A FIGHT!
The Junior Rok, on the eve, left few chances for Fantozzi, but the Lazio Rokker did not lose heart and made life very difficult for the future champion Chiurato.
In the pre-final it was Fantozzi himself who commanded the race, chased by Chiurato, until the two hooked, leaving the green light to victory at Belmonte.
In the final the duel between Fantozzi and Chiurato was repeated, with the two confronting each other for the victory together with Bellandi. In the leading trio Fantozzi and Bellandi were particularly active, while Chiurato, third, studied them, also thinking about the championship.
In the last two laps the race was decided, with Fantozzi taking the lead and Bellandi immediately responding, going on to win with merit. The new area champion, Chiurato, did not miss the opportunity to climb to second place, taking advantage of an uncertainty by Fantozzi during the brawl with Bellandi.

SENIOR ROK. ZUCCANTE CONFIRMS HIMSELF AS CHAMPION.
Zuccante wiped out the tension of the win by signing the pole and winning the pre-final in a clear way.
In the final it was always Zuccante who took the lead in front of the other contender for the title, Mezzetti, Ortenzi and Sisti.
In the middle of the final Ortensi confirmed that the accident of the last weekend at Adria was already a distant memory and, after having slipped Mezzetti, he started to follow the Zuccante tread.
Ortensi’s attempt to take the second victory of the season was rejected by Zuccante, who gave a clear answer, leaving the opponent in second place.
With the third success of the season, Zuccante confirmed his position as an area champion, projecting himself towards the Rok Cup Italia with morale to the stars.
On the podium, in third place, was Mezzetti, author of a growing championship, who made his debut in racing only at the beginning of 2019.

Great deal of progress at the WSK Open Cup