The 20th edition of the prestigious Rotax Max Challenge Grand Finals returns to Europe after a trip across the Atlantic to Brazil last year. On the Circuito Internazionale Napoli in Sarno, the annual Rotax event takes place from 19 to 26 October 2019. This year, Team France is composed of 16 drivers rewarded by 3MK Events for their results at the NSK Championship. FFSA Championships and Cups of France, as well as the new Rotax Max Challenge International Trophy held successfully at Le Mans in late August.

Among the 360 ​​best Rotax pilots from sixty nations and divided into 6 categories, Team France 2019 is right to believe in its chances. The 16 French can indeed approach the competition of Sarno with legitimate ambitions after their remarkable performances in the hexagon, during races whose level is indisputable. The last two years have been particularly good for French karting at RMCGF with the recent victories of Paolo Besancenez (DD2), Marcus Amand (Mini), Louis Iglesias (Micro) and the beautiful catwalks of Augustin Bernier (Mini), Sami Meguetounif (Junior), Jean Nomblot (Senior) and Charly Hipp (DD2 Master).

The three key words of the RMCGF are always, sportsmanship, fairness, and team spirit. That’s why the Nations Cup, which brings together drivers from all categories of the same country under the same objective, is highly prized in addition to individual results. The Team Contest highlights the look of the teams, the appearance of their stands and their originality. The fans are put to contribution through a Facebook vote. Here are two more opportunities to shine for France! 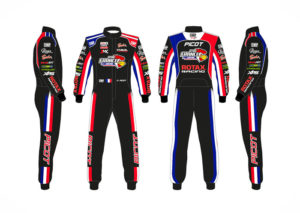 The OMP France supplier has been selected as the official supplier of the TEAM France 2019. 3MK Events offers all the drivers of the Team France a tricolor clothing package including a tailor-made combination, a pair of gloves, two T-shirts and a softshell.

VICTORY FOR STARWORKS MOTORSPORT AT SIX HOURS OF THE GLEN

18th Rok Cup Superfinal. The innovatory edition is a success