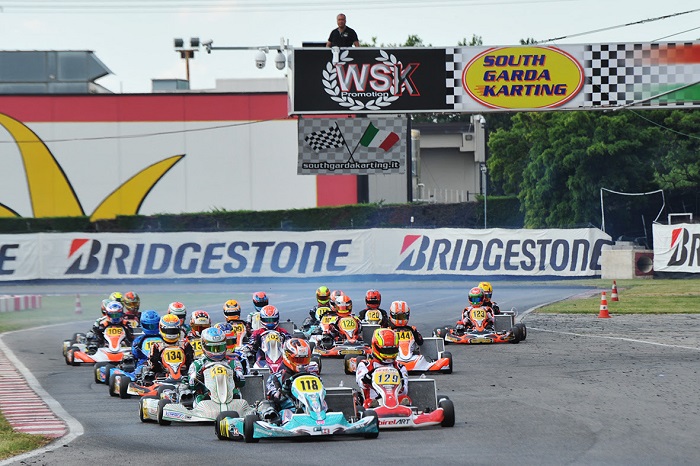 Eying the Finals of WSK Open Cup.
As expected after qualifying held yesterday, the favourite drivers in the fight for the victory of WSK Open Cup bounced back today. Each one of the 225 verified drivers at South Garda Karting di Lonato (BS) will play all their cards out in this single-race event that will reach its conclusion tomorrow with Prefinals and Finals. The whole racing day will be available through live streaming at wsk.it.

Prefinals KZ2 with Celenta and Iglesias in pole.
Among the three drivers that have won two heats in KZ2, the overall best result was obtained by Francesco Celenta (Praga-TM-Bridgestone, above), who pulled a second place in his third race. Celenta will start Prefinal A from the pole position and will have Marco Ardigò (Tony Kart-Vortex) next to him, as the latter won two races today. The French Jeremy Iglesias (Formula K-TM) also secured two wins and will start Prefinal B from the pole position, with yesterday’s poleman Riccardo Longhi (BirelArt-TM) set to start next to him.

Harry Thompson gets the lead in OK.
The British driver Harry Thompson (FA Kart-Vortex-Bridgestone, above) won yesterday the first heat after the Italian Lorenzo Ferrari (Parolin-TM) claimed the pole position. Things did not change today either, as Thompson won the remaining two heats and secured a pole position start in tomorrow’s Prefinal. Alongside him, Barbados’ Zane Maloney (FA Kart-Vortex), who is also a serious contender to the victory and today claimed two second places. The good results secured today allow the Italian Leonardo Marseglia (KR-Parilla) and his team mate Mattia Michelotto to start from the second row. Ferrari’s results did not match up yesterday highs and therefore he will start from the third row, as Luigi Coluccio (BirelArt-TM).

Barnard and Smal on pole in OK Junior.
The great momentum of the British Taylor Barnard (KR-Parilla-Vega, above) in OKJ continued today. After the quickest time in qualifying, he claimed three wins today and secured the pole position for Prefinal A. Alongside him, Gabriele Minì (Parolin-Parlla), who won one race today. The pole position of Prefinal B went to the Russian Kirill Smal (Tony Kart-Vortex), who won two heats. He will have the Dutch Thomas Ten Brinke (FA Kart-Vortex) next to him. The other winners of the day were the Russian Nikita Bedrin (Tony Kart-Vortex) and the Brits Conrad Laursen (FA Kart-Vortex) and Luca Griggs (Exprit-Vortex).

Antonelli and Eykmans on pole in 60 Mini.
The Italian Andrea Kimi Antonelli (in the photo above) secured four wins in as many heats and therefore locked out the pole position of Prefinal A in 60 Mini. The Jamaican driver Alex Powell (both on Energy-TM-Vega) deserved to start next to him as he secured one win. Ean Eykmans had a victorious day and will start Prefinal B from the pole position. The Belgian driver lost out to Antonelli, but won all the remaining three heats. The first row will be completed by the British driver Coskun Irfan (both on Parolin-TM), who took one win. One victory went also to the Norwegian Martinius Stenshorne (Parolin-TM).

the video footage of the WSK Final Cup – Adria Karting...