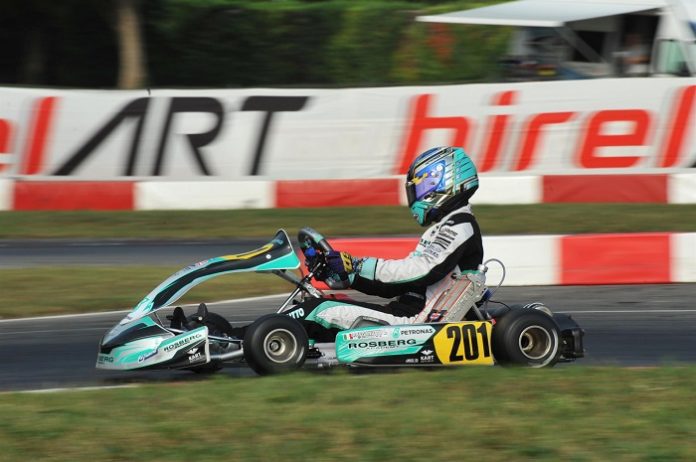 New leaders ready for the final challenge in live streaming from Lonato.
Qualifying heats have been quite hard-fought, as expected, at the WSK Final Cup in Lonato. This is the first of the three rounds that end WSK Promotion’s season 2018. Today four new contenders put their name forward for the final win. The live streaming feed will capture all the racing action of the 259 drivers contesting Prefinals and Finals tomorrow from 10:50, on the official website wsk.it.

Lorenzo Travisanutto, still on top in OK.
The Italian Lorenzo Travisanutto (KR-Parilla-Bridgestone, in the photo above) kept the lead in OK thanks to three wins in as many heats. He, therefore, secured the pole position for Prefinal A with the Dane Nicklas Nielsen (Praga-Vortex) set to start alongside him thanks to P2s. The second row will be occupied by the Italian Luigi Coluccio (BirelArt-TM) and Barbados’ Zane Maloney (FA Kart-Vortex), as the latter won the closing heat. Prefinal B’s pole position went to the British driver Dexter Patterson (KR-Parilla), who will have the Swede Dino Beganovic (Tony Kart-Vortex) alongside him. Both secured one win each. Gabriel Bortoleto and Kas Haverkort (both on CRG-TM) had a good day too and secured a second-row start.

Alex Powell on top in 60 Mini.
Alex Powell (Energy-TM-Vega, above) is the surprise of 60 Mini, category that the Jamaican driver has been dominating winning all his 5 heats. The British driver Coskun Irfan (Parolin-TM) secured two wins and completed the front row of Prefinal A, leading the Dutch Ean Eyckmans and Arab Emirates’ Keanu Al Azhari (both on Parolin-TM). The Italian Brando Badoer (Parolin-TM) secured the pole position of Prefinal B as he claimed four wins, while the Swede Joel Bergstrom (IP Karting-TM) will join him in the front row. Behind them, Andrea Filaferro (BirelArt-TM) and Cristian Bertuca (Parolin-TM) completed an all Italian second row.

James Wharton surprising OK Junior.
The positive impression made yesterday in OKJ was confirmed today by the Australian James Wharton (FA-Vortex-Vega, above), who secured the pole position of Prefinal A thanks to two wins. Alongside him, the Swede Norton Andreasson (KR-Parilla) also claimed one win, while the Colombian Diego Contecha (Parolin-TM) and the Brit Taylor Barnard (KR-Parilla) complete the second row. The Dutch Thomas Ten Brinke (FA Kart-Vortex), claimed one win and two P2s in the heats and will start Prefinal B from the pole position, with the Italian Gabriele Minì (Parolin-TM) alongside him after a regular series of races. Behind them, the second row will be occupied by the Russian Nikita Bedrin (Tony Kart-Vortex), who was the quickest yesterday but this morning struggled a lot in the first heat, before winning the following three races.

Bas Lammers charging in KZ2.
Bas Lammers (SodiKart-TM-Bridgestone, above) bounced back as expected in KZ2 and won all three races in the program. The Dutch driver secured, therefore, a pole position start for the Prefinal, while his teammate from France Anthony Abbasse was close to him in the first two heats before a hiccup in the third that relegated him low down the pack. The Italian Matteo Viganò (Tony Kart-Vortex) claimed a second and third as best results and will, therefore, line up alongside Lammers. The French Emilien Denner (Kalì Kart-TM) also secured some good results as the Finn Simo Puakka (Tony Kart-Vortex). These two sure contenders to the final win will start Prefinal from the second row of the grid.

Hot conditions and a good entry of drivers set the first...