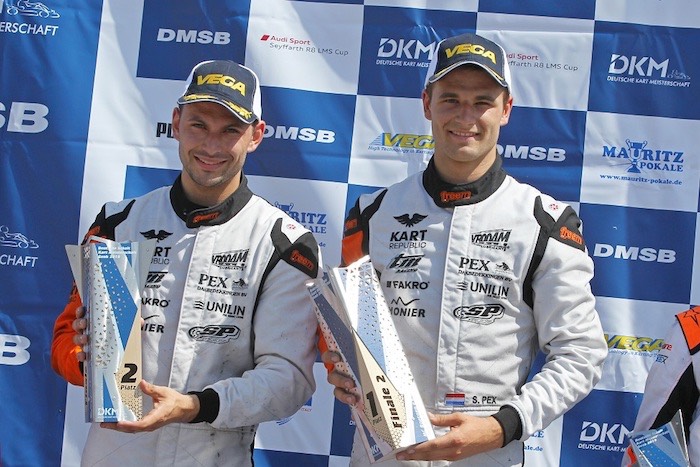 orrit Pex has won the DSKM championship at the German series a record six times so far, not to overlook his multiple world, European and national titles, so the 26-year old has undeniably set the bar very high for his younger brother. Stan Pex has had an exceptional DKM championship to date this season, featuring on the podium at all four rounds. At the previous event in Kerpen last month, the 20-year old was virtually unbeatable, taking the victory in both heat races and finals to make it an historical hat-trick at the famous Erftlandring circuit for the past three consecutive years. He is also responsible for much of the work behind the scenes to prepare their material.

“We had a very good weekend!” Stan Pex explains, “It started at the beginning on Friday when we were really fast from the first moment. It didn’t matter which chassis I used, they were all good. We made the best decision with my mechanic in selecting my chassis and set-up, together with my dad preparing the engines and looked at what we can do better. During the weekend we found a little bit more and it’s honestly quite hard to really go on the limit without running the engines [before the sessions on the trolley], but yeah, we did it and the speed was there.”

Stan has been classified as the winner in four out of his last five finals, along with five of the six heats in the KZ2 category at the DKM, also claiming pole position in Wackersdorf at round 3. Narrowly missing pole position to defending champion Fabian Federer in official timed practice on Saturday, Stan won both qualifying races making it a Pex front row lockout for the first final. The Limburg driver currently leads the overall standings by 64 points following his Final 2 victory on Sunday, where he also posted best race lap.

“It was difficult to win both finals with the strategy we had with the tyres. The three people around me in Final 1 all had four new tyres and I had only two new tyres, but we were still third [after a spoiler penalty – P5], although I had the speed to win in the end, but didn’t want to take the risk. The second final was quite easy for me, with two new tyres, which I knew I could win.” Stan added “For sure, I would not be happy with second. We took a gap and then I was looking where my brother was, so I was very happy for him because it’s also important for me that he is fast as well. We’re working hard for both of us so I think it’s a good weekend for our team.”

While Jorrit has recently won the FIA Karting European KZ title once more, as he did in 2018, he’s failed to have the luck throughout the German series. Even though he has finished second in three of his last four finals and appeared at the prize-giving ceremony in the top five places at each round this year, the former DSKM champion is ranked fourth in the points with one to go. Still proving to be a strong contender to win the deciding round, Jorrit was without doubt convincing over the weekend in Belgium, after qualifying P3, winning one heat and finishing second only to Stan in the other, starting alongside him in Final 1 and setting best race lap too.

As always, Jorrit can never be discounted or underestimated, which is exactly why he has been DKM champion six times and won the European Championship again this year, consistently at the top barring anything unforeseen. “We can be really pleased with our results this weekend here in Genk as a team,” Jorrit said, “I’ve just had bad luck this year at the DKM unfortunately, having some issues with various things happening at all the other rounds. It’s clear we have got good speed, where sometimes Stan is faster and other times I am. Everything with the package needs to be complete; the chassis and set-up need to be good together with the driver and the engine, yet it’s often hard to get that last extra pace you’re looking for. We never stop chasing that and for me, it is perfect when Stan or I are able to win. While I can be fast and still beat these guys at this level, I’ll keep pushing in the racing to achieve the best I can and we’ll keep working on it.” 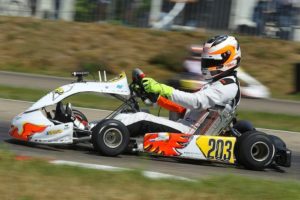 With regards to the championship, Stan remains focused on the racing going into the last round at the Schweppermannring in Germany. “I don’t really think about this so much, I just need to drive as I have a good lead in the points and I know I don’t need to do anything apart from focus on our performance. I’ll just go to the next race as I went to this race, and as I went to the first round. Here at Genk I am always quite fast, although it is also Jorrit’s home track too, but he is always fast in Ampfing so I am looking forward to the last round now. I actually think I can learn something from him there.”

When asked how the situation is for these two amazingly competitive brothers, who are continuously working, travelling, racing and competing at such a high level, Stan replies “We have a good relationship and I have learnt the most from Jorrit over the years. Now, I am getting faster… he knows I am younger, but he doesn’t care about this, we are always just seeing how we can both improve to be as quick as each other. We are always racing together, it’s not him against me, we’re close as brothers and teammates, and we just want to win.”

The change to a new brand and welcome new challenge for Pex Racing this season has proven to be a positive one. As team owner, Stan realises the significance of having strong partners and grateful for the opportunity providing a good partnership for development. “We test a lot of chassis’ for Kart Republic, which is important for them, also now in KZ and they have had the results. Jorrit has won the European on Bridgestone and I am winning the DKM on Vega, and we are fast everywhere in all conditions, wet and dry, with both tyres. We just want to win and it’s the same for Dino Chiesa at Kart Republic. It feels very comfortable to work together.”

The third member of the Pex Racing line-up at the DKM is one of Stan’s budding young superstar drivers, Senna van Walstijn. The 16-year old also from The Netherlands is in the title fight as well at the DKM, racing in the KZ2 Cup class, where he is only a few points from securing the championship in his first international season in the shifter. Senna already boasts a handful of karting titles since he was a cadet, including his impressive victory to take the prestigious Rotax Grand Finals senior title in Brazil at the end of 2018 with Stan as his technician and coach.

Of course, much of the success of the Pex family racing has been based on their endless dedication and commitment as a team which has led to Stan building his own career within the framework of the family business. However, the next generation for ‘Pex Racing’ may have just arrived! Stan is not leaving anything to chance and has already put future plans in place to be prepared, “I’ve recently become an uncle! My oldest brother Yard has just had a baby and it’s very nice, he’s very special. It’s a boy – Yves Pex. I’ve already bought him a chassis and we will see if he would like to drive. He’s still a bit young now, but if he wants to he’ll get the same support we do in our team. Yves was here on the track today for our races and at the podium as well.”

The fifth and final edition of the DKM 2019 takes place at Ampfing, Germany on October 4-6 just two weeks after the highlight KZ event on the FIA Karting Calendar – the World Championship, which will see the Pex Racing team travel south to South Garda Karting in Lonato, Italy.

Great show in Las Vegas for the 2016 Skusa Supernationals