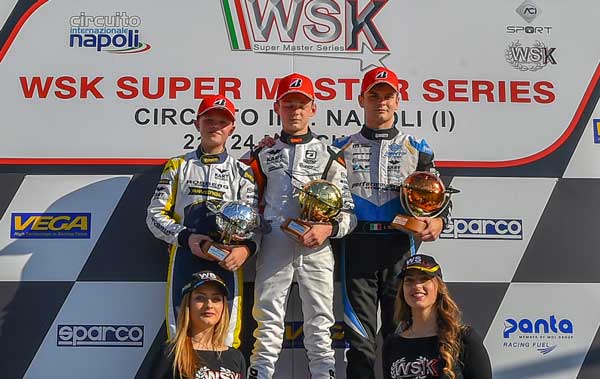 Dexter Patterson has been untouchable this weekend in the Circuito Internazionale di Napoli (Sarno). The Kart Republic driver was the fastest all weekend long, taking pole position in qualifying practice, winning all qualifying heats, prefinal and also the final to became the new 2019 WSK Super Master Series Champion in OK class.

After dominating the whole weekend, Dexter Patterson (KR/Iame/Bridg) continued untouchable on top. The British driver won prefinal A, getting the pole position for the final and extending the lead provisionally in the championship.

Patterson’s rivals for the championship completed the job in prefinal B, with Taylor Barnard (KR/Iame/Bridg) wining ahead of 2018 World Champion, Lorenzo Travisanutto (KR/Iame/Bridg). So, all was still open despite the big advantage in points for Patterson.

Valtanen was overtaken by Brazilian Gabriele Bortoleto (CRG/Iame/Bridg) already on lap 2. The CRG official driver immediately scaped from the Finn driver who had to defend fourth position from the attacks of Dino Beganovic (Tony Kart/Vortex/Bridg), Lorenzo Travisanutto and Dilano Van T’Hoff (Exprit/TM Racing/Bridg).

Bortoletto was alone in third place securing this position until the end of the race. Meanwhile, up in the lead of the race Patterson managed to almost get a second of gap between him and Taylor Barnard, but the Rosberg Racing driver reacted, and in the second half of the race he reduced the gap drastically.

Barnard caught Patterson, and in the last lap both British drivers fought for the race victory which finally was for Dexter Patterson by 0.040 seconds. The 2017 Junior World Champion secured as well the title, replacing Hannes Janker in the Hall of Fame as WSK Super Master Champion in OK class.

Barnard secured second position in the championship while the 6th place of Lorenzo Travisanutto in final secured a triumphant one-two-three for Kart Republic chassis in the drivers’ standings.

The WSK races does not stop, and next weekend the WSK Euroseries is back for his first race of the season that will take place at the Circuito Internazionale di Napoli.

The Official Calendar for the 2018 Italian F.4 Championship powered by...

Final races at the 4th round – Night Event of the...