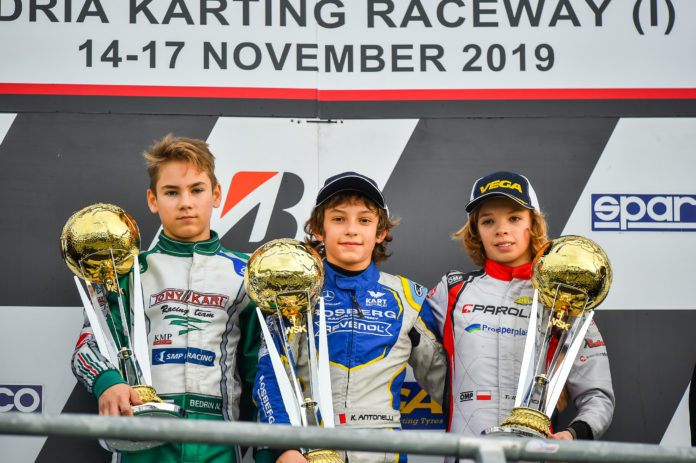 Andrea Kimi Antonelli continues as the reference driver of OKJ as he won the WSK Final Cup at Adria Kart Raceway. The Italian dominated the race despite Nikita Bedrin’s efforts to stop him. Bedrin finished second while, Kucharczyk completed the podium. 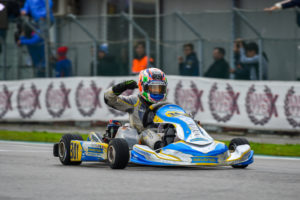 In a still very wet track, the OKJ drivers started the prefinals with a difficult track conditions but without the rain falling on track. Andrea Kimi Antonelli (KR/Iame/Vega) once again proved another masterclass in driving. The Rosberg Racing Academy driver won by almost 8 seconds in front of Nikita Bedrin (Tony Kart/Vortex/Vega) who was able to overtake Tymoteusz Kucharczyk (Parolin/TM Racing/Vega) and Martinius Stenshorne (KR/Iame/Vega) in the latest laps of the race.

In prefinal B, the top 3 was unmovable since lap one, with Robert de Haan (Energy/TM Racing/Vega) leading the way in front of James Wharton (Parolin/TM Racing/Vega) and Arvid Lindblad (KR/Iame/Vega). But the big focus of the race was the comeback of William Siverholm (Tony Kart/Vortex/Vega) who spun at turn 1, was running last in the opening lap and managed to qualify for the final.

In the final, Nikita Bedrin wanted so bay to take the victory in his last OKJ race. The Russian took the lead at the start and was leading for a few laps until Antonelli reached him again and passed him.

Antonelli then, pulled away to take another dominant victory in OKJ as Bedrin secured second place.

More open it was the battle for the last step of the podium. Martinius Stenshorne was in the third place during the opening laps but he clearly was unable to keep the pace of Antonelli and Bedrin. The Norwegian driver caused a big group battling for third with Ugo Uguchukwu (FA Kart/Vortex/Vega) and Tymoteusz Kucharczyk (Parolin/TM Racing/Vega) followed him among many more drivers. At the end, Kucharczyk managed to overtake the Rosberg Racing driver to take the last step of the podium.

The Racing Team Ready For The First Round Of Wsk Final...

WSK Final Cup: the best drivers after the Heats