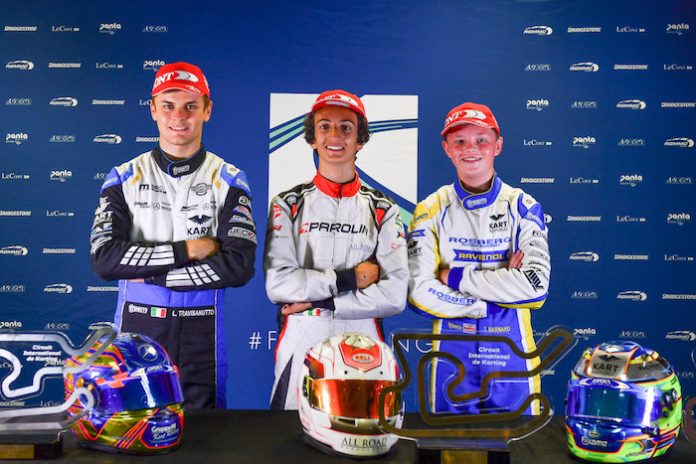 It has been as easy as it may look but Lorenzo Travisanutto has crowned 2019 FIA Karting European championship at Le Mans during the final race of the season. The Italian finished second and had enough to beat title contenders Gabriele Minì -who won the race, and Dexter Patterson who had to retire.

The last day of the season started with drama as in the qualifying heat E-F, Frans-Emil Saarijavi (KR/Iame/LeCont) was involved in a big crash that also affected Genís Cívico (Croc Promotions/TM Racing/LeCont), Maya Weug (Birel Art/TM Racing/LeCont) and Luke Brandon Füngeling (Sodi/Iame/LeCont). The race had to be red flagged.

Despite this accident and with the drivers using different strategies in terms of tyres management, Kobe Pauwels (KR/Iame/LeCont) secured the pole position for the final in a one-two for CV Performance with the reigning World Champion Lorenzo Travisanutto (KR/Iame/LeCont) in second position.

At the start of the final, Pauwels managed to stay in the lead despite the big pressure from Kirill Smal (Tony Kart/Vortex/LeCont) and Kas Haverkort (CRG/Iame/LeCont).

Haverkort immediately overtook Pauwels for the lead in the following lap and the same did Smal. But then, Smal also tried the move over Haverkort and took the leadership for only a few corners as the Russian retired after spun off.

In the same lap (lap 5), Gabriele Minì (Parolin/TM Racing/LeCont) overtook Haverkort for the lead. The Italian then had no rival and pulled away to take the victory.

Travisanutto was struggling on pace, the Italian was down to sixth place with three laps left, which meant that a new position lost would mean the lose of the championship. But a post-race penalty to the second classified Joe Turney (Tony Kart/Vortex/LeCont) together with a contact between Taylor Barnard (KR/Iame/LeCont) and Luigi Coluccio (Birel ART/TM Racing/LeCont) in the last lap of the race, allowed Travisanutto to finish in an unexpected second position as Barnard completed the podium. 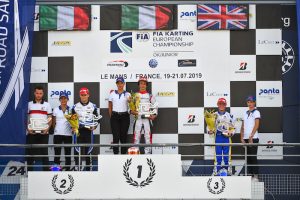 The championship closes with Lorenzo Travisanutto as the new champion with a total of 97 points, 11 more than Gabriele Minì and 13 more than Dexter Patterson.

Now all the drivers will have time to relax before approaching the following and most important event of the year, the FIA Karting World Championship that will be held in September at Alaharma, Finland.

European OK Champs: Travisanutto continues unbeatable in the finals as he...