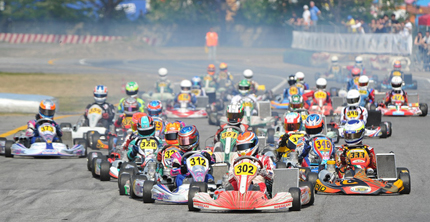 A few days from the end of 2011, ACI-CSAI presents “its” new season: with lots of news on several fronts.

Beginning with the CSAI Karting Italian Championship we immediately find out that the new season will be over 5 rounds (instead of 6), with the entry of two new tracks for round 2 and 3: the Pista Salentina in Ugento (Lecce) and the Siena International Circuit. News also regarding the categories that will participate in the events following the opening race on the Napoli International Circuit in Sarno on May 13th: in fact, besides KF2, KF3 and KZ2 and the 60 Mini the rounds in Ugento (June 3rd), Siena (July 29th) and Lonato (September 2nd) open up to the 60 Baby; while the final race in Ortona (September 30th) will also see Provider drivers vie for the category Trophy ona single match.
The big news for the CSAI karting Area Cups (each on 8 rounds) is their grouping in 5 macro-areas (see below) and the possibility for drivers to also race in an Area Cup other than the one in which they are residents (the residence requirement instead remains for standings points). Regional Tournaments with facilitated access have also been instituted,  to promote competitive karting at a local level.
And there’s another novelty for both championships: the Provider absorbs the  “Italia” category with new sporting regulations featuring two license classes: the PRO (for former 100 and 125 Italia drivers and for the top three Provider 100 and Provider 125 drivers of the 2011 CSAI Area Cups) and the AM (for everyone else); in addition work is underway to institute the new “Entry Level” category, which will be on track in 2013.