Home Events More than 360 entries in Lonato for the second race of WSK... 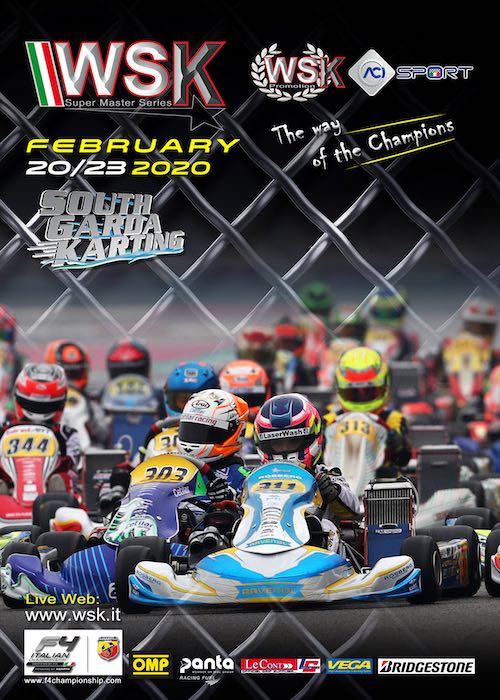 The WSK Super Master Series is ready to face the second outing of the season from February 20th to 23rd at the South Garda Karting circuit in Lonato, that is about to score another important participation record. More than 360 drivers have already entered the event that will see KZ2 joining OK, OK-Junior and Mini that had already kicked off the 2020 season in Adria.

The big participation to this second round of WSK Super Master Series confirms the success of this international series that sees all the main teams and constructors challenging each other in a high profile competition. The participation record was scored last year in Lonato as 336 drivers made it onto the track, and the circuit is all set to repeat such a record as the presence is increasing and great in all the categories (108 Mini, 85 OK, 92 OKJ, 78 KZ2).

The standings after the opening round.

The WSK 2020 season kicked off from Adria with the WSK Champions Cup held on January 26th and continued in Adria on February 2nd with the opener of  WSK Super Master Series for the drivers of OK, OK-Junior and Mini. In Lonato the programme is going to be completed by KZ2 that will feature all the international champions of this shifter category.

After the opening meeting of WSK Super Master Series on February 2nd, the provisional classifications see the protagonists of Adria on top. OK lived on a quite tight battle for the win and the Spaniard Pedro Hiltbrand (Tony Kart-Vortex-Bridgestone) is currently on top leading his teammate from Great Britain Joe Turney and Taylor Barnard (KR-Iame), the Russian Kirill Smal (Energy Corse-TM Racing) and the Australian James Wharton (Parolin-TM Racing) that have all been shining in the Prefinal.

In OK-Junior the Italian Alfio Andrea Spina (KR-Iame) installed himself on top thanks to the double win in Prefinal and Final, when he led the Pole Karol Pasiewicz (Tony Kart-Vortex), who won his Prefinal and the American Ugo Ugochukwu (Kosmic-Vortex). The latter is third in the classification thanks to the second place in the Final, while the Brit Arvid Lindblad (KR-Iame) and the Asian Christian Ho (KR-Iame) are respectively fourth and fifth.

The classification of Mini is quite compact and is led by the two Russians Gerasim Skulanov (IPK-TM Racing), who won the Final, and Anatoly Khavalkin (Parolin-TM Racing), who was second at the flag in Adria and only 9 points shy of the leader. The Japanese Berta Kean Nakamura (KR-Iame) follows as he won the Prefinal but had to retire from the Final. Equal on points in fourth position are the French Jimmy Helias (Tony Kart-Vortex) and the Russian German Foteev (Energy-TM Racing).

Complete classifications are available at www.wskarting.it