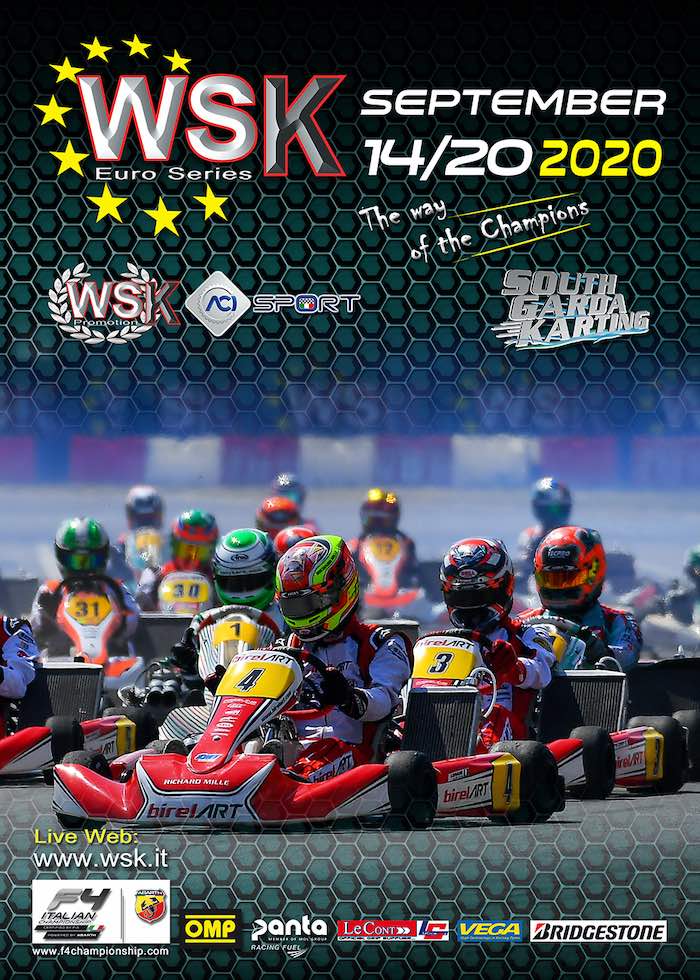 The WSK season is resuming full speed with the conclusion of WSK Euro Series as categories KZ2, OK, OKJ, MINI are getting on track at the South Garda Karting circuit in Lonato (Brescia, Italy) from September 14th to 20th for the second and third rounds of the season two months after the opener in Sarno. In Lonato, due to the Covid-19 emergency that affected the 2020 racing calendar, a new format will schedule Round 2 and Round 3 in one week. All the finals will take place on Sunday, September 20th.

AN EXCEPTIONAL LIST OF CHAMPIONS. A great and spectacular racing weekend will take place in Lonato with more than 240 drivers on track including a lot of champions in all categories. The presence in KZ2 is quite remarkable and reached 70 drivers. Despite the difficulties connected to the pandemic that is still hitting a lot of countries and making movements difficult, OK, OKJ and MINI will also enjoy a good participation of drivers. The provisional classifications of WSK Euro Series after the opener in Sarno are led by BirelART’s Riccardo Longhi (KZ2), by the British driver Oliver Gray of team Leclerc by Lennox (OK), the Czech Igor Cepil of team KR Motorsport (OKJ) and the Japanese Kean Nakamura Berta of Team Driver (MINI). Everything can still happen in Lonato because two more rounds are ahead and they will have an increased scoring system compared to the opener. A lot of points are therefore up for grabs in the Heats, Prefinals and Final which will make these title-awarding appointments very exciting. The Final of Round 2 will also name the Italian ACI Sport Champion of OK and OK-Junior.

Saturday 19: Qualifying heats Rd.3, Prefinals Round 2 and Round 3.

THE WSK EURO SERIES CLASSIFICATIONS AFTER ROUND 1

CRG HEADING TO PFI FOR THE SECOND ROUND OF THE EUROPEAN...