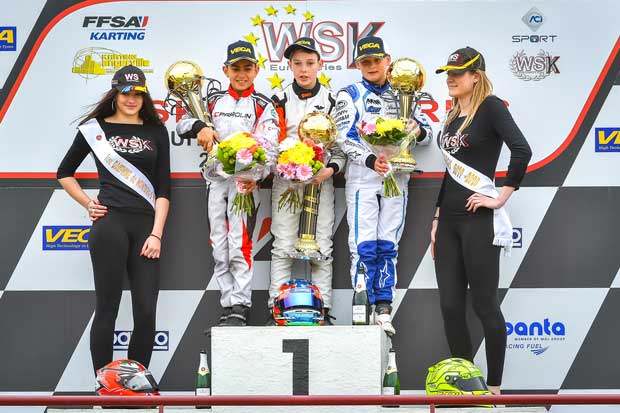 William MacIntyre has won the final in Mini class for the second round of WSK Euro Series at the French circuit of Angerville. The Team Driver Racing driver won ahead of Rashid Al Dhaheri and Ean Eyckmans.

Starting from 6th place in the grid for prefinal A, Alex Powell (Energy/TM Racing/Vega) comeback to win the race. The start wasn’t the best for pole sitter, Joel Bergstrom (KR/Iame/Vega) who was immediately passed by Frenchman Jimmy Helias (Tony Kart/Vortex/Vega).

Helias was leading the field in front of Powell who made a great start, but the Tony Kart Racing driver could not hold the Jamaican Sensation behind, who won the prefinal.

Starting from pole position in the final, Rashid Al Dhaheri kept this position at the beginning of the race. The Arabian driver managed to hold William MacIntyre behind him for 3 laps, when the British overtook the Parolin driver for the race lead. Also, Ean Eyckmans managed to overtook Al Dhaheri.

With three laps remaining, Eyckmans overtook MacIntyre, but the Kart Republic driver did not said his last word as he overtook again Eyckmans in the last lap for the race victory.

After another final victory, William Macintyre increases his points lead in the driver’s standings. The British driver has 165 points, while second is Alex Powell with 111 points; Al Dhaheri is third with 97 points.

The next round of WSK Euro Series will be at the classis South Garda Karting at Lonato, from 20th to 23rd of June.

Maranello Kart putting in good performances at the European Championship in...