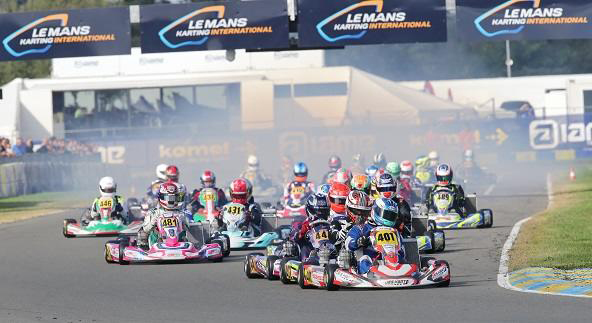 In blazing sunshine at Le Mans with temperatures almost reaching summer level, the marathon session of qualifying heats came to an end late on Saturday afternoon. While the quickest drivers were determined to clinch the best possible positions on the grid for their pre-final, which will be followed by the decisive final, many of them were aiming just to qualify for the all-important final phase on Sunday. And even before the outcome is known one can already bet on the fact that this new staging of the IAME International Final will go down in the annals of the 2017 sporting year in the world of karting.

X30 Senior: Oliver Hodgson dominates
Briton Oliver Hodgson was unlucky in the 2016 final after coming first in the pre-final so he was out for revenge. He won several heats and topped the time sheets leaving no fewer than 143 drivers in his wake! His fellow-countrymen Mark Kimber and Sean Babington were also very quick and ready to take the fight to him. Former Rotax specialist, Frenchman Charles Tesnière, was particularly at home in X30 with a superb third place in the combined results. In total 15 drivers won at least one heat!

X30 Junior: Thompson makes a fantastic comeback!
English driver Harry Thompson was a bit disappointed as he could do no better than the 30th time on Wednesday evening. He went pedal to the metal con brio and pulled off the incredible feat of winning his seven qualifying heats! The slightest glitch was enough to prevent a driver from making it into the top 10 in the provisional classification. Dutchman, Tijmen Van der Helm, Frenchman Hadrien David, O’Neill Muth from Germany and Antoine Potty from Belgium all navigated the marathon of the qualifying heats successfully and will start the pre-final just behind Thompson.

X30 Master: Gérard Cavalloni takes the lead
Four drivers shared the victories in the six qualifying heats: Frenchman Gérard Cavalloni, Australian Kip Foster, who each won twice, Graham Hill from Britain and Jérémy Peclers from Belgium. But the latter was involved in a collision in his first heat and lost precious points so the 2016 winner finished in 14th position. Quick, consistent French driver Nicolas Duchateau slotted into third between Cavalloni, Foster and Hill. But many are waiting to pounce starting with Wilfrid Lecarpentier from France, 8-time winner of the 24 Hours for Karts!

X30 Veteran: three drivers qualified
The over-45 drivers are also part of the Masters field but only three made it into the final phase. The title could boil down to a scrap between two Frenchmen, Franck Rouxel and Willy Runget, as Japanese driver Hiroyuki will be starting much further back down the grid in the pre-final, although the final always springs its fair share of surprises. For the drivers who haven’t qualified there may be a place to grab alongside them in case of victory in the B Final.

X30 Super: Ulysse De Pauw makes a big impression
Adrien Renaudin who set pole on Thursday kept his position, but Belgian driver Ulysse De Pauw made a big impression with three consecutive wins. Behind, there were good scraps between Frenchmen Kevin Breysse, Thomas Ricci and Corentin Collignon without forgetting another Belgian, William Godefroid. Renaudin suffered a technical glitch in one of the heats, and he will have to go pedal to the metal in the pre-final to move up the time sheets from his current eighth place.

X30 Super Shifter: Pellizzari in front despite a minor hiccup Alessandro Pellizzari has got this IAME final off to a flying start. While Tom Bale pipped him for pole, the Italian then won three qualifying heats on the bounce. Bale, though, beat him in the last race and in addition he was penalised for not respecting the starting procedure. But this didn’t prevent him from consolidating his place as leader in front of drivers who opted for steadiness like Dutchman Roy Bakker, Belgian Thierry Delré and Gerard Cebrian Ariza from Spain. Bale was forced to retire in one heat dropping him back to seventh in front of Huibers who could also have been better placed without an incident on Thursday.

X30 Mini: Ugochukwu rewarded for his efforts
American Ugo Ugochukwu started three times in 11th place, but managed to turn the tables in his favour by fighting his way up to first place after the three heats helped by two victories. Dutchman Bart Ploeg also won a race, but was unable to stamp his authority on the other two. He will start the pre-final in fifth position behind Mateo Rubio Luengo from Spain, American Brent Crews and another Spaniard, Maximus Mayer.

6th round of the Italian F.4 Championship powered by Abarth