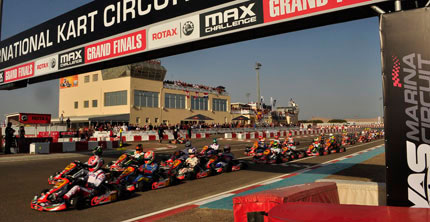 The 12th Rotax MAX Challenge Grand Finals came to an end last weekend on the circuit in Al Ain, United Arab Emirates (UAE). The winners of the four categories of the single-brand competition by Rotax come from 4 nations and 4 continents, sign of the incredibly international flavour of an event that featured 265 drivers from 52 different countries at the start.

Triumph in the MAX Junior (raced with Birel chassis) went to the Japanese Ukyo Sasashara, who finished ahead of Mawson (Australia) and Singleton (UK).

In the shifter DD2 (CRG chassis) victory went to the Canadian Pier-Luc Quellette, ahead of Pringle (Australia) and Vann (Estonia).

Finally, in DD2 Masters (Haase chassis for all), the South-African Cristiano Morgado dominated the category final over Brand (Belgium) and Berteaux (France).

A truly international event, considering that Australia, nation from the only continent left empty handed as far as individual titles go, got the Nations Cup, thanks to its team’s great races.

Next year’s date for the International Final is December 1st 2012 in Portimao (Portugal), but first participants will have to qualify in the various national Rotax championships around the world that are all set to go.