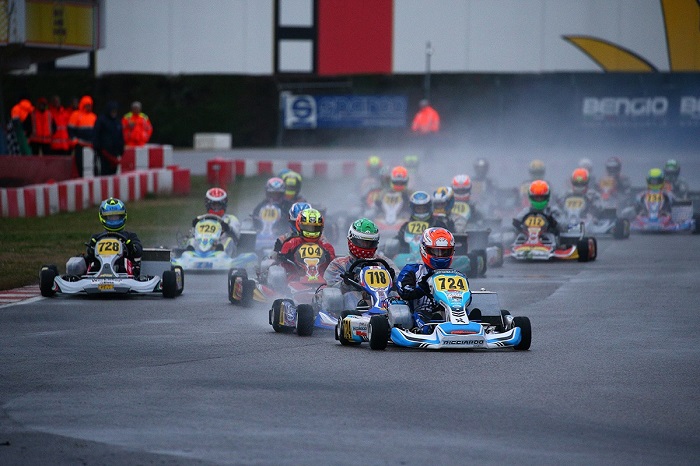 The 29th Spring Trophy has kicked off with the first of the two races that produced a top class spectacle and had a great participation of 204 drivers partaking in the national categories, Iame X30 Trophy and on the legendary Pre2000 karts in the Nations Cup KFA 100cc Series.

Weather threw a tantrum and switched from the springy of the eve to the rain of the final stages, which challenged even further the drivers on track.

This event has been interesting for several reasons, starting from the competitiveness of the drivers partaking in the national categories like KZ2 that produced an exceptional spectacle, to the confirmation of the positive trend of the Iame X30 Trophy that has set the new participation record with 122 drivers at the start, and the charm of the Pre2000 100cc karts that have made the history of national and international karting.

In KZ2, Massimo Dante (Maranello-Tm) has been very quick since qualifying and posted the pole position time, but the Italian had to give up in the Prefinal due to a puncture to a rear tyre of his kart. The Italian William Lanzeni (Ricciardo-Tm) got the most of it winning the Prefinal and Final, leading Fabrizio Rosati (CRG-Tm) and the Swiss Christoph Hold (Maranello-Tm), while Giuseppe Fusco (Formula K-Vortex) was pushed down from P2 to P4 for jumping the start. Dante put in a great recovery in the Final though. Started from the back, he managed in fact to climb all the way up to P4. The Spanish driver Marta Garcia Lopez (CKR-Tm) closed this difficult race on the wet in 26th place.

The victories of the other national categories went to Selina Prantl (CRG-Tm) in OK-Junior, to the Swiss Kiano Blum (CRG-Tm) in 60 Mini and to Filippo Sala (CRG-Lke) in Entry Level.

In the Iame X30 Trophy, the national series opened with 31 drivers at the start of X30 Mini. The victory went to Andrea Donati (Energy-Iame), following a 3s time penalty handed to the driver that crossed the finish line as first, Daniele D’Urso (BirelArt-Iame). Ludovico Villa (TB Kart-Iame) did not have too many problems in taking the win in X30 Junior (grade with 36 drivers at the start), while Vittorio Maria Russo (Tony Kart-Iame) won X30 Senior (38 drivers at the start) after a penalty given to Matteo Nannini, who had crossed the line on top. The victory of X30 Master went to Andrea Monaci (Tony Kart-Iame), while Francesco Doria (FA Kart-Iame) won X30 Super.

In the Nations Cup KFA for historic karts, the British driver Neil McKernan dominated the scene on Tony Kart-Iame, while Davide Cattelani won the battle for the second step of the podium and led the other Brit Nicky Taylor (PCR-Italsistem). Luca Corberi, the master of ceremonies and organizer of this series that will also feature races in Jesolo and Castelletto, was fourth on his Tony Kart-Vortex. The Dane Jonas Willadsen (Pcr-Pcr) was fifth instead.

The closing race of the Spring Trophy will take place in Lonato next weekend (March 25th) with national categories to be joined by the Rok Cup categories, that will compete for the opener of the North Italy Area.

All results are available at www.southgardakarting.it.

Entries accepted for the South Garda Karting Trophy to be held...