Home Events Great duels in Sarno in the qualifying heats of the Italian ACI... 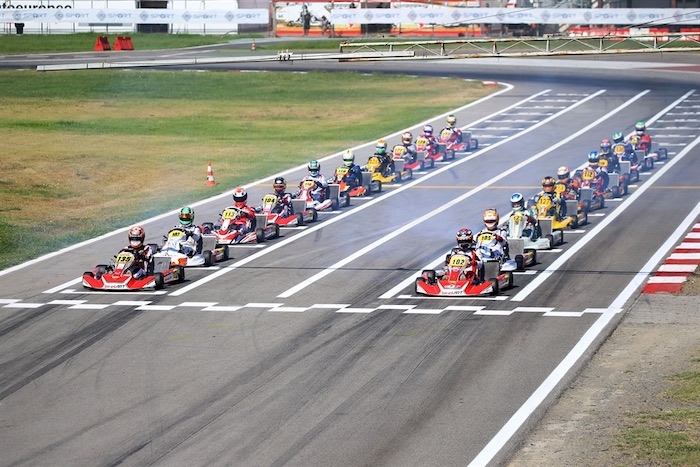 In Sarno battles in all categories for conquering the best positions in the starting grids of the final phase on Sunday 30 August. Live TV on MS MotorTV and streaming on ACI Sport from 9:40 am and 1:40 pm.

An endless series of duels characterized the second day of competition of the Italian ACI Karting Championship in Sarno (Salerno) in the qualifying heats on Saturday for the definition of the starting grids for Race 1 on Sunday 30 August. It is a second round full of many protagonists and beautiful head-to-head that are taking place on the track of the Naples International Circuit, with about 160 drivers present in the categories KZ2, MINI Group 3 International of new CIK-FIA homologation, 60 Mini Nazionale and the two categories IAME X30 Junior and X30 Senior.

Sunday 30 August will be the time of the final phase, for all categories with Race 1 and Race 2 with an inverted grid in the first 8 positions, live on TV from 9:40 am and 1:40 pm on MS MotorTV (Sky channel 228 and digital terrestrial ), streaming on the ACI Sport website and Facebook page of the Italian Championship @ACIKarting.

Cunati and Palomba, an endless duel in KZ2.
In KZ2 another duel took place between the reigning Italian champion Simone Cunati, on BirelART-TM with Team Modena Kart, and home driver Giuseppe Palomba, on BirelART-TM with Team LG Motorsport. After the pole position in practice conquered by the driver from Como, Cunati also managed to win the first of the two heats, but almost always with the “breath on his neck” of Palomba, who reached the finish line in the wake of his rival by completing the fastest lap. fast. A good third place went to Davide De Marco (Team Driver / KR-Iame), ahead of Mirko Mizzoni (Italcorse / Italcorse-TM), Giuseppe Fusco (Tony Kart-Vortex) and Giuseppe Rendina (CRG-TM). Seventh and recovering was the Sicilian Angelo Lombardo with VRT Motorsport on Parolin-TM, eighth Antonio Piccioni (DFM Racing / DFM-TM), while the ninth and tenth position went to the two color bearers of TK Kart Technology, Loris Spinelli and Alexandre Arrue, both on TK-TM.
In the second heat Palomba immediately went on the attack with an immediate overtaking on his direct opponent already on the first lap, then finishing in first position, followed by Cunati and again by De Marco, and with a faster lap still in favor of Palomba. Lombardo, winner of Race 1 at Triscina, continued to recover positions up to fourth place, ahead of Rendina, Fusco and Mizzoni. Spinelli finished eighth, while Danilo Albanese of Team Driver on KR-Iame, after retiring in the first heat, recovered up to ninth position. Salvatore Gentile (BirelART-TM), nested was tenth
The KZ2 classification after the heats: 1. Cunati; 2. Palomba; 3. De Marco; 4. Mizzoni; 5. Fusco; 6. Lombard; 7. Rendina; 8. Pigeons. 9. Dear; 10. Arrue. 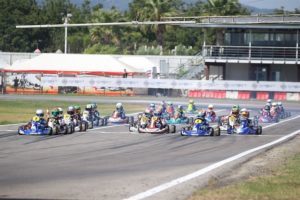 MINI International in the hands of Japanese Nakamura.
A great competitive spirit was also confirmed by the very young of the MINI Group 3 International, dominated in the top positions by the many foreigners also present in this second round of the Italian Championship. For now, the Japanese Kean Nakamura-Berta on Team Driver’s KR-Iame has prevailed, winner of both heats in which he took part. In the third heat it was the other Team Driver driver, the Swiss Kian Fardin Sharabian on KR-Iame who won this qualifying race even in the ranking and is behind for having been late in his other heat. Pole Jan Przyrowski on Parolin-TM of Team AV Racing confirmed himself among the fastest ever, author of a second place after having had to settle for a sixth position in the brawl of the first heat. Also excellent was the performance of Dutchman René Lammers, son of former F1 driver Jan Lammers, in the race with Team Baby Race on Parolin-Iame, who gained the third overall position with two positive placings. Among the Italians, Antonio Apicella of Team Driver on KR-Iame was the best for now, fifth in the overall ranking.
The MINI Gr.3 International ranking after the heats: 1. Nakamura; 2. Przyrowski; 3. Lammers; 4. Egozi; 5. Apicella; 6. Keeren; 7. Monza; 8. Gladysz; 9. Martinese; 10. Hideg.

In the Mini Nazionale Sala is confirmed in first place after the leading the practices.
Regarding the duels in the race, not least the evolution of the two heats for the 60 Mini Nazionale, where the best position after the heats was gained by Filippo Sala on Parolin-TM of the Team Driver, who already signed the pole position in qualifying and in race of a success and a third place. Same result, with a success and a third place, for Salvatore Alfio Sardo on Intrepid-TM. Paolo Sacco of Team AV Racing on Parolin-TM makes a comeback with two places, and of the Sicilian winner of Race 1 in Triscina Daniele Schillaci, the other Team Driver driver on Parolin-TM. Fabio Reale on IPK-TM also grabs a good starting position in Race 1 on Sunday.
The Mini National ranking after the heats: 1. Sala; 2. Sardinian; 3. Sack; 4. Schillaci; 5. Real; 6. Bruscino; 7. I knock; 8. Blanco; 9. Spiezio; 10. Frasca. 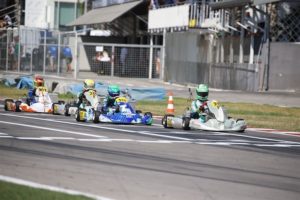 Scognamiglio leader in the IAME X30 Junior.
What a fight in the IAME X30 Junior!Even if the wins went to the Slovak poleman Lukas Malek, on Parolin-Iame of Team Zanchi Motorsport, and to Rocco Mazzola of Team PRK on Tony Kart-Iame in the other heat, it was the Neapolitan Manuel Scognamiglio who went to the top of the provisional classification with Tony Kart-Iame of Team Gamoto, thanks to two second places that propelled him to the top of the ranking. Scognamiglio, who we remember dominating the last race in Triscina, will therefore start in pole position in Race 1 on Sunday, ahead of Malek and Mazzola, while Sebastiano Pavan of Team Driver on KR-Iame has taken the fourth position thanks to a third and sixth place . Fifth overall position for the Brazilian Miguel Costa on Team Sauber’s KR-Iame and sixth position for Valerio Proietti on Team Giugliano’s KR-Iame.
The classification of the IAME X30 Junior after the heats: 1. Scognamiglio; 2. Malek; 3. Mazzola; 4. Pavan; 5. Cost; 6. Project; 7. Bouzar; 8. Olivieri Flavio; 9. Foot pocket; 10. Chestnut.

Comanducci chased by Carenini in the IAME X30 Senior.
Cristian Comanducci on Tony Kart-Iame of Team PRK, winner in Triscina, in Sarno found a valid opponent, alias Danny Carenini on Tony Kart-Iame of Autoeuropeo Motorsport Team. After the pole position in qualifying, Comaducci also won in the first heat, but in the second he had to suffer the successful attack of Carenini. The two drivers, who both turned out to be at a high level, went to occupy the first row for Race 1, with Comanducci on pole and Carenini next to him. It will certainly be a first final to follow. AN excellent third place in the heats went to the winner of the Italian X30 Junior Championship, Francesco Pulito, on CRG-Iame of Team Sporting Club Martina. Fourth position for Mattia Ingolfo of Team Driver on KR-Iame, and fifth for the excellent Liberato Milano of Team TMotorsport on Tony Kart-Iame, ahead of Pio Francesco Sgobba of Team Giugliano on KR-Iame.
The classification of the IAME X30 Senior after the heats: 1. Comanducci; 2. Fairings; 3. Clean; 4. Ingolfo; 5. Milan; 6. Grind; 7. Croccolino; 8. Maccari; 9. Martucci; 10. Scognamiglio Francesco Pio.

LIVE TV AND STREAMING. Sunday 30 August live TV on MS MotorTV (Sky channel 228 and digital terrestrial), live streaming on the website and Facebook page of the Italian ACI Karting Championship from 9:40 am and 1:40 pm. Deferred on Sportitalia. Television reports within the ACI Sport Magazine on RAI Sport, national broadcasters, web and area broadcasters throughout the country.

The Official Calendar for the 2018 Italian F.4 Championship powered by...