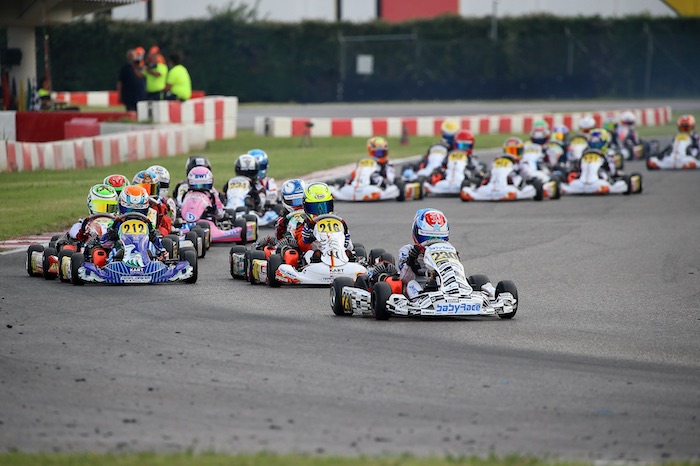 The first round of the 30th Autumn Trophy at South Garda Karting in Lonato was held with good participation in the national categories Entry Level, 60 Mini Nazionale, MINI Gr.3 International, KZN and KZ2, with 140 drivers in track also valid for the second round of the ACI Karting Regional Championship of Lombardy, Piedmont, Valle d’Aosta and Liguria.

Hold wins the final of KZ2

In KZ2 it was Alessandro Buran on BirelART-Vortex who signed the pole position in qualifying, confirming himself as a winner also in the Prefinal ahead of Christoph Hold on Maranello-Tm. In the Final, however, it was Hold who took over and won the final race, ahead of Buran and Giacomo Pollini (Formula K-Tm) recovering from sixth place in the Prefinal. However, the winner of the last three editions of the Autumn Trophy, Massimo Dante (Maranello-Tm), failed to conquer the podium, having to settle for fourth position.

Dominion of Tuia in KZN Junior

The KZN Junior was a beautiful final, with Denis Tuia on BirelART-Tm the winner after an initial advantage from Andrea Pastorino, also on BirelART. Tuia dominated the category after obtaining the best time in qualifying and the victory also in the Prefinal. Third place went to Francesco Coassin (Formula K-Tm), author of a great recovery from tenth position in qualifying and seventh place in the Prefinal.

Super Magnani in KZN Under

Flawless victory for Alberto Magnani (BirelART-Tm) in KZN Under, with pole position in qualifying, success in the Prefinal and finally success in the Final. In both races, Daniele Spada (BirelART-Tm) and Michele Locatelli (TB Kart-Tm) ranked second and third. Michael Dalle Stelle (Maranello-Tm) was penalized by 10 seconds, who dropped from third place to fifth in the Final.

In KZN Over it is a duel between Curti and Griggio.

In KZN Over the main protagonist in qualifying and in the Prefinal was Cristian Griggio, on Maranello-Tm, but in the Final it was Cristian Curti on Tony Kart-Vortex who won thanks to a perfect start in the final race. In the Final, Griggio tried to recover the first position, but Curti’s response was always on time until he crossed the line in first position in a sprint finish with Griggio. Third was Manuel Marcon.

In the MINI International Lammers wins, in the Mini National Hall.

The MINI Group 3 International saw the presence of 38 drivers, also in view of the round of the WSK Euro Series which will be held at South Garda Karting in the week of 20 September. In the duel in the lead the Dutch René Lammers got the better of Parolin-Iame, son of former F1 driver Jan Lammers, winner of the final after a sprint with Slovenian Mark Kastelic on KR-Iame. The Slovenian’s teammate, Antonio Apicella, was also among the best ever, who went on to take third place on the podium in front of the Asian driver Tiziano Monza also on KR-Iame.

In the 60 Mini Nazionale the top duel mainly involved Filippo Sala and Gabriel Moretto, both on Parolin-Tm. At the end Sala prevailed in a sprint finish ahead of Moretto, third was Paolo Russo (KR-Tm).

Entry Level in Gryc, with 21 participants.

Excellent presence in the Entry Level, with a line-up of 21 drivers confirming the positive trend that the category is achieving. After the pole position in practice conquered by Giuseppe Noviello (FPK-Tm), in the Prefinal and in the Final the success went to Bruno Gryc (Parolin-Tm) in both races ahead of Noviello. Excellent third place achieved by the young Russian Sofia Povazhnaia (Parolin-Tm).

Following the provisions to contain the spread of Covid-19, the event was held behind closed doors. All the results on the website www.southgardakarting.it.

The final round of the Autumn Trophy is scheduled for 11 October, on that occasion, in addition to the National categories, the ROK and KFA categories will also be on the track for the Nations Cup.

Trofeo Easykart – 5th round of the season in Castelletto on...