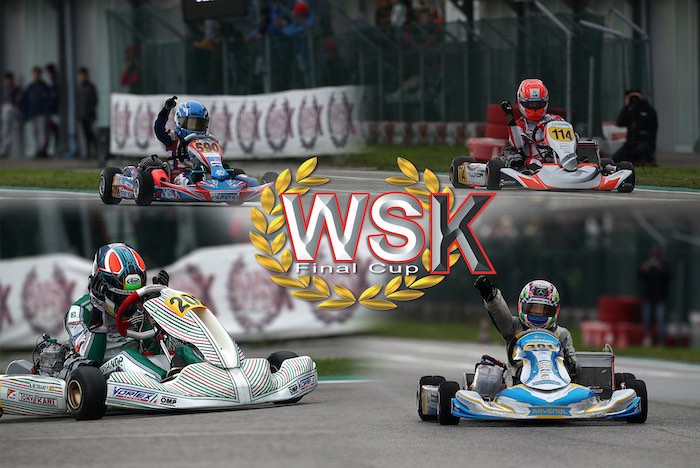 The 2019 season of the WSK finishes at Adria with the WSK Final Cup.

The extremely changeable weather created lots of troubles to the drivers taking part in the WSK Final Cup at the Adria Karting Raceway. Only in the final phase, which closed the 14th season promoted by WSK, the rain gave a truce and the asphalt was dry during the Finals. Drivers are now looking forward the new 2020 season. The first event is scheduled at Adria on January 20th: it’s the WSK Champions Cup. 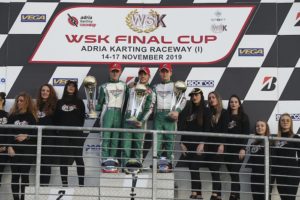 The Spanish Pedro Hiltbrand, from the fifth row, had a great start in the Final, which allowed him to recover positions and, finally, to pass the leader Lorenzo Travisanutto (both on Tony Kart-Vortex-Bridgestone), the winner of the Prefinal A. The Italian driver, who was no more the unbeatable driver of the qualifying stage, had to give in also to his other team-mate, the British Joseph Turney, the runner-up behind Hiltbrand, who seemed rather moved at the end of the race for his return to victory. Trevisanutto scored a final third place, while the winner of the Prefinal B, Hugo Sasse (Parolin-TM), made a great recovery to 8th after a rather troubled start. Above, the podium of OK Final, with on top the winer Hiltbrand, together with Turney and Travisanutto. 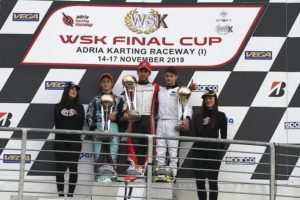 The Swedish Douglas Lundberg (Luxor-TM-Bridgestone) waited until the KZ2 Final was halfway through before grabbing the leadership. He overtook the French Jean Nomblot (SodikKart-TM) and the Italian Lorenzo Giannoni, the two leading drivers up to that moment. Excellent performance for the Italian Leonardo Bizzotto (Formula K-TM), who dropped to the last positions after a rather tricky start, and the British Harry Thompson (KR-Iame), who started from the last row: the two drivers managed to close the gap and to score the two remaining podium positions behind Lundberg. Not very lucky the Italian Matteo Zanchi (GP-TM), the winner of the Prefinal, who dropped back to the 6th place. Above, the podium of the KZ2 Final, with the winner Lundberg together with Bizzotto and Thompson.

Andrea Antonelli is unbeaten in OKJ. 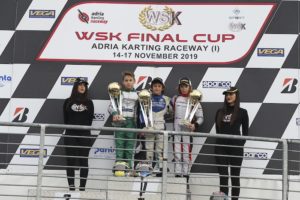 Nikita Bedrin (Tony Kart-Vortex-Vega) managed to stay ahead of Andrea Kimi Antonelli (KR-Iame) during the first laps of the OKJ Final, but then Antonelli (the winner in Prefinal A) took over the leadership and pulled away, winning the race. Behind Bedrin, the runner-up, the Polish Tymoteusz Kucharckzyk (Parolin-TM), 3rd after a recovery from the initial 7th position on the grid and overtaking the American Ugo Ugochuckwu (FA Kart-Vortex) in the last laps. Robert De Haan (Energy-TM), the winner of the Prefinal B, did not take part in the battle for the victory because he dropped back at the start. The Dutch, then, recovered and finished in 6th place. Above, the podium of OKJ category with the winner Antonelli together with Bedrin and Kucharckzyk.

Dmitry Matveev is the winner in 60 Mini. 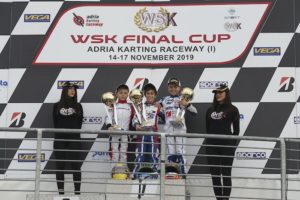 The Russian Dmitry Matveev (Energy-TM-Vega) remained only one lap behind his fellow countryman Anatoly Khavalkin (Parolin-TM), the leader at the start of the 60 Mini Final, after have won in Prefinal A. Matveev overtook Khavalkin and then cruised towards victory, always followed by Khavalkin. Great race for another Russian, Maksimilian Popov (Parolin-TM), who started from the 10th row and scored a final 3rd place. Not so lucky was the driver from Emirates Rashid Al Dhaheri (Parolin-TM): he was the winner of Prefinal B but only in P14 in the Final. Above, Matveev is celebrating his victory on the top of the 60 Mini podium. Close to him are Khavalkin and Popov.

Timing practice and qualifying heats at the WSK Final Cup in...

Over 200 drivers at the Adria Karting Raceway (I) for the...