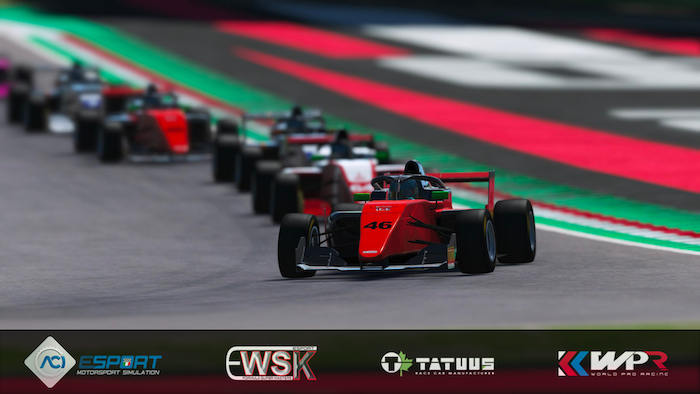 The qualifying stage of the EWSK Formula Super Master organized by WSK Promotion in collaboration with Tatuus is over. Yaroslav Shevyrtalov from Russia and Peruvian Luis Felipe Capamadjian, who both started from pole, won the two semifinals held yesterday evening on Tuesday 19 May on the virtual circuit of the Adria International Raceway.

Shevyrtalov also posted the fastest lap of Semifinal A, won by a margin of 4 seconds ahead of the Peruvian Miguel de los Rios and Santiago Ramos Reynoso, a young Mexican driver who made his debut in 2019 Italian F.4 Championship powered by Abarth with the team DR Racing by RP Motorsport

In the Semi-final B, however, Luis Felipe Capamadjian beat Sebastian Ogaard, who signed the best lap, while Ivan Berets, another protagonist of the Italian F.4 Championship Powered by Abarth racing with the DRZ Benelli team, took the flag in third place.

The top-24 list features also many kart drivers including Alex Dunne, Rodrigo Almeida and Theo Micouris (4th, 11th and 12th in semifinal A respectively), as well as David Liwinski, Andrey Zhivnov and Ugo Ugochukwu (4th, 6th, 7th) in Semifinal B)

At the end of this first stage, we can pretty much say that the EWSK Formula Super Master has proved to be a success. The engagement it has generated is demonstrated by the numbers: 72 drivers who tried to qualify, completing a total of 13,123 laps corresponding to about 35,000km.

At the end of the hotlaps, the first 34 drivers were enclosed in 1 second, 58 if we consider a 2 second interval.

The EWSK Formula Super Master, now that qualifying are over, “moves” to the virtual circuit of the  Autodromo Enzo and Dino Ferrari in Imola. The cars involved will also change: from now on, the Tatuus F.3 T318 will be used, the same used in the Formula Regional European Championship.

All those who have not managed to qualify straight to the final, and any potential new entrants, will be able to participate in further hotlapping sessions. The best 20 will line up, then, for the Last Chance Race, which will start on Saturday afternoon: the first 6 qualified will gain access to the finals, to be broadcasted live on WSK Promotion channels starting at 7.45pm.