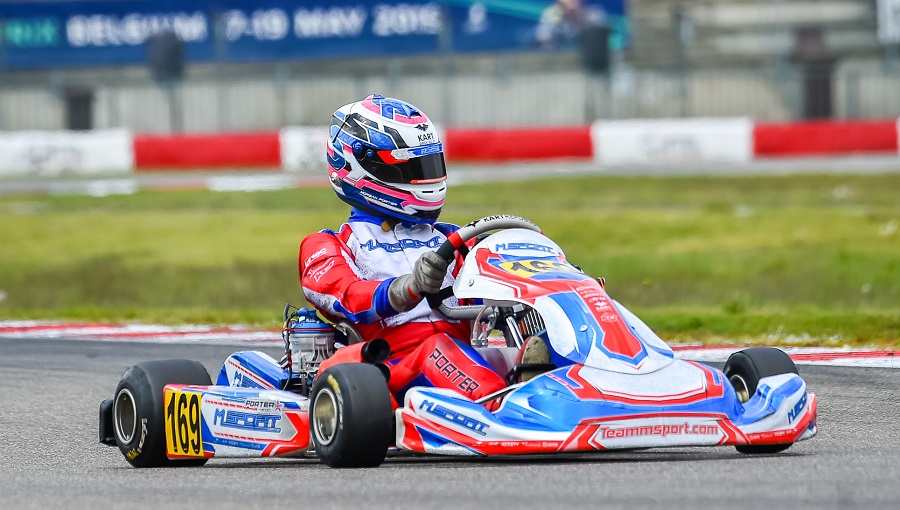 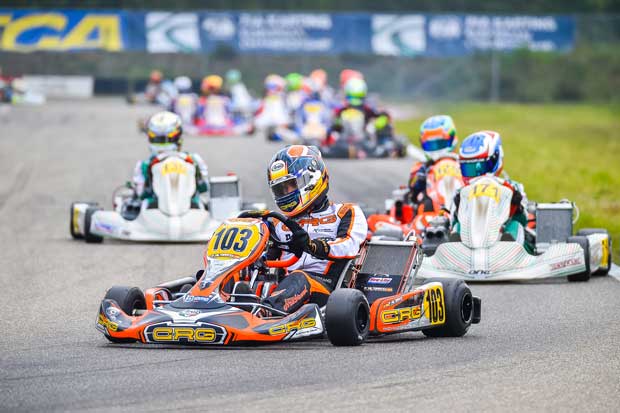 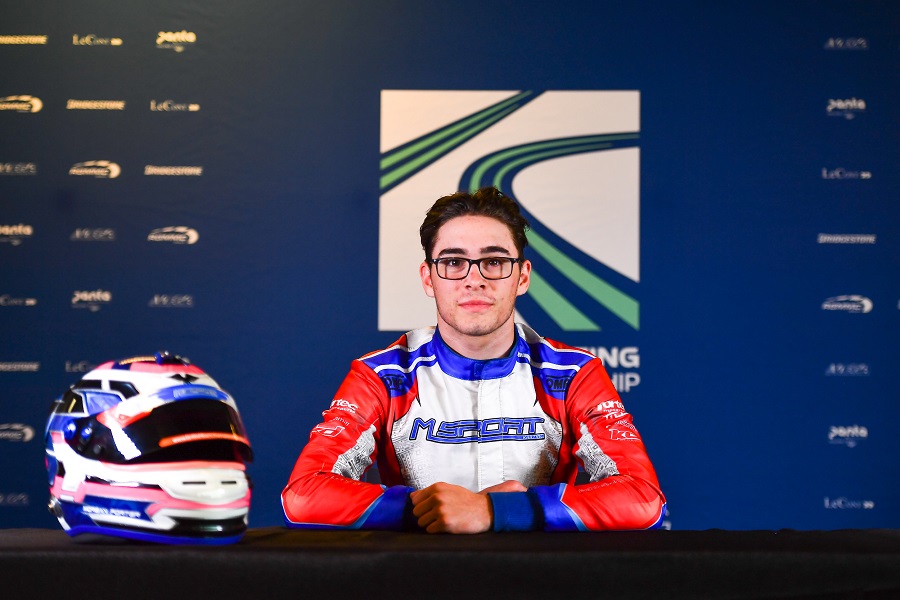 The day has been all about equality up in front and overall in the OK class. Morgan Porter (KR/Iame/LeCont) with his consistency in the lead is in provisional pole position with one heat victory (heat B-D). The British driver beat the reigning world champion, Lorenzo Travisanutto (KR/Iame/LeCont) in a very interesting duel.

But the M-Sport driver is tie with points with the 2016 World Champion, Pedro Hiltbrand (CRG/Iame/LeCont). The Spanish driver looks like he has finally found how to put CRG in front. Hiltbrand dominated heat A-E and he led in all the heats in which he contested, except heat A-C, but he always had a very strong rival who finally took the victory in the heat. In heat A-F the Catalan driver had to fight with Luigi Coluccio (BirelART/TM Racing/LeCont), in heat A-D was Travisanutto who was so strong, while in heat A-C it was Dilano Van T’Hoff (Exprit/TM Racing/LeCont) who dominated.

The rain that fell in the afternoon affected the last heats for OK class. Heat B-E had to be contested with wet tyres, it was the local driver Gilles Stadsbader (Exprit/TM Racing/LeCont) who beat Porter for the race victory.

Then the contestants in heat D-F had more doubts in which tyre use due to the rapid drying of the track. Finally, all contestants except, Kas Haverkort (CRG/TM Racing/LeCont) and Matias Salonen (KR/Iame/LeCont) went for wet tyres. This was the compound that worked out for the opening six laps, but after that, Dutch driver Kas Haverkort who yesterday was disqualified from qualifying practice started a very impressive comeback from P19 to P5 in only 5 laps.

Excellent recovery for Gabriele Minì (Parolin / TM Racing / LeCont), capable of great comebacks in all the heats. He was able to take several times the fastest lap in the race, despite the overtakes he had to do. 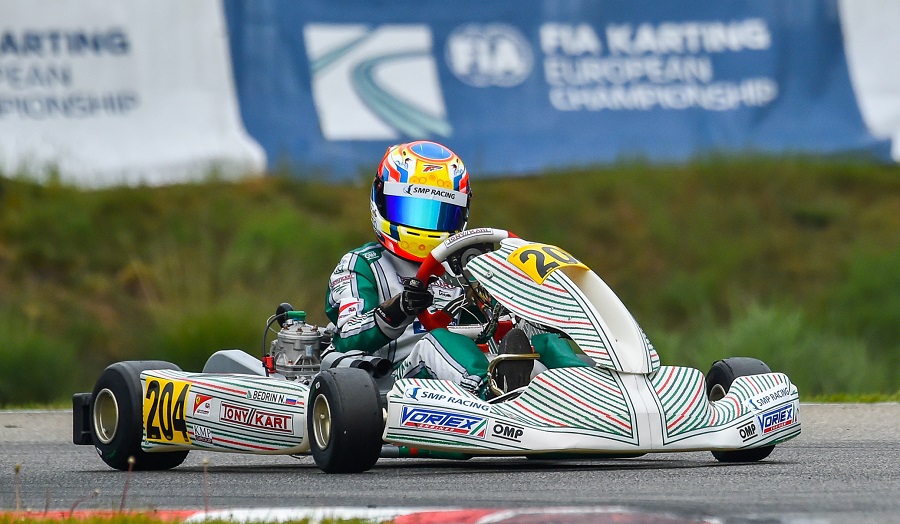 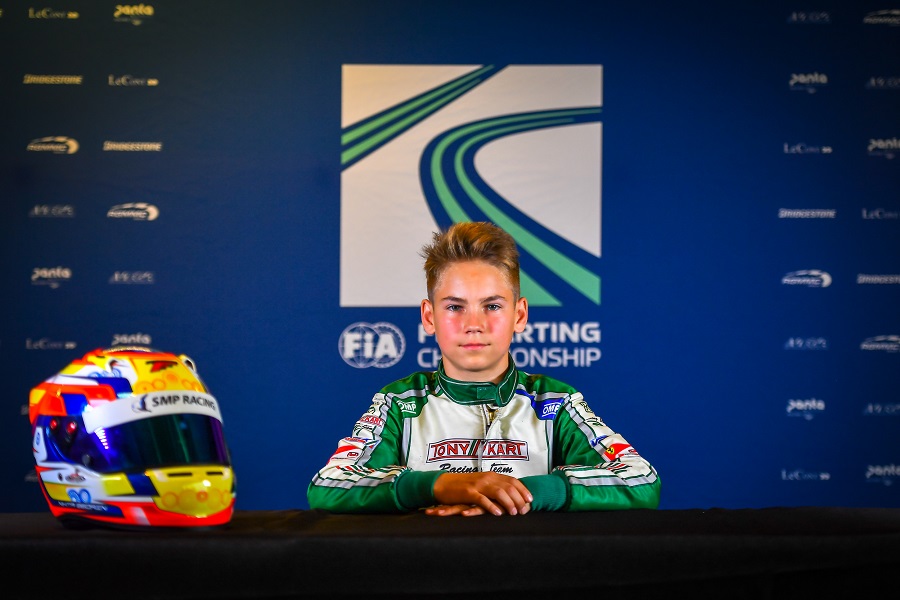 A perfect day for the official Tony Kart Racing driver, Nikita Bedrin (Tony Kart/Vortex/Vega) who has been untouchable in first place all day long during the four heats that the drivers contested today.

The Russian driver dominated well heats B-D, B-C and B-E but in heat B-F the Russian had to fight against his teammate Alexander Dunne (Tony Kart/Vortex/Vega) and DPK racing driver Dani Briz (FA Kart/Iame/Vega). After a great fight on-track, Bedrin managed to dominate the last laps and he finishes the Saturday on provisional pole position.

Also, a dominating day by Dunne. The unique Irish driver was dominating in the first two heats, while he could not beat Bedrin in heat B-F but in the last heat of the day, Dunne was not going to win (heat D-F). Marcel Kuc (Parolin/TM Racing/Vega) was going to take the heat victory but suddenly the rain started to fell and the Poland driver together with Jakob Bergmeister (Tony Kart/Vortex/Vega) lost the lead with 3 corners left. It was Dunne who finally took the victory in a very slippery last sector.

The OKJ class today had two red flag periods. The first one was cause in heat A-E due to three false starts caused by an incorrect pace from pole sitter Conrad Laursen (FA Kart/Vortex/Vega) who did not pack well the group.

The other one happened in heat B-C, in a crash at the back-straight of the circuit between Jamie Day (Exprit/Vortex/Vega) and Maxime Furon-Castelain (Kosmic/Iame/Vega) who needed the help from medical team, which caused the red flag with two laps remaining. The race was restarted later on for a new race of three laps that ended up with Bedrin victory.

Tomorrow the drivers will face his last qualifying heat before to know who are the 34 drivers who will get the access to the final in each category.