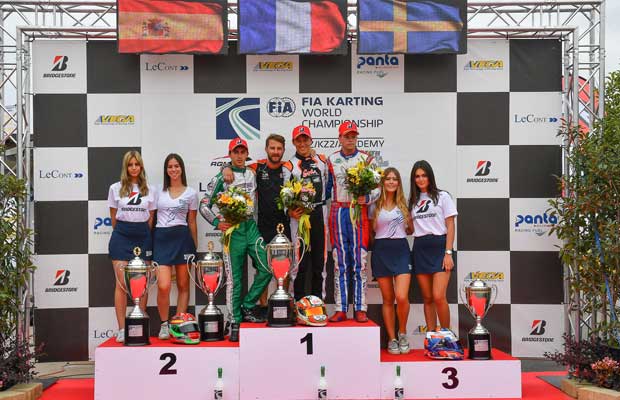 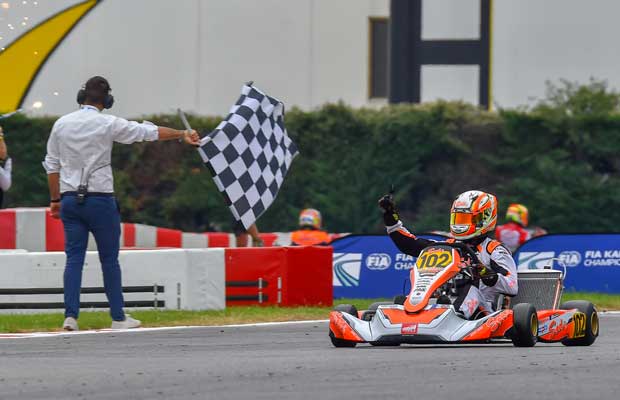 There was still a lot to decide in the KZ2 category this morning with four qualifying heats.

The final was one of the best races of the weekend, Denner starting from pole position kept his main rival Emil Skaras behind, they were followed by Marco Tormen, Giacomo Pollini and David Vidales.

But on lap 4 and for the first time in the whole weekend, Denner saw how Skaras overtook him for the lead of the race. Immediately, Denner made an aggressive move on Skaras who make him drop to 5th place.

Then Skaras had to start his comeback. The Swede first overtook Vidales for fourth on lap 5, then he caught Pollini for third, while Vidales took advantage of this move to move up to fourth.

And at half-point of the race both drivers overtook Tormen for second and third position but Denner already pulled away by 1.6 seconds. The Frenchman increased the gap up to 2 seconds when Vidales decided to overtake Skaras for second place.

Vidales showed a great pace from that moment and started to catch Denner but the Tony Kart official driver did not have enough time and saw how Emilien Denner took the victory and the 2019 FIA Karting International Super Cup by 7 tenths of seconds.

Denner won followed by Vidales and Skaras in the podium, Pollini and Van Walstijn completed the top5.